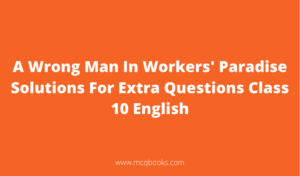 1. What does the line “the man never believed in mere utility” mean?

= The man accepted and appreciated every single thing even if it made no sense. He made beautiful, eye-catching paintings that had no meaning or took no effort.

2. What does the man do all day long?

= Having had no useful work, he indulged in mad whims. He used to make arts – men, ladies, etc. He painted. In this manner, he squandered his experience on everyone that was pointless, unnecessary.

3. How did the useless man turned out to be the lucky one?

= Despite doing any work, the messenger placed the idle man in the worker’s paradise.

4. How did the man reach the Workers Paradise?

= The messenger placed the idle man in the worker’s paradise by mistake.

5. What is missing in paradise?

= In Paradise, leisure was missing.

6. Describe the people of paradise.

= The people of the working paradise are very concerned about their work. They hardly waste their time on the useless thing. For them, art is nothing but wasting time. They do nothing but work all day long and stay happy.

7. Why is the torrent in the workers’ paradise silent?

= The torrent in the worker’s paradise is silent because it has no time to waste its energy in making the sound. Same as the people of paradise who never waste time on useless things.

8. Describe the girl who went to the torrent.

= The girl’s movement on the road was like the rapid movement of a skilled hand on the strings of a guitar. Her hair was anyhow done, inquisitive wisps peeped often over her forehead to peer at the dark wonder of her eye.

9. What does “hurrying feet” suggest?

10. Who is the person of comparison to a lonely beggar in the story?

11. What was the reason for the girl’s feeling pity?

= The girl was with a feeling of pity to see that the artist had no work, he was sitting alone.

= The girl offered him work to help him.

13. How did the man ask the girl to help him out? How did she react?

= The man asked the girl to give one of her pitchers so that he can draw on it.

The girl felt a bit annoyed when he asked for her pitchers to draw. She thought it made no sense, the drawing would not make any difference but was a waste of time.

14. What happened to the girl after she gave her pitcher to the wrong man

= After the man drew lines and colours to the pitcher, the girl got amazed by the drawing. The drawing impressed the girl much impressed that she kept thinking and looking at it again and again.

15. What did the girl do when the wrong man offered to make ribbons for her the next day?

= The girl gave her ribbon to the man immediately. She took more time to tie her hair. Her work did not concern the girl and started to waste time on unnecessary things.

16. Why did the elders of the Workers’ Paradise become anxious?

= The elder people of heaven got tensed as nothing was the same as before. The people who used to work the whole day, now they started wasting their time on useless things. The idle man influenced those who did no work all day.

17. How did the girl’s attitude change towards life and her work at the end?

= It was both the man’s impact and the girl was open-minded too. The girl who was first annoyed gave her pitcher to him for drawing. After the man put the lines and colors she loved his drawing. She observed it and was so impressed by his work that she even was ready to leave paradise with him. The girl who was so concerned with her works started wasting her time on useless things.

18. What did the elders decide for the idle man? How did the girl react to it?

= The elders asked the idle man to leave heaven because the people of heaven got influenced by him. They started wasting their time on useless things.

She didn’t think twice. The girl left the paradise with him at once. She bonded well with him. Her love for his works was real.

19. Characteristic sketch of the idle man.

= The idle man is an artist. He is the main character or the protagonist of the story. The idle man. always used to indulge himself in mad whims. He used to waste time painting, sitting idle. The idle man was a misfit in Workers paradise.

20. Characteristic sketch of the girl.

= The girl was very concerned about her work, she never used to waste a single minute on unnecessary things. Every day she used to carry her pitchers and go to the silent torrent to fill water. Her movement got compared to the guitar. She was so busy that she used to anyhow tie her hairs.

But after she drew in her pitcher, she was so amazed by her paintings that she kept observing them. She tried to find the purpose or the meaning behind those paintings. The girl was so lost that she became slow in her works. She used to spend more time on her hair and all other unnecessary things. The girl builds a bond with that man, she was ready to leave paradise with that man at last.

21. Discuss the two worlds portrayed in the story “A wrong man in the working paradise”.

= The story describes the two worlds: the world of the idle artist and the other people of paradise. The residents were always busy with their work. According to the time was the only precious thing and so they wanted to use its proper manner. They were happy with their work. They prayed to God to bless them with such works.

The young girl was so concerned about her work that she anyhow tied her hair. She moved in a fast-moving towards the silent torrent.

But everything changed, everyone got influenced by the idle artist.

The older people of heaven were very tensed. It was not the same as before. Now the people waste their time for nothing.

22. Is the title of the story appropriate?

= The title of the story “A wrong man in workers paradise” was quite apt. Workers Paradise is a place where people work all day long. They are so concerned about their work that they don’t waste their time if not necessary.

The messenger placed the artist in the workers’ paradise by mistake. He did no work all day long and sat idle. The little girl too got influenced. The young girl who used to get so worried about her works now began sitting around wasting time.