The Face On The Wall Textbook Questions And Answers in English, ICSE Board Class 8 makes it easier to understand the story. Understanding every detail of a story is important for scoring higher on an exam and expert writers have made sure that you know how everything flows together by summarizing perfectly! 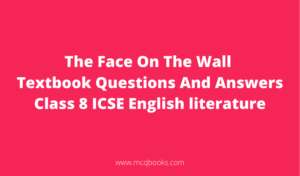 Edward Verrall Lucas was born in 1868 on 11th or 12th June in Eltham, Kent. He was educated at the Friends School. He belonged to a Quaker family. Also he was a great English humorist, poet, novelist and short story. Lucas joined the humorous magazine “Punch” in the year 1904 and worked there for the rest of his life. He wrote around 100 books.

1. On which topic were the people at Dabney’s having a discussion?
Ans: At Dabney’s play, a discussion was happening about the events that were beyond scientific explanations and that cannot be explained by natural causes.

2. What kind of experience did the little man narrate?

Ans: The little man narrated his own experience. At that time, he was staying an old house in Great Ormond Street. The room he was staying in was damp and the walls were painted by the previous tenant. This one time he was suffering from influenza. He had once spotted a face with proper features appear on the wall of his room when he was staying there. That face had a firmer grip on him.

After he got better, he searched for that face everywhere. He finally found the man and realised his name was Mr Ormond Wall. The little man fainted and when he gained senses, he was in a hospital in Boulogne. He went back to the old house and next morning he found out in the headlines that Mr Ormond was an American millionaire who had just met a motor accident and his condition was critical. The little man also noticed that the face on the wall had vanished.

3. What did the little man find on the wall of his room?

Ans: The little man found the face of a man on his wall. It had sharp features with a curved nose and a remarkable forehead.

4. What convinced the little man that a real man with a face like that on the wall existed? Where all did he try to look for that man?

Ans: The face on the wall made the little man very curious. He was somewhere convinced that such a man exists in reality. The face had a strange grip on him.

5. Where did he find the man, he was looking for? Why was he surprised to look at the visiting card of the man?

Ans: The little man was searching for that man everywhere. He found the man in a taxi driving east along Piccadilly. He began following the cab and reached Charing Cross. The man was standing there with a little girl and two women.

He was surprised when he saw the visiting card because it said Mr Ormond Wall. The house where he stayed was at the Ormond street where he had spotted the face on the wall.

Ans: ‘I’ here is the little man who has been narrating the story.

The face of the man that was present on the wall of his room filled the speaker’s thoughts.

The little man wondered whose face it could be, for some reason he thought that such a man exists in reality. He would also think about the reason of the sudden appearance of such a thing.

Since the narrator was confirmed that the face on the wall exists, he began searching for the face. He would do that all day and night.

Ans: The speaker is the little man.

He wanted to find the man whose face appeared on his wall. Hence, He never felt like looking at women since he was always searching for that one man.

The speaker was looking for the man whose face had appeared on the wall of his room in that old house.

Ans: The speaker was holding the visiting card of the man (Mr Ormond Wall) whose face appeared through the patches of his wall.

The card was important for the speaker because he wanted to know the man’s identity because the man resembled the face on the wall.

The speaker was surprised and taken aback when he saw the card.

9. Which sentences suggest that the little man raised the curiosity of the listeners?

Ans: The following sentences suggest that the little man had raised the curiosity of the listeners:

“‘Most remarkable’, we said, ‘most extraordinary’, and so forth, and we meant it too.”

“Soon the narrator of the amazing experience rose up and said goodnight.”

These lines show how much the listeners were into the story and they loved the way it was narrated by the little man.

10. What did the disappearance of the face from the wall signify?

Ans: The disappearance meant that Mr Ormond Wall was no more and could not survive the motor accident.

11. What were the three most extraordinary things about the story the little man narrated?

Ans: The first extraordinary thing was that a simple patch on the wall can not only look so similar to a real person but also hold a deep significance with his life. Secondly, the name of the gentleman was similar to the name of the street where the old house was located. The third extraordinary thing was that the little man had made up the whole story just half an hour ago then.

12. Do you think the little man was an interesting storyteller? Why/ Why not?

Ans: The little man was indeed an interesting story teller. He had kept everybody engaged in his story the whole time. He managed to keep the suspense although when he had just made up the story some time back.

13. Do you believe in the occurrences of incidences which cannot be supported by science or logic?

Ans: I am sceptical about occurrences of incidents that cannot be supported by science or logic. According to me, it is inappropriate to believe or disregard something completely without experiencing it.

Change the following into negative sentences without changing their meanings:

Identify whether each highlighted phrase is a noun phrase (N), an adjective phrase (A) or an adverb phrase (AV):

Complete these sentences with suitable phrases as directed:

What is the summary of the story of the face on the wall?

The Face on the Wall narrates the experience of a guest who was staying in Great Ormond Street in an old house. During one such stay, he noticed the damp walls had discoloured patches on them. One particular patch resembled a human face. The guest becomes obsessed with the face.

What happened to the face on the wall?

The face on the wall was faint when Mr Ormond had an accident and disappeared when he died. He finished talking and when he was at the door, the people in the room reminded him of the third thing.

What is the theme of the story the face on the wall?

The reason growing up involves facing tough situations is a good theme for the story is because everyone has changed in life and life doesn’t always go the way you want it to go. Children every day have to experience growing up as a part of their life.

What were the three remarkable things about the story of the face on the wall?

What was the surprise element of the story face on the wall?

One particular patch resembled a human’s face. The guest becomes obsessed with the face and inquires to reveal that it was the face of the American Millionaire Ormand wall. The guest recall the face was slightly visible when he woke up the previous morning. By evening, they had disappeared completely.

What happened to the face on the wall when the narrator went back home?

The narrator reached his city and slept at night. But in the morning, he saw that the face on the wall had become dim. The next morning it disappeared from the wall.