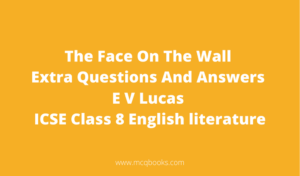 1. What had been the topic of discussion at Dabney’s last evening? What did the little man say when he was asked to narrate his own story?

Ans:- The topic of discussion at Dabney’s last evening was about events that cannot be explained by natural causes.

The little man insisted that whatever he spoke was the truth, unlike the made-up stories that other iterated, he also termed his story as a self-completing ‘occurrence’ which personally happened to him.

2. While staying in great Ormond Street, how was the narrator affected by the face on the wall?

Ans:- The face affected our narrator greatly as his thoughts were filled with it. As days went by and the narrator had the time to recover from his illness, he was affirmative that maybe there was indeed a man alive with the same face, he was sure about it. So, he began searching for him everywhere even though his efforts were useless. The search drove him to insanity, to the point where he neglected everything.

3. How during influenza did the author find changes in the face on the wall?

Ans:- The face on the wall appeared and felt like most of those that take in form on damped and patchy walls. The author didn’t notice anything strange at first but after falling sick due to influenza he did notice sudden and interesting changes. The face on the wall gradually had a stronghold on the narrator as it grew more and more real and remarkable. The face occupied all his thoughts as he took into account the features that the face had.

4. How did the face control the narrator and how was he forced to go for a real search?

Ans:- As the face on the wall became more prominent, the narrator’s hunger for finding the man increased. He began searching for him everywhere; he went to places where large people would gather like in political meetings, football matches, railway stations etc. He went frenzy and neglected everything else. He would search him in hoards of men and never laid an eye on women during that time.

5. How did the narrator search the man and what had been the result?

Ans:- The narrator searched the man in places where many people would gather at once, i.e., football matches, political meetings, railway stations etc. He would alwaysstare at people’s faces in an attempt to find even a small bit of resemblance, this activity however made the crowd think he was some mad person. Needless to say, it drove him crazy as he neglected everything else he had in life until he did found the man in a taxi which was heading somewhere.

6. How did the narrator find the man? On following the man what did he find?

Ans:- The narrator found the man in a taxi which was going east along Piccadilly. He followed the man to Charing Cross station and saw him with ladies and a little girl. After finding out that the mysterious man was heading to France, our narrator decided to tag along. Failing at first, he didn’t lose hope but moved forward only to at last meet the man whose face was on the wall in front of his cabin door.

7. How did the narrator discover the man as a rich person?

Ans:- Upon returning to Great Ormond Street he immediately decided to find the American. He wrote to many American editors and made American friends in London but all he could gather about the man was that he was a millionaire with English parents. That’s how he came to know that he was a rich person.

8. How did the narrator meet the man? What did he ask then?

Ans:- the narrator at first saw the man in a taxi that was going east. He then reached Charing Cross and took the same ship as the man for France after a lot of hassle. Our narrator took his place in front of the man’s cabin door and after finally meeting him all he could ask for was just his card. The man although looked questionably at our narrator, gave him the card and hastily left.

9. What happened to the narrator on reading the card?

Ans:- The narrator felt an immense sense of satisfaction after meeting the one he was searching for everywhere. He placed himself in a corner and read the card just enough to learn the man’s name and the place where he lived before falling unconscious as his head spun, with light leaving his eyes.

10. How did the man react when the narrator asked him for his card?

Ans:- The man was shocked and surprised at our narrator advances but he granted his request; gave him his business card and left hurriedly. The narrator did not doubt that the man must have considered him a mad person, still, he was nice enough to not deject him completely.

11. On returning to Great Ormond Street what else information did the narrator gather about the man?

Ans:- Once the narrator got better, he returned to Great Ormond Street and began his search for the man and about his identity. He knew he was an American so he wrote to many American editors and made friends with Americans in London just to learn about the man. All he learned was that he was a rich millionaire with English parents but he couldn’t find the residence.

12. What change about the face did the narrator gather about the man?

Ans:- The narrator was shocked to see that the face on the wall was only barely visible. Until before it was prominent almost with a voice of its own but the next thing he knew it had just become a ghost of itself. It was confusing and saddening for the narrator since he could sense an ill foreboding from the set of events.

13. What change about the face did the narrator find? How did the newspapers reveal the truth?

Ans:- One day the narrator just found out that the face on the wall had grown faint. It disturbed him a lot because he felt like he was losing something he didn’t even found an answer to. It was frustrating to say the least. However our narrator found out that an American millionaire got into a car accident and that the person’s life was in danger. It was as if the image of the face had some kind of connection with the actual person’s life. So, when the face completely disappeared, the man in question also died.

14. How is the death of the man and the disappearance of the face from the wall seemingly connected?

Ans:- The narrator noticed how the perfectly visible face had turned faint overnight just when the news of an American millionaire’s motor accident made the headlines of the newspaper. He was confused at first but later upon realizing that it is the same person whom he was frantically searching for a while back, he examined the face again. This time though he witnessed it disappearing completely from the wall. The man died as well. This suggests that the life of the said person and his face on the wall are connected.

15. What were the two most remarkable and extraordinary about the narrator’s story?

Ans:- The first most remarkable thing about the narrator’s story was how must the features of an American gentleman had taken a firm form in the carvings of the wall of a house in London. The second most remarkable thing that happened was that both the name of the gentlemen and the place where his features were carved out, the shared similarity in their names, i.e., both had “Ormond” in the names.

16. What had been the third thing that the author mentioned?

Ans:- The third thing that the author mentioned was that he made the whole story up in half an hour which means all of it was just a hoax just to entertain a certain group of people. None of the things that happened to the author was real and was just a part of his story to surprise people who were listening to his story.

Ans:- The story “Theface on the wall” had a very fun touch to it because it had a good balance of having the shock factor with an expected end. It had managed to rapt the attention of its readers with its perfect pacing. Events described in the story were spooky and funny as we witness a man losing it all for finding a man he doesn’t know at all. The way the narrator revealed that all he said up until then was a story that he made up half an hour ago despite insisting that it was true occurrence was funny because it left everyone in an utter state of confusion. Thus, we can conclude that climax was as good as the build-up of the story, very O Henry-ish.

18. Evaluate the story to be catering to supernatural elements.

Ans:- The events elaborated in the story were pretty interesting. The way the life of the American had some kind of spooky connection with the carvings in the wall that had taken shape with features of the said man, also how the place of our narrator’s residence shared the same name as the mysterious person were supernatural, to say the least. Interestingly we also found out that the face did disappear from the wall once the person was dead, which means the vitality of the human life can be expressed based on the clarity of the carvings. All in all, even though it was a made-up story, it scored some good points for its supernatural element.

19. Evaluate the storytelling skill of the narrator.

Ans:- The narrator showcased his impressive storytelling skill while narrating the story to the people around him, his influence even reached the readers as he managed to capture everybody’s attention. The way he crafted a thrilling story that served the purpose and aim of that night’s topic of discussion was truly remarkable. His story, even though a hoax, had some creepy sense of reality to it which made it even more appealing. Even when he ultimately revealed that his story was false one with satisfaction, it managed to catch all of us off guard though expected.