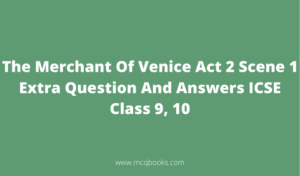 1 . Where does this scene takes place? Who is present in this scene? On what basis does Morocco says Portia not to dislike him?

Morocco pleads to Portia not to judge him because of his dark complexion and by not considering the external features, he says Portia to judge him on the basis of his bravery.

2 . What explanation does the Prince give for his dark complexion?

3 . What challenges did he throw in front of Portia?

_ The Prince of Morocco says to bring him the most handsome and fairest creature from the north where the rays of sun hardly reach to melt the long pointed spikes of ice. Then both of them will make an incision to prove their love for Portia and to check whose blood is more reddish.

4 . What was the old belief regarding the colour of blood?

_ Earlier it was believed that the most courageous man would have the reddest blood while a coward will have pale-coloured blood. This was the reason why Morocco wanted to make incisions to check the colour of the blood and prove who was braver.

5 . How did Morocco appreciated himself? And under what circumstances he was ready to change himself?

_ Morocco says that although his dark complexion has scared the valiant by his love, the best-regarded maidens have loved it too. The Prince of Morocco would never change his complexion. He would do it only to win the affections of Portia and to steal Portia’s heart.

6 . What light does it throws on the Prince’s character?

_ The Prince of Morocco was very confident about his bravery and openly threw challenges to bring him the fairest and most handsome creature from the south pole, and both of them will make an incision to check whose blood is darker. But, somewhere he was insecure about his dark complexion as he begins his speech by saying, “ Mislike me not for my complexion.” However, at the end of his speech, we see that he was proud of his worth, his complexion which he would change only if Portia wants him to do.

7 . What is the lottery of Portia’s destiny? How does it prevent her from the right of voluntary choosing?

The lottery of Portia’s destiny was the lottery of a casket according to which, the one who chooses the right casket would marry Portia.

8 . What did Portia said to Morocco?

9 . Does Portia meant the last three lines of the extract?

_ Portia said that the Prince of Morocco had a fair chance as compared to the other suitors. But later on, we see that Portia says, that she was fortunate enough to see the Moroccan Prince fail at the lottery of casket. She did not like any of the suitors and wanted all of them to lose.

10 . Give a character sketch of Portia.

_ Portia was of a calm and composed behavior as she was extremely tired of the suitors who have come to visit her yet, she behaved in a courteous and respectful manner with the Moroccan Prince. She confidently holds her composure. Moreover, Portia was an obedient daughter as she would choose the one who wins the lottery of the casket as devised by her father. Portia was also witty which was well understood by her remarks that the noble Prince had a fair chance to win her.

11 . What is meant by scimitar? What did the Moroccan Prince do with that?

_ Scimitar is meant by the short, curved sword which the Moroccan Prince had with him. With the scimitar, he defeated the Sophy ( the Emperor of Persia) and a Persian Prince who had won three battles against the Sultan Solyman.

12 . What were the brave deeds of Morocco which he was ready to do to win Portia?

_ The Prince of Morocco was ready to do anything to win Portia. He would look defiantly into the eyes that were very bold and would also defy the most daring heart on earth. To win Portia, he would pluck the sucking cubs from the mother bear and mock the lion when he roars for prey.

13 . Which thing did Morocco feared the most?

_ The Prince of Morocco acted the bravest man on earth but the thing which he feared the most was fortune. As the lottery of the casket was dependent on the fortune he feared that the least eligible one could choose the correct casket and win Portia. Fortune may be in favor of anyone no matter how strong or how worthy the person is, and that’s why the Prince of Morocco feared “fortune” the most.

14 . Who are Hercules and Lichas? Why are they referred to in this context?

_ According to Greek mythology, Hercules was the strongest and the bravest hero. Lichas was his servant. They are referred to in this context to convey that fortune can be favourable to any person without considering his bravery, or looks, or worth. Once, Hercules and Lichas were playing a game of dice to prove who was a better man and by chance, the winning throw came from the hand of Lichas, and Hercules being the strongest and bravest was defeated in the game of dice and hence proved the fortune can be favourable to anyone.

15 . How did Moroccan Prince-related himself with Hercules?

_ Moroccan Prince considered himself as the bravest and strongest man who could do anything to win Portia. But he feared his fortune which may not be in his favour and any least eligible person would win the lottery of casket if fortune favoured him. It was quite relatable to the story of Hercules and Lichas where Hercules, as they lost the game of dice as fortune was not in his favour and Lichas being his servant was fortunate enough and won the game of dice.

16 . What instruction did Portia give to the Prince before making his choice?

_ Portia said the Prince should either take chance to choose the casket or not make any attempt to choose at all. And before choosing the correct casket, he needs to take an oath that if he loses in the lottery of casket then he wouldn’t marry any other lady later in his life.

17 . What Portia said about Morocco before making his choice? How well did Portia tackle the Moroccan Prince?

Portia said to Morocco that after completion of dinner he first needs to go to the temple and take an oath before performing in the lottery of the casket and wishes him good fortune.

Portia’s tack in handling the Moroccan Prince is commendable. Portia dislikes Morocco still she behaved in a peaceful and respectful manner. Portia disliked his pride and boastful attitude but she didn’t depict it in her speech or manners.

18 . What new thing does this scene reveals about the lottery of casket?