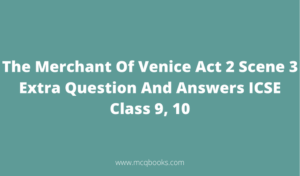 1 . Where does this scene takes place? To whom are we introduced in this scene?

According to Launcelot, Shylock was very cruel and very rude as an owner and as a human as well. Launcelot felt very deprived and did not feel free to do anything. Moreover, according to him, he did not get enough food and clothing. Shylock thought that everyone would deceive him including Launcelot, which Launcelot hated the most. Lastly, as Launcelot was a Christian he feared that continuing his work under Shylock would turn him into a Jew.

3 . What is the evidence that Jessica liked Launcelot’s presence in her house?

On hearing the news that Launcelot was leaving their house she felt really unhappy and turned sorrowful. Launcelot’s cheerful nature always cheered Jessica. Jessica considered him as a merry devil in their house which was nothing less than a hell. Launcelot’s joyful nature reduced the boredom from their house and his lively spirits made it a little less miserable. These words are evidence that Jessica liked Launcelot’s presence in their house.

4 . What light does the description of Jessica throw on Launcelot’s character?

According to Jessica’s description, it is well understood that Launcelot is an amusing fun-loving person. He has the quality to enlighten the dull atmosphere by his ceaseless talking. Jessica considers him as a “merry devil” in their house which was nothing less than a hell. He has a good sense of humour and is fond of practical jokes and nonsensible utterances. Launcelot is cheerful which reduced the boredom of Jessica’s miserable house.

5 . What task does Jessica give to Launcelot and what was the strict precaution given by her to Launcelot?

Before the departure of Launcelot Portia gives him a ducat and also assigns a task to him. She hands over a letter to him which he was supposed to give to Lorenzo at the dinner.

Jessica instructed Launcelot that he should do the task very secretly and no one should get any hint about the task assigned to him. At the dinner, he would secretly deliver the letter to Lorenzo.

7 . What do you mean when Launcelot said “ Adieu! Tears exhibit my tongue”? In what context does he say the above-quoted line?

When Launcelot said the above-quoted line he was very emotional and sad that his emotions prevented him from speaking anything. He said that above-quoted line while bidding farewell to Jessica as he was freeing himself from the service of the Jew that is Shylock and was about to start a new service under Bassanio who was a Christian.

8 . What does Launcelot mean by the extract, “if a Christian does not play the knave and get thee, I am much deceived.”?

9 . What kind of bond do Jessica and Launcelot share?

Launcelot was the servant of Shylock. But Jessica never considered Launcelot as a servant. They shared a very close bond of friendship which is evident by the truth that only Launcelot knew about the love story and mischievous deed which Lorenzo and Jessica were about to do. Jessica also trusted Launcelot blindly as she handed over a very secret letter to Launcelot which is to be delivered to her lover, Lorenzo. Their close bond was also evident when Launcelot was bidding farewell to Jessica. Both of them had tears in their eyes. They were both emotional, sad and depressed. These little things well portrayed their strong and close bond of friendship.

10 . What is the “heinous sin” referred to by Jessica? Why is it considered a sin?

The “heinous sin” referred to by Jessica is that she was ashamed to be the daughter of his father. She considers it as a sin as no daughter feels ashamed of their father and every child loves and trust their father blindly but in her case, it was the opposite.

11 . Why does Jessica feel ashamed to be the daughter of her father?

Shylock was a narrow-minded person who always imposed restrictions on Jessica. He was so indulged in his business that he couldn’t give Jessica the fatherly life which she needed since her childhood. Shylock was such a miserly tyrant that Jessica wants to run away from him. Jessica was also ashamed of her father’s money lending business as he imposed a high amount of interest on the person who borrowed money from him. Lastly, Shylock hated Christian but Jessica had immensely fell in love with a Christian and this was the main reason why Jessica felt ashamed to be the daughter of her father.

12 . Being the daughter of Shylock did Jessica had the same manner as Shylock?

Being the daughter of Shylock, Jessica did not have the same manner as Shylock. She was humble to all. Also, she was beautiful, intelligent and was down to earth. She had no greed for money or any other materialistic things like her father Shylock. Jessica had no hatred towards any religion. She loved the one who was a Christian and her love for him was eternal and unconditional. These were the sharp contrast between the character of Shylock and Jessica.

13 . Who is Lorenzo? What promise did he give to Jessica? Describe the strife that Jessica is going to end?

Lorenzo is the one whom Jessica loves unconditionally, and for whom he was ready to leave her father.

Lorenzo was a Christian and Shylock hated Christians. So, he would never allow Jessica to marry him. But Lorenzo and Jessica loved each other desperately and hence Lorenzo promised him to marry her by hook or by crook. As a result, they decided to elope.

Jessica was going to end the strife between being loyal to her father and her love for Lorenzo. She was going to become a Christian and Lorenzo’s loving wife after marrying her.

14 . What was the relationship between Jessica and her father Shylock?

Shylock and Jessica’s relationship was not a normal father-daughter relationship. Jessica hated her father and was ashamed of her father. Shylock did not give her the fatherly love which Jessica required and he was narrow-minded. He always imposed restrictions on her and did not show any concern towards her. He always cared about his money and his business. Jessica and Shylock shared a bitter relationship.

15 . What character sketch of Jessica did you get in this scene?

Jessica is the only daughter of Shylock who is beautiful, intelligent and has an impulsive nature, but she is ashamed of being his daughter. She finds the atmosphere of her house suffocating. She hated the nature of her father’s miserliness and tyrannical nature. Also, she knew that her father’s hatred for Christians but still she fell in love with Lorenzo who was a Christian and was planning to elope with him. This showed that she was not a loyal and obedient daughter.

She seems to be quite heartless and unfaithful not only to her father but also to her religion. Jessica is torn by a conflict between her obligation to her father and her desire to marry Lorenzo. She is well aware that it was considered a sin of being ashamed of her father but still she decides to leave him and marry Lorenzo. This showed that she was true and a dedicated lover.

16. What is the sharp contrast between Jessica and Portia’s character?

The sharp contrast between Portia and Jessica’s character is well portrayed in this scene. Their loyalties to their father are highlighted in this scene. Portia proved to be a loyal and obedient daughter even after her father’s death. She obeyed her father’s will regarding her marriage and after being completely tired of the lottery of casket she did not give up. On the other hand, Jessica knew that her father Shylock was against Christianity yet she was ready to leave her father and marry Lorenzo who was a Christian. Both Portia and Jessica were someone’s daughter but their loyalty and obedience towards their father’s will made them of contrasting characters.

17 . Why is the main reason that Jessica disobeyed her father?

Jessica disobeyed her father but she cannot be blamed for her ingratitude. Shylock has been unsuccessful in giving her the fatherly love and affection which she needed. His oppression, narrow-mindedness, strict restrictions and suspicious nature alienate Jessica from him. She strongly felt that marrying Lorenzo will make her feel free from her father’s bindings and she will stay happy and will lead a life which she always wanted.

18 . What do we get to know about Shylock even if he was not present in this scene?

In this scene, although Shylock was not present he plays the role of villain. His insensitive and tyrannical attitude is revealed in this scene through his daughter. Jessica says that she felt suffocated in her own house due to the restriction, oppression and narrow mindedness of Shylock. She considers her house as hell. Shylock’s miserliness, his hostility towards the pleasures of life and his passion for money have made his house like a hell. This has detached him from everyone including her daughter Jessica.

Next , according to Lorenzo he was very rude and cruel as an owner and as a human as a whole. Shylock only had an obsession for his money and thought everyone would deceive him including Lorenzo and Jessica.