Textbook Questions And Answers Of The Passing Away of Bapu by 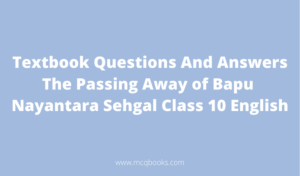 1. Choose the correct alternative to complete the following sentences :

a)Gandhiji had been shot on his way to

i) the Birla House

b) The author came to know about Gandhiji’s death by

c) When one is faced with the shock of a loved one’s death, one

2. Fill in the chart with information from the text:

a)date on which Gandhiji was shot dead
30th January 1948

b) place where Gandhiji breathed his last
Birla House

c) information given by the broadcast
Bapu was no more

3. State whether the following sentences are true or false. Provide sentences/phrases/words in support of your answer :

a)The author received an urgent telephone call in the morning

Supporting statement : “I was having tea at the evening of 30th January…”

b)People attempted to break into the Birla House.

Supporting statement :”They jostled one another in a stampede to break into the house “.

c) The news of Gandhiji’s death didn’t shock the people.

Shocking statement :”It was the question in many of our hearts as we sat, still shocked and unbelievable. “

4. choose the correct alternative to complete the following sentences :

a) Gandhiji’s funeral was to take place

i) on the day of his death

ii) two days after his death

iii) one day after his death

iv) a week after his death

b) Padmasi was Mrs. Naidu’s

c) While walking,Bapu used to carry in his hand a/an

5.Complete the following sentences with information from the text :

a)It was impossible to move.

b) Padmasi declared that they would walk with Gandhiji in the funeral procession.

–the author was among people for whom walking with Bapu had a special meaning.

c) To walk was often the only way open to the average Indian.

–to walk is to make slow progress.

7. Choose the correct alternative to complete the following sentences :

a)Gandhiji’s ashes were taken to

b) A huge crowd had gathered by the

8. Complete the following sentences with information from the text :

a)People on the special train sang bhajans while going to Allahabad to immerse the last ashes of Gandhiji.

b) The author felt that she had grown up within a magical circle and with Bapu’s sudden demise that circle had vanished.

c) Bapu had passed away but his India would continue to live in his children.

9. Fill in the chart with information from the text :

a) cause: they could feel Gandhiji’s presence amid the flowers and songs

Effect: people did not weep anymore.

b) cause: the magic circle vanished.

c) cause: the author’s values were not so week.

Effect: The author felt that she wouldn’t lose courage so easily.

10. Join the following pairs of sentences into single sentences as directed :

a)I saw a snake. I ran away. (use participle)

–Seeing a snake, I ran away.

b) He learns music. He listens to the chords. (use preposition with gerund)

–He learns music by listening to the chords.

c) Gold is a precious metal. It is used to make ornaments. (use noun in apposition)

–Gold, a precious metal, is used to make ornaments.

d) Ramu has some money. He can buy books. (use infinitive)

–Ramu has some money to buy books.

e) The sky was cloudy. We postponed our journey. (use nominative absolute)

–Being cloudy the sky, we postponed our journey.

f) The boy wrote the answer . The answer was incorrect. (use adverbial phrase)

–The boy wrote the answer which was incorrect.

11.Join the following pairs of sentences into single compound sentences as directed:

a)The old man is unwell. He cannot go out. (use illative conjunction)

–The old man is unwell so he cannot go out.

b) He is honest. He is humble. (use cumulative conjunction)

–He is honest as well as humble.

–Sonali cannot write poetry yet she keeps on trying.

d) Study hard. You will not pass the examination. (use alternative conjunction)

–Study hard or else you will not pass the examination.

12.Join the following pairs of sentences into single complex sentences as directed :

a) Rabindranath Tagore is a famous poet. He won the Nobel Prize. (use adjective clause)

–Rabindranath Tagore won the Nobel Prize,who is a famous poet.

b) He returned home. Everyone in the family had fallen asleep. (use adverb clause)

–Everyone in the family had fallen asleep when he returned home.

c) The sun rises in the east. Everyone knows it(use noun clause)

–Everyone knows that the sun rises in the east.

13.Join the following sentences into single sentences as directed :

a)It rained hard. The roads were not flooded(compound sentence)

–It rained hard but the roads were not flooded.

b) He completed his work. He took rest. (simple sentence)

–After completing his work ,he took rest.

c) Rahul is a great singer. He can sing different kinds of songs. (complex sentence)

–Being a great singer, Rahul can sing different kinds of songs.

d) The time of departure of the train has changed. Alia knew it. (complex sentence)

–Alia knew about the time of departure of the train which has changed.

e) I do not watch television, I do not listen to the radio. (compound sentence)

— I do not watch television nor listen to the radio.

f) The child was short. The child couldn’t pick the guava from the tree. (simple sentence)

–Being short the child couldn’t pick the guava from the tree.

14. Split the following into two sentences :

a) It rained and i couldn’t leave my room.

— It was raining. I couldn’t leave my room.

b) He thought that he could win the race.

–He could win the race. He thought.

c) Having been informed of the trouble,the principal left for home.

–The principal was informed about the trouble. He left for home .

d) Nazir,who was the captain of the team, scored a century.

–Nazir was the captain of the team. He scored a century .

15. Write a biography of Maulana Abul Kalam Azad (within 100words) based on the hints given below:

Maulana Abul Kalam Azad was a great national hero and played a crucial role in the freedom struggle of India. He was born on November 11, 1888, in Mecca, Saudi Arabia. He was also a poet and composed poetry in the Urdu language. Kalam the great patriot also worked as a journalist and protested against British Raj. He was an enthusiastic supporter of Gandhiji’s ideas and he joined the National Congress holding Gandhiji’s hand. He wrote many books and among those, there were famous ones’ like ‘India wins freedom’, ‘Ghubar-e-khatir’. He was also credited with the establishment of the Indian Institutes of Technology and the foundation of the University Grants Commission, an important institution to supervise and advance the higher education in the nation. In India, his birthday is celebrated as National Education Day. This great leader took his last breath on the 22nd of February, 1958

16. Use the following flow-chart to write a paragraph(within 100 words) on how a building is constructed:

drawing of a plan of the building by the architect- getting the plan sanctioned by the corporation or municipal authorities- engaging masons and laborers- starting the construction with bricks, cement and sand- fitting doors and windows- plastering of walls-wiring-electric and water connections- painting-building completed-fit living.

How a building is constructed

Constructing a building is the reason we all are surviving. Every building goes under a lengthy and intellectual process. Many things are required to build a building. Firstly, the architectures need to draw a plan for the building. And the plan gets sanctioned by the corporation or municipal authorities. After the sanctioning, labourers and masons are engaged. They start the construction with bricks, cement and sand fitting doors and windows. After that comes, plastering of walls and wiring for electric appliances. Also, the connection is made for water. The last step is the painting each and every corner of the building. After all these things the building becomes complete and fit for living.