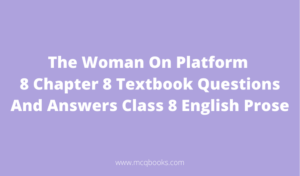 Ruskin Bond (born 19 May 1934) is an Indian author of British descent. He lives with his adopted family in Landour, Mussoorie, India. The Indian Council for Child Education has recognised his role in the growth of children’s literature in India. He was awarded the Sahitya Academy Award in 1992 for Our Trees Still Grow in Dehra, his novel in English. He was awarded the Padma Shri in 1999 and the Padma Bhushan in 2014.

The Woman on Platform 8 by Ruskin Bond is a story about love and affection that transcends all barriers of kinship. It is narrated in the first person by a schoolboy named Arun. All the events are seen from his point of view.

The story revolves around Arun’s encounter with a stranger – a mysterious woman. The woman in a white saree treats him like a son. She offers him tea and samosa . She helps him feel comfortable. Her dignity and humanity come in sharp contrast with the vanity and arrogance of Satish’s mother. Arun’s calling her ‘mother’ at the time of parting is a sweet gesture of recognition of a loving relationship. As a matter of fact, there is no Platform 8 on the Ambala station.

Answer the following in two or three sentences each:

1. Arun was waiting on platform 8 at Ambala station for the Northbound train to go to the boarding school. He was alone because his parents thought he was old enough to travel alone.

2. When the train arrives people rush like a wild crowd to board the train.

3. When Arun heard the voice he looked up at the woman who was standing near him. She was draped in a white saree and was very simple.

4. Arun and the stranger talked very closely. The stranger was dignified and her approach was affectionate and caring that Arun started liking the lady and answered all the questions about him. .

7. Satish and Arun were not happy at the suggestion Satish’s mother gave. Arun instinctively replied that he liked strangers. Satish stood behind his mother grinning at Arun, taking delight in the clash between Arun and his mother.

8. Satish mother gave a bag of fruits and a big box of chocolates a cricket bat and told Satish to share food with Arun. She advised Satish not to put his head out of the window’, not to eat rubbish on the way.

9. Satish’s mother thought that Arun’s mother was not a very capable person because she would have observed the lady speak very little. She did not bring any eatables and did not give any advice to Arun.

10. Arun was very much impressed by the way the lady cared for him. He planted a kiss on the lady’s cheek, shook hand with her and said, goodbye mother.

II. Read the extracts and answer the questions that follow:

ii. It means that the dignified approach of the lady towards Arun made him feel very comfortable.

2. i. The stranger lady clad in a white sari.

ii. The lady did not want Arun to feel embarrassed as his parents had not came to wish him bye.

ii. Because she seemed to be very suspicious and over cautioned about others.

IV. Work in pairs and complete the table:

ii. The lady in white sari

iii. It is such a nuisance having to wait for the train right in the middle of the night

iv. The lady in white sari.

vi. Always listen to what your mother tells you

viii. Kissed the cheeks of the lady

Your teacher will read out some words which describe the two women. Listen and write the words under appropriate columns:

The class is divided into four groups. Each group will be given a question. Discuss the question in the group and present it in front of the class:

1. Arun was allowed to travel alone as his parents thought that he was old enough to travel and they wanted him to be self-dependent.

2. The lady had watched Arun sitting alone on the platform at that night, She felt worried for him. She sensed that he would be bored waiting alone. As she was a good-natured woman she would have helped him by talking to him.

3. The stranger mother’ was in white saree maybe because she was a widow, she may be a nun or she loved simple dressing and would have worn white. If we happen to see a person in white during the night we may get scared and would think it to be an evil spirit.

4. I would have ended the storytelling that after the stranger in white saree helped the boy gave him company and see him board the train the ghost disappeared.

1. Now tired of this game and of ambling about the platform, I sat down on my suitcase and gazed dismally across the railway tracks.

2. She drew me out very well, and I had soon forgotten that we were strangers.

3. Satish was standing behind his mother, grinning at me, delighting in my clash with his mother.

4. I looked straight into the eyes of the woman who held my hand, and she smiled in a gentle understanding way.

5. I had already forgiven her for lying; and besides, I had taken an instinctive dislike to Satish’s mother.

6. She told a coolie to look after my suitcase, and then she led me away down the platform.

8. She stood there on the busy platform; a pale sweet woman in white, and I watched her until she was lost in the milling crowd.

9. She allowed me to share the benefit of her advice, as she probably didn’t think my “mother” a very capable person.

10. We placed ourselves at the open windows, and the two women stood outside on the platform talking up to us.

VII. We use reporting verbs that summarise what was communicated while we change the speech. Some of the verbs which are commonly used are: warn, ask, answer, promise, sympathize, refuse, regret, explain, request, blame, advise, apologize, order, greet, suggest, invite, encourage, say, congratulate, declare, announce, instruct, etc. Write appropriate statements as a response to the questions with the help of the examples and clues given below:

Advice: She advised you to wash your hands before eating.’

regret: The student regretted that he had not committed the mistake

invite: The girl invited you to her house

warm: The mother warmed them not too out of the house at bight

enquire: The stranger enquired where my house was

request: The girl requested me to lend my book to her.

exclaim: The boy exclaimed that he was undone.

IX Read the conversation and complete the following:

1. Ramani: Our new servant has a tendency to steal things.

Somu: Is anything missing?

Ramani: Yes, he has stolen one of our blankets.

Ramani: It’s the one we took from Hotel Palm Beach.

i) Ramani told Somu that their new servant had a tendency to steal things.

ii) Somu asked Ramani if anything was missing.

iii) Ramani answered that he had stolen one of their blankets.

iv) Somu further asked her which one and Ramani replied that it was the one they took from Hotel Palm Beach.

2. Child: I want a balloon, which I can release into the air.

Balloon Man: Which colour balloon do you want?

Child: Which colour balloon will take me up with it?

Balloon Man It is not the colour of the balloon, it is what is inside that makes it go up.

i) he wanted a ballon which he can release into the air.

ii) which colour balloon did he want.

iii) which colour balloon would take him up with that

iv) it was what was inside that made it go up

3. Father: Why were you late from school yesterday?

Ashwin: There was a friendly football match between our school and G.K. Public School.

Father: Why didn’t you inform us earlier?

Ashwin: I rang home but nobody picked up the phone.

i) Why was he late from school the previous day.

ii) There was a friendly football match between their school.

iii) Why he did not inform them earlier.

iv) he rang up home but nobody picked up the phone.

4. Man: You are becoming very lazy these days. Didn’t I ask you to get my breakfast ready by 8 O’clock?

Servant: I’m sorry sir. I got up very late today. That’s why I couldn’t make it on time.

Man: Didn’t you set the alarm before going to sleep?

Servant: Yes, I did sir.

Man: Then, what happened?

Servant: I forgot to wind the clock.

i) he was becoming very lazy those days.

ii) hadn’t he asked him to get his breakfast ready by 8 ‘o’clock?

iii) he had got up late that day and couldn’t make it on time.

iv) had not he set the alarm before going to sleep.

v) he had forgotten to wind the clock.

5. Employer: Why did you leave your earlier job?

Applicant: That didn’t meet my requirements.

Employer: What salary do you expect here?

An applicant went for an interview in an office. The employer asked him why he had left his earlier job.

i) the previous job didn’t meet his requirements.

ii) What salary he expected there.

iii) That he was expecting Rs 5000 per month

Salesman: What type of cap do you want, sir?

Customer: One that covers the face.

Salesman: It won’t be a cap then, it would be a mask.

i) requested him to show a good cap.

ii) What type of cap did he want.

iii) Replied that he wanted the one that covers his face.

iv) told him that what he wanted was a mask, not a cap.

After Arun reaches his boarding school, he writes a diary entry about his strange encounter with the woman at platform 8 from 5-00 P.M. in the evening to 12-00 midnight. Imagine you are Arun and write the diary page on his behalf in the table given below.

5-00 pm to 7-00 pm Arrived at the station early, paced up and down the railway platform fed broken biscuits to stray dogs. Tired- sat down on my suitcase.

7-00 pm to 9-00 pm Met a strange woman in white saree. She looked kind and gentle. Invited me to have tea and sweets.

9-00 pm to 11-00 pm The strange woman in white talked to me about everything about myself. Met Satish, my school-mate.

11-00 pm to 12-00 pm Satish’s mother /warned me not to talk to strangers. Train arrived at 11:30 pm Boarded the train. Said goodbye to the strange women in white. Kissed her on her cheeks.

I. Rewrite the following sentences in the reported speech:

i) He said that Amuda had been dancing.

ii) My servant says that tea is ready.

iii) He explained that he never ate meat.

iv) He said that he had found a flat.

v) She said that they would discuss the matter the next day.