The No Men Are Foreign Extra Questions And Answers in English, Karnataka Board Class 8 makes it easier to understand the story. Understanding every detail of a story is important for scoring higher on an exam and expert writers have made sure that you know how everything flows together by summarizing perfectly! 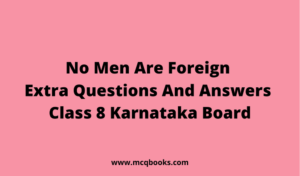 Question 1. What does a peaceful harvest refer to?

Peaceful harvest refers to peacetime and the prosperity one has in times of peace.

Question 2. In what way is starvation associated with winter?

Wintertime is associated with cessation of activity and end of productivity. The time of war is as bleak as the time of winter. Life comes to a standstill and people die of starvation at the time of war

Question 3. What are the hells of fire and dust? What do they destroy?

Hells of fire and dust are the fire, smoke and dust from bombs and gunfire. They pollute the air which was given by God to all in pristine purity. The poet reminds us that we have no right to spoil what is commonly owned by all children of God.

Question 4. What is the innocence of air? How is it defiled?

Question 5. What does the poet emphasise by beginning and ending the poem with the same line?

When a word, phrase, clause or sentence is repeated, the repetition is for the emphasis. The poet intends to drive home the truth that thinking of people of foreign countries as strangers is an unnecessary man-made barrier that should be broken.

Question 6. What does the poet mean by ‘they, too, are aware of the sun, air and water? What is the significance of the word ‘too’ here?

Question 7. War is the enemy of our environment. How?

When we fight a war and use dreadful weapons against others, we pollute our environment with the dust and the smoke of the guns.

Question 8. Why does Kirkup think that ‘no men are strange………… Beneath all uniforms’?

Uniforms are military uniforms that distinguish soldiers of one country from those of another. In the time of war, uniforms are necessary so that enemy soldiers can be killed. But, the poet’s concern is to show that the uniform stands for superficial differences and beneath the uniform all men are the same. They are all creations of God, breathing alike.

Question 9. What happens when war breaks out?

When we wage war and use dreadful weapons against, others, we defile our earth. The dust and smoke of guns pollute the very air we breathe.

Question 10. What commonalities of life can be found everywhere? OR What are the commonalities Kirkup highlights to prove that all human beings are one?

The commonalities of life that can be found everywhere are – beneath the different clothes that people wear they possess the same body, people live and die on the same earth, people living in different lands get the same sunlight, breathe the same air and drink the same water, people have the same hands that are destined to work hard, and all people have eyes that wake or sleep.

Question 11. What are the evils of war, according to the poet?

The poet advises people to shun hatred and warfare. The poet says that during peace, people enjoy the harvests and prosper, whereas during the war people experience distress and scarcity of food. He further says that when we hate others, we rob, deceive and condemn ourselves. When we fight against others we defile the purity of our earth. The fire and smoke from the weapons of war poison the air which we all breathe and is essential for our existence.

C3. Name the figure of speech in these lines:

Fed by peaceful harvests. War’s long winter starved. Our hells of fire and dust. Outrage the innocence of air.

Four alternatives are given for each of the following questions/incomplete statements. Choose the most appropriate one.

Question 1. The poem ‘No Men are Foreign’ is written by

Question 2. The people who are referred to as brothers are

Question 3. Hells of fire and dust refer to

A) destruction of hell
B) fire, smoke and dust from bombs and gunfire
C) the burning down of hell
D) war that takes place in hell.

B) fire, smoke and dust from bombs and gunfire

Question 4. The hells of fire and dust destroy the

Question 5. The force that can win over others’ strength is

Question 6. The example that the poet gives to prove that life is common everywhere is

Question 7. If we take up arms against each other

D) we defile the earth

A) winters become longer due to war
B) there is no harvest
C) everything is in short supply due to war
D) war delays the coming of spring.

C) everything is in short supply due to war