For A Five Year Old Poem Analysis Class 8 Karnataka Board

English is a difficult subject for many people to learn. Some students may become frustrated and give up, but here’s For A Five Year Old Poem Analysis Class 8 Karnataka Board to help you maintain your momentum! This For A Five Year Old Poem Analysis will provide all necessary information needed in order to study KSEEB Class 8 English successfully at home or school; it includes detailed grammar rules with examples that were used during today’s class discussion on Karnataka Board Exam English.

The For A Five Year Old Poem Analysis, Karnataka Board Class 8 makes it easier to understand the story. Understanding every detail of a story is important for scoring higher on an exam and expert writers have made sure that you know how everything flows together by summarizing perfectly! 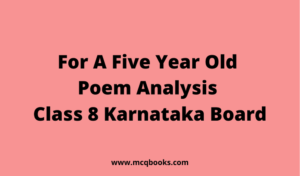 “Practise what you preach” is an old saying. The poet, in this poem, brings out the contradictions in our behaviour. A mother is a speaker in the poem. She narrates an incident and points out the big difference between what we preach and what we practise.

A child sees a snail climbing up the windowsill into his room. It calls its mother to see it. The mother tells the child that it is unsafe for the snail to be left like that.

It might crawl to the floor and might get crushed under one foot. The child understands. It picks up the snail gently, carries it outside carefully and leaves it near a daffodil plant so that it could feed on a daffodil flower.

The mother is happy that still, the belief that gentleness and good character are learnt by words of advice prevails. Children develop such good qualities by listening to what parent and other elders say.

At the same time, she feels guilty. She has advised her child to be kind and compassionate towards the snail, but she had killed mice, wild birds, kittens and so on.

She had not treated her relatives properly. Also, she had conveyed the harshest kind of truth to many others, without bothering how it would affect them. She had not practised what she wanted her child to learn.

She consoles herself at the end. And, she is practical-minded and knows that is how things are happening around her. People say one thing and do exactly the opposite. It reminds us of another saying “Do as I say, but don’t do as I do”. The mother consoles herself saying that she and her child are kind to snails.

Fleur Adcock was born in New Zealand in 1934. Later on, she migrated to England and became a British citizen. She worked as a librarian in London. Her poems mainly deal with the everyday experiences of a woman as a wife and a mother.

This poem is a satire against the belief that we can mould our children rather by our words than by imitation of what we do.

Practice what u preach is the main theme if the poem. One should not be deceptive while preaching to others and must follow what they preach to others.

The first stanza has a child-like innocence and curiosity for the snail that meanders in the room.

The mother also begins with a compassionate and nurturing tone but switched to a disenchanted one. The listing style in the middle of the second stanza is almost rushing or skimming over the shady parts of the mother’s life, almost like she’s hiding something or is ashamed. Then, the poem returns to the innocence of the snail which is hypocritical.

What is the poem for a five year old about?

The Poem ‘Five year old’ is written by Fleur Adcock. The poem narrates the realities of life. The poet shows the cunningness of some elders by providing a conversation between the mother and a five year old boy. A snail entered into a room where the mother and son were sitting and reading a book.

What does the mother tell the child in the poem for a five year old?

The Mother tells her child to carry the snail carefully, outside, and leave to feed on daffodils.

Who is the speaker in the poem for a five year old?

The poet Fleur Adcock and her child.