Question 6.
Which of the following statements is incorrect regarding the Partition of India?
(a) People were rendered homeless.
(b) People lost all of their immovable and movable assets.
(c) Boundary dispute was the main issue of this Partition.
(d) Women were mistreated.

Question 7.
Which of the following is not one of the advantages of oral history?
(a) It broadens the scope of history.
(b) It is in chronological order.
(c) It provides information other than the government policy and official records.
(d) It explores the experiences of the ignored people.

Question 11.
When were the separate electorates granted to the Muslims by the colonial government?

Question 12.
What words have been used by the people and survivors for partition?

Question 15.
Look at the image and describe it. 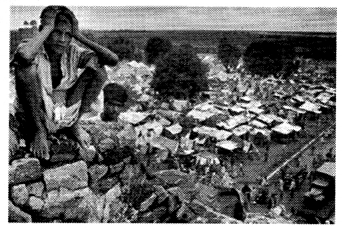 Question 16.
Look at the image and describe it. 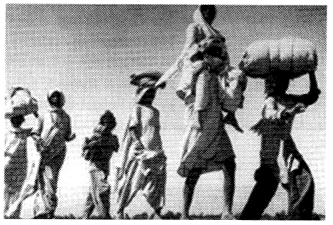 Question 17.
Indicate which of the following statements is NOT correct.
(a) The Cabinet Mission recommended a loose three-tier confederation.
(b) In 1939, elections to the provincial legislatures were held for the first time.
(c) The Unionist Party represented the interests of landholders-Hindu, Muslim and Sikh in Punjab.
(d) On the 16th of August, 1946, the Muslim League called for a “Direct Action Day”.

Question 19.
Read the information given below:

Identify and name the doctor who helped people during the partition.

Question 21.
Consider the following statements regarding the events of the National Movement.
(i) Oral testimonies serve as a better source of information than the official documents regarding the political aspects.
(ii) Oral history has a wider scope to acquaint us with any historic or general event.
(iii) Oral history gives wider access to the experiences of the people who have been considered as the common masses in history.
Which of the following statement (s) is/are correct?
(a) I and II
(b) II and III
(c) I and III
(d) II only

We hope you found this CBSE Class 12 History Understanding Partition MCQs Multiple Choice Questions with Answers helpful. If you have any questions about NCERT MCQ Questions for Class 12 History Chapter 14 Understanding Partition: Politics, Memories, Experiences with Answers Pdf free download, please share them in the comment box below and we will get back to you at the earliest possible time.