Question 1.
Which of the following statements regarding Mahatma Gandhi is/are correct?
(i) He attended the Second Round Table Conference.
(ii) He opposed the demand for separate electorates for lower castes.
(iii) He returned to India in 1917 after two decades.
(iv) He acknowledged Lala Lajpat Rai as his political mentor.
Choose the correct option.
(a) Only ii
(b) ii and iv
(c) iii and iv
(d) i and ii

Question 3.
A series of ‘Praja Mandals’ was established to promote nationalist creed in
(a) Middle classes
(b) Princely states
(c) Merchant community
(d) All of the above

Question 5.
Which of the following was the first mass movement against the British in India?
(a) Quit India Movement
(b) Khilafat Movement
(c) Civil Disobedience Movement
(d) Swadeshi Movement

Question 11.
Explain one point of difference between the Civil disobedience Movement and the Non-Cooperation Movement.

Question 12.
In which year did Mohandas Karamchand Gandhi return to his homeland?

Question 14.
What does this picture depict? 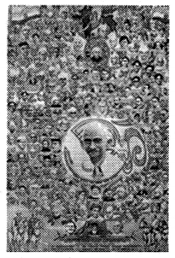 Question 15.
Nehru edited a collection of letters written to him during the national movement and published ________

Question 16.
Identify and name the personalities shown in the picture. 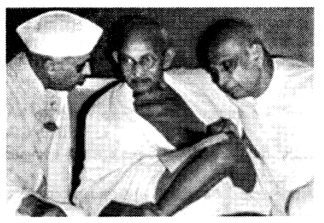 Question 17.
Indicate which of the following statements is NOT correct.
(a) Quit India was genuinely a mass movement.
(b) The Simon Commission was opposed as it had all British members.
(c) In its session held in 1930 in Lahore, the Indian National Congress passed a resolution for the complete independence of India.
(d) On the 16th of August, 1946, the Muslim League called for a “Direct Action Day”.

Question 19.
Read the information given below:

Identify and name the Act passed by the British.

Question 21.
Consider the follow g statements regarding the events of the National Movement.
(i) On 12 March 1930, Gandhiji began his march from Sabarmati Ashram towards Dandi.
(ii) In 1919, Gandhiji called for a countrywide campaign against the Rowlatt Act.
(iii) After the failure of the Cabinet Mission, Mahatma Gandhi decided to launch Quit India Movement.
Which of the following statement (s) is/are correct?
(a) I and II
(b) II and III
(c) I and III
(d) II only

We hope you found this CBSE Class 12 History Mahatma Gandhi and the Nationalist Movement MCQs Multiple Choice Questions with Answers helpful. If you have any questions about NCERT MCQ Questions for Class 12 History Chapter 13 Mahatma Gandhi and the Nationalist Movement: Civil Disobedience and Beyond with Answers Pdf free download, please share them in the comment box below and we will get back to you at the earliest possible time.