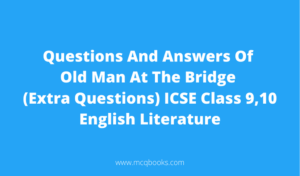 1. Who was sitting by the side of the road? Why was he there?

An old man wearing steel-rimmed spectacles, with black and dusty cloth was sitting by the side of the road. He had to leave his town because of the artillery fire. He was sitting there as he was not able to walk further,  he had already walked a lot and it was too much for his age. He was also mentally tired.

The old man sitting by the side of the road was wearing steel-rimmed spectacles. His clothes were black and dusty and his face had turned grey from dust. The old man looked after his animals in San Carlos. The artillery fire has interrupted his business of taking care of his animals, he had to run leaving them alone.

3. What is a pontoon bridge? Why are the people crossing the bridge?

A pontoon bridge is a temporary bridge using floats or shallow-draft boats used in wartime and civil emergencies. People were using the bridge to quickly cross over the river before the Fascist army opened fire. They were running to save their life as it was considered to be
the war zone.

4. What was the narrator doing in the bridge?

The narrator, says that his mission is to cross the bridge and find out how far the enemy has advanced, does so, and finds the old man who was sitting by the bridge when he crossed toward the enemy still sitting there when he crosses back. So, he stopped to talk to the man, know his difficulties and ask to help him to move to a safer place.

5. Where is the old man from? Why did he have pleasure in mentioning his native town?

The old man in the story “Old Man at the Bridge” is from San Carlos. The old man takes pleasure in mentioning the name of his native town San Carlos because he loves his native land, his birthplace.

6. What forced the old man to leave his hometown?

7. What was the old man doing on the bridge?

The old man was sitting by the side of the road. He had to leave his town because of the artillery fire. He was sitting there as he was not able to walk further,  he had already walked a lot and it was too much for his age. He was not able to cross the bridge as he was guilty of leaving his animals alone. The separation was very tough for him, he felt like he had no reason to live.

8. Why wasn’t the bridge a good place to hold on?

The bridge was not a good place to hold as it was considered to be the war zone. Everyone was crossing the bridge quickly to cross over the river before the Fascist army opened fire. They were running to save their life. So, the narrator asked the old man to move from that place and take a hold in a safer place.

9. Where did the narrator want the old man to go?

The old man was taking rest by the side of the road. As it was not safe, the narrator advised the old man to cross the bridge and catch a truck towards Barcelona. He asked him to run to save his life and take a hold in a safer place. But the old man replied that he did not know anyone there. However, he thanked the narrator for his suggestion.

10. What animals did the old man own? Discuss his relationship with the animals.

The old man had two goats, a cat and four pairs of pigeons. He had no family, the animals were his family. He used to look after them in San
Carlos. He loved them a lot. The war-separated him from his animals, the separation was very tough for him, he felt like he had no reason to live, he felt lonely

11. What did the old man do with the animals and why?

The old man owns many animals. His business was to look after them but reluctantly he had to leave them alone. The artillery, the heavy firing from the enemy forced him to leave the animals behind in his native town San Carlos.

12. What did the old man say about the birds and the goats he owns?

13. What did the old man say about politics? Why did he mention his age?

The old man meant to say when he states, that he is without politics is that he did not support in any side of the war. He mentioned his age to the soldier to tell him that he was too old to do these political things and so he will only take care of his animals. He also says that he had walked more than he could in that age and so now he was tired.

14. What was the narrator’s attitude after talking to the old man?

The narrator initially has a concern that the old man is not moving in light of an enemy attack. The narrator suggests him away to an alternate destination. He tries to assure the old man that the doves will be fine since he unlocked the cage. He also allowed the man to rest   then urged him to move. He was filled with pity when he realized that there was nothing to do with the old man.

15. What does the narrator notice while returning?

The narrator notices the old man when he crosses the bridge to reconnoitre howclose the enemies were. He finds him still sitting in the same place when he returns, in spite of advising him to leave that place as it was not safe. The enemies were approaching, everyone was busy escaping, but the old man was immobile, he was busy in his own world of thoughts.

16.’There was nothing to do about him’. Discuss

17. Compare the character of the old man and the narrator.

The old man is presented from the narrator’s perspective. He was presented to be lonely. He has to leave this place because the captain told him to leave the town because of the artillery. He had to leave all his animals and was very guilty for that and so he couldn’t cross the bridge.

The unnamed narrator is an active character in the short story. The narrator is the soldier who comes in contact with an old man at the bridge. The soldier is a scout whose duty is to cross the bridge and find how far the enemy has advanced he engages himself in the conversation with the old man. He tried to help the old man.

18. Discuss the conflict between the man and his inner self.

The conflict between the man and inner self is seen in the old man. He was the owner of few animals whom he has left alone due to the artillery and he was really guilty for doing so. He was struggling with his inner self as he has realized that he has not done justice with the animals. He was supposed to protect them.

19. What does the bridge symbolize in the story?

The bridge in the story symbolizes the point of no return for the old man. If he crosses the bridge he may protect himself physically but not mentally, he would have left all his love in Carlos. But if he stays he would be able to share the fate of his animals.

20. What was the reason behind the old man’s guilt?

The old man believed that he must have taken care of the cat, the goats, and the pigeons in San Carlos. He had to leave them alone due to the war. The man was guilty as he was not able to fulfill his responsibilities. He kept wondering what would his animals do in his absence.

21. Why was the old man found to be helpless? What did the narrator do to make him feel better?

The old man loved his animals a lot. The separation from them was very tough for him. He left like he has lost the reasons to live.

The narrator tries to engage him in a conversation. He assures the old man that his animals would be fine. He gave his best to relieve him of his worries but unfortunately, he failed. The old man has already surrendered to his fate.