These NCERT Solutions for Class 9 Social Science Economics Chapter 1 The Story of Village Palampur Questions and Answers are prepared by our highly skilled subject experts to help students while preparing for their exams.

Question 1.
The following Table given on textbook page 4 shows the land under cultivation in India in units of million hectares. Plots this on the graph provided. What does the graph show? Discuss in class. (Textbook Page 3)
Answer:
(i) Is it important to increases the area under irrigation? Why?
(ii) You have read about the crops grown in Palampur. Fill the following table based on information on the crops grown in your region.

Table: Cultivated area over the years 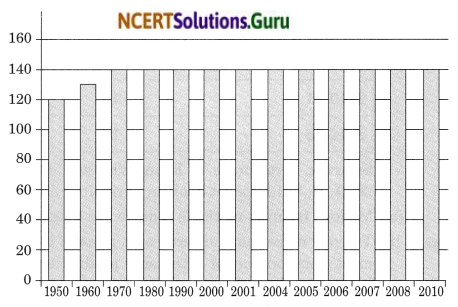 Question 1.
(i) What is the difference between multiple cropping and modern farming method?
(ii) The following table shows the production of wheat and pulses in India after the Green revolution in units of million tonnes. Plot this on a graph. Was the Green revolution equally successful for both crops? Discuss.
(iii) What is the working capital required by the farmer using modern farming methods?
Table 1.2: Production of Pulses and wheat (Million Tones)

Source: Directorate of Economics and Statistics, Department of Agriculture and Cooperative, 2010-11, 2013 Pocketbook on agricultural statistics.
(iv) Modern farming methods require the farmer to start with more cash than before. Why?
Answer:
(i) To grow more than one crop on a piece of land during the year is known as multiple cropping. It is the most common way of increasing production on a given piece of land. The other way of increasing production from the same land is to use modern farming methods. In this method, yield is measured as a crop produced on a given piece of land during a single season. Farmers of Punjab, Haryana, and Western Uttar Pradesh used the modern farming method for the first time. The farmers in these regions set up tubewells for irrigation and made use of HYV seeds, chemical fertilizers, and pesticides in farming. They also used tractors and threshers to make ploughing and harvesting faster.

(iv) Modern farming methods require HYV seeds which are more expensive than those of traditional seeds. HYV seeds need plenty of water and also chemical fertilizers and pesticides to produce the best results. For buying all these inputs, a lot of money is required. So, farmers require more cash for carrying out modern farming methods. 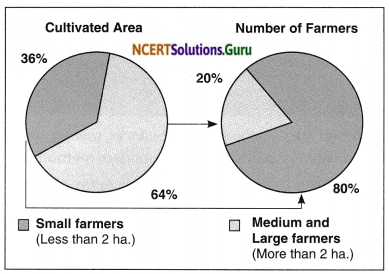 Question 1.
Would you agree that the distribution of cultivated land is unequal in Palampur.? Do you find a similar situation for India? Explain.
Answer:
Yes, the distribution of cultivated land is highly unequal in Palampur. About one-third of the 450 families are landless there. These 150 families are mostly Dalits who have no land for cultivation. Of the remaining families who own land, 240 families cultivate small plots of land less than 2 hectares in size. Cultivation of such plots doesn’t bring adequate income to the farmer’s family. 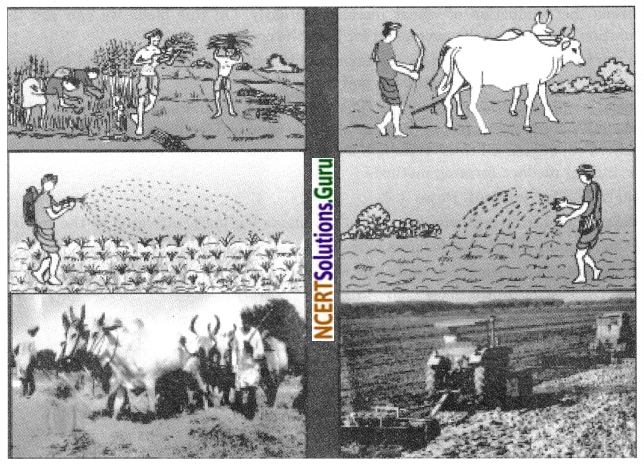 Question 1.
1. Why are farm labourers like Dala and Ramkali poor?
2. Gosaipur and Majauli are two villages in North Bihar. Out of a total of 850 households in the two villages, there are more than 250 men who are employed in rural Punjab and Haryana or in Delhi, Mumbai, Surat, Hyderabad, or Nagpur. Such migration is common in most villages across India. Why do people migrate? Can you describe (based on your imagination) the work that the migrants of Gosaipur and Majauli might do at the place of destination?
Answer:
1. Both Dala and Ramkali are poor farm labourers who work on daily wages in Palampur. This means they must regularly look for work. Although the minimum wages for a farm labourer set by the government is ₹ 115 (April 2011) per day, Dala and Ramkali get only ₹ 80. Also, there is heavy competition for work among the farm labourers in Palampur, So they agree to work for lower wages. Dala and Ramkali are under the burden of past debt which forces them to work for lower wages. They also have to look after a large family, which is a measure cause of their poverty.

2. Most people migrate to big cities like Delhi, Punjab, Haryana, etc., in search of employment or better job opportunities. People also migrate for higher education. The migrants from Gosaipur and Majauli who went to cities will probably find work as casual labourers, industrial workers, rickshaw pullers, or headload workers.

2. The labour is provided by Mishrilal himself and his family members.

3. Mishrilal has set up a small-scale unit. He has to pay for the electricity to run the machine. As a result, he is unable to increase his profit.

4. If his crushing machine becomes defective or if there is a drought, he might face a loss.

5. Shahpur is a town where traders come from different nearby villages to buy things and there is more demand for jaggery there. So, Mishrilal sells his jaggery to traders in Shahpur and not in his village where he might get a low price for his product.

Question 1.
Every village in India is surveyed once in ten years during the census and some of the details are presented in the following format. Fill up the following based on information on Palampur.
(a) Location
(b) Total Area of the Village
(c) Land Use (In Hectares)

Answer:
(a) Location: Palampur is located 3 km from Raiganj which is a big village. The nearest town is Shahpur. It is well-connected with neighbouring villages and towns. An all-weather road connects the village to Raiganj and further on to the nearest small town of Shahpur.

(b) The Total Area of the Village: The total area of village Palampur is 246 hectares.

Question 2.
Modern farming methods require more inputs which are manufactured in industry. Do you agree?
Answer:
Yes. I agree with the statement.

Question 3.
How did the spread of electricity help farmers in Palampur?
Answer:

Question 7.
In your region, talk to two labours. Choose either farm labourers or labourers working at construction sites. What wages do they get? Are they paid in cash or kind? Do they get work regularly? Are they in debt?
Answer:

2. The other way is to use modern farming methods for higher yield. Yield is measured as a crop produced on a given piece of land during a single season.

3. Farmers of Punjab, Haryana, and Western Uttar Pradesh were the first to try out the modern farming method in India. The farmers in these regions set up tubewells for irrigation and made use of HYV seeds, chemical fertilizers, and pesticides in farming.

4. Some of them bought farm machinery like tractors and threshers, which made ploughing and harvesting faster. They were rewarded with high yields of wheat.

2. Since he lacks money, so he faces many problems in carrying out his job. He has no irrigation facilities which badly affects the productivity of his land.

3. He has no working capital as a result of which he fails to buy modern machinery, HYV seeds, or insecticides, and pesticides.

4. In order to manage the capital, he has to borrow money from large farmers or village moneylenders, or traders who supply various inputs for cultivation. The rate of interest on such loans is very high. He is put in great distress to repay the loan. Sometimes he falls into a debt trap.

Question 10.
How do the medium and large farmers obtain capital for farming? How is it different from the small farmers?
Answer:
The medium and large farmers are capable enough to use their own savings from production to arrange for capital during the next season. They might also use the savings to buy cattle, trucks, or to set up shops. These constitute the capital for non-farm activities.

The small farmers, on the other hand, find it difficult to obtain capital. They constitute about 80 percent of total farmers in India. Because of the small size of their plots, their production is not enough. The lack of surplus means that they are unable to obtain capital from their own savings and to borrow. Besides the debt, many of the small farmers have to do additional work as farm labourers to feed themselves and their families.

Question 11.
On what terms did Savita get a loan from Tejpal Singh? Would Savita’s condition be different if she could get a loan from the bank at a low rate of interest?
Answer:
1. Savita is a small farmer. She plans to cultivate wheat on her one hectare of land. Besides seeds, fertilizers, and pesticides, she needs cash to buy water and repair her farm instruments.

2. Since she doesn’t have money, so she decides to borrow from Tejpal Singh, who is a big farmer. Tejpal Singh agrees to give Savita the loan at an interest rate of 24 percent for four months, which is a very high-interest rate.

3. Savita also has to promise to work on his field as a farm labourer during the harvest season at ₹ 35 per day. Obviously, this wage is quite low. If Savita had taken the loan from the bank, the interest rate would have been lower and she could have easily repaid the loan and her condition would have been far better. But Savita knows getting a loan from the bank is difficult for a small farmer like her. So she agrees to Tejpal’s tough conditions and is bound to face difficulties.

Later on, they started to use the Persian wheels to draw water from the wells and irrigate small fields. Eventually, several technological developments took place as a result of which electric run tubewells came into existence. These tube wells could irrigate much larger areas of land more effectively. The first few tubewells were installed by the government. Soon, farmers started setting up private tubewells.

In the farming methods, traditionally they ploughed the field with ploughs drawn by bullocks which were time-consuming. They used cow-dung and other natural manure as fertilizers. However, with changes in technology, they started using HYV seeds, chemical fertilizers, and pesticides to produce the best results. Some of them bought modern farm machinery like tractors and threshers, which made ploughing and harvesting faster. They were rewarded with high yields, which eventually improved their lives.

Question 13.
What are the non-farm production activities taking place in your region? Make a shortlist.
Answer: