These NCERT Solutions for Class 8 Science Chapter 12 Friction Questions and Answers are prepared by our highly skilled subject experts to help students while preparing for their exams. 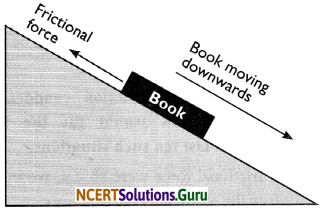 Question 5.
You spill a bucket of soapy water on a marble floor accidently. Would it make it easier or more difficult for you to walk on the floor? Why?
Answer:
We are able to walk because of the friction present between our feet and the ground. In order to walk, we push the ground in the backward direction with our feet. The force of friction pushes it in the forward direction and allows us to walk. The force of friction between the ground and feet decreases when there is soapy water spilled on the floor. It acts as a lubricant. Hence, it becomes difficult to walk on the soapy floor.

Question 6.
Explain why sportsmen use shoes with spikes.
Answer:
Shoes with spikes offer more friction because of more irregularities in the surface. This gives better grip to sportsmen while running.

Question 7.
Iqbal has to push a lighter box and Seema has to push a similar heavier box on the same floor. Who will have to apply a larger force and why?
Answer:
Force of friction arises because of interlocking of irregularities on the two surfaces in contact. When a heavy object is placed on the floor, the interlocking of irregularities on the surfaces of box and floor becomes strong. This is because the two surfaces in contact are pressed harder. Hence, more force is required to overcome the interlocking. Thus, to push the heavier box, Seema has to apply a greater force than Iqbal.

Question 8.
Explain why the sliding friction is less than the static friction.
Answer:
When something is static, a greater force is required to break the interlocking between two surfaces. When something is in motion, the surfaces do not get enough time to interlock properly and a smaller force is required to keep the object in motion. Hence, sliding friction is less than static friction.

Friction as a foe:

Question 10.
Explain why objects moving in fluids must have special shapes.
Answer:
When a body moves through a fluid, it experiences a force which tries to oppose its motion through the fluid. This opposing force is known as drag. This frictional force depends on the shape of the body. By giving the objects a special shape, called the streamlined shape, the force of friction acting on it can be minimised. Hence, it becomes easier for a body to move through the fluid.

Question 1.
What role does friction play in the sport of your choice? Collect some pictures of that sport in action where friction is either supporting it or opposing it. Display these pictures with proper captions on the bulletin board of your classroom.
Hint:
Supporting friction:
a. Cycling: The friction between the tyres and the road is necessary for the cycle to function.
b. Running: The friction between the athlete’s feet and the ground surface is necessary otherwise the runner would fall over.
c. Swimming: The friction in the water is required for the swimmer to be propelled forward.

Question 2.
Imagine that friction suddenly vanishes. How would the life be affected. List ten such situations.
Hint:
If frictional force were absent, we may face the following consequences:

Question 3.
Visit a shop which sells sports shoes. Observe the soles of shoes meant for various sports. Describe your observations.
Hint:
Sports shoes have rough sole and spikes and the reason behind this is to give a better grip and traction on the grassy field. Also, if it is a rainy day, players (in football) can make better cuts with the cleats.

Question 4.
A toy to play with: Take an empty match box. Take out its tray. Cut a used refill of a ball pen of the same width as the tray as shown in the figure below. Fix the refill with two pins on the top of the tray as shown in figure. Make two holes on the opposite sides of the tray. Make sure that the holes are large enough to allow a thread to pass through them easily. Take a thread about a metre long and pass it through the holes as shown. Fix beads at the two ends of the thread so that it does not come out. Insert the tray in the outer cover of the matchbox.
Suspend the match box by the thread. Leave the thread loose. The match box will start falling down due to gravity. Tighten the thread now and observe what happens.
Explain your observation. Can you relate it to friction?

Hint:
Do it yourself.

Observation: In the first case, as the brick surface in contact with the ground is very rough, the brick experienced greater frictional force. But in the second case, when polythene is wrapped around the brick, the surface becomes smoother. So, in this case, the frictional force is less. The reading of spring balance is more than that of when brick was wrapped with polythene. Jute is also rough and exerts a larger frictional force.

Conclusion: A rough surface exerts a greater frictional force than a smooth surface.

Objective: To study that force of friction depends upon the nature of the two surfaces in contact.
Materials Required: A wooden board, a pencil cell, bricks or books, a piece of cloth and sand.
Procedure: 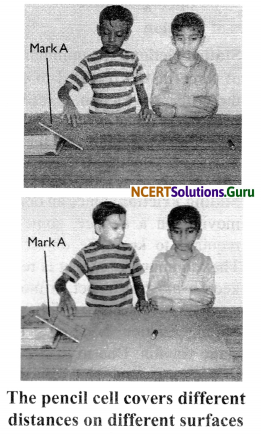 Conclusion: Friction depends upon the nature of surfaces in contact.

Spring balance: It is a device used for measuring the force acting on an object. It consists of a coiled spring and a pointer moving on a graduated scale. When a force is applied, stretching of spring takes place. The reading on the scale indicated by the pointer gives the magnitude of the force. 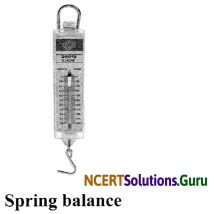 Friction-A Necessary Evil: Friction is a necessary evil because it has both harmful and beneficial effects.
Benefits of friction:

Ways to Increase Friction:
i. Rubber grips are put on bicycle handles, electrical tools and on many other tools. Increased friction helps in giving better grip on these objects.
ii. A surface can be made rough with the help of sand paper in order to increase friction.
iii. Soles of shoes have grooves on them. Grooved soles give more friction to the ground which gives better grip when we walk. Shoes with worn out soles may be slippery. 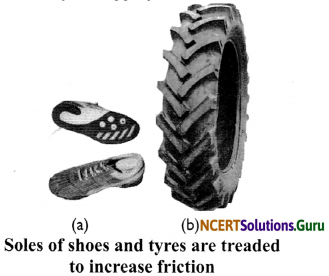 iv. The tyres of vehicles have treads for better grip over the road. It provides friction to the surface of tyres. When treads are worn out, the tyres need to be replaced with new ones.
v. Holding a bottle cap with a thick towel helps in increasing friction. Increased friction makes it easier to open the bottle cap.

Ways to Reduce Friction:
i. Lubricating oil and grease are used in machines to reduce friction between the moving parts. 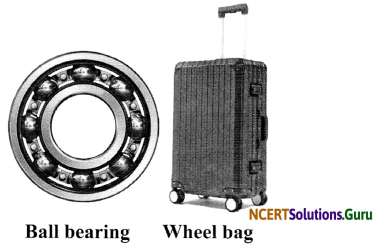 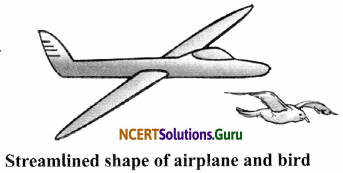 Question 1.
What is friction?
Answer:
The force which opposes the relative movement between two surfaces in contact is called friction.

Question 3.
Why are truck tyres treaded?
Answer:
Truck tyres are treaded to increase friction so as to provide a better grip on the ground.

Question 6.
Can we reduce friction to zero by using lubricants?
Answer:
No, it is not possible to eliminate friction entirely. No surface can have zero friction.

Question 9.
Why does the force of friction exist?
Answer:
Friction is produced by the interlocking of the irregularities on the two surfaces in contact.

Question 11.
Why are the soles of shoes grooved?
Answer:
Soles of shoes are grooved so as to provide better grip between the shoes and the ground.

Question 13.
On which factors does the friction depend?
Answer:
Friction depends on the nature and pressure of surfaces in contact.

Question 14.
What is meant by air resistance?
Answer:
The friction between a moving object and the air through which it moves is known as air resistance.

Question 16.
Name the device used for measuring the force acting on an object.
Answer:
Spring balance.

Question 17.
Define viscous drag.
Answer:
The opposition offered to the motion of an object by a fluid is called viscous drag.

Question 1.
It is easier to open a bottle cap by gripping it with a towel. Why?
Answer:
Rough surface of towel helps in increasing friction and thus provides a better grip for application of a longer force. The towel, thus, makes it easier to open the bottle cap.

Question 8.
Why is it easier to tie a jute knot than a silk knot?
Answer:
The coefficient of friction of jute on jute is much more than that of silk on silk. Hence, two strands of a jute rope can ‘grip’ each other much more strongly than the two strands of a silk rope. This makes it easier to tie a knot in a jute rope as compared to that in a silk rope.

Question 9.
What is spring balance?
Answer:
It is a device used for measuring the force acting on an object. It contains a coiled spring. The spring gets stretched when a force is applied on it. Stretching of the spring is measured by a pointer moving on a graduated scale. The reading on the scale gives the magnitude of force.

Question 10.
How does lubrication reduce friction?
Answer:
Friction is due to roughness of surfaces. Any process that makes the contact surfaces smooth will reduce friction. Friction can be decreased by adding lubricants to the surfaces like oil, grease or graphite. The sliding surfaces then have a thin layer of the lubricants between them. The friction is then between the surfaces and the lubricant layer which is much less. For example, graphite is used as a lubricant in machines where the moving parts reach very high temperatures.
While playing carrom, fine talcum powder on the carrom board reduces friction.

Question 13.
Aman and Rohan are riding their bicycles on the same concrete road. Aman has new tyres on his bicycle while Rohan has tyres that are old and used. Aman suggested Rohan to change the tyres of his bicycle as soon as possible.
a. Which of the two boys is more likely to slip while moving through a patch of the rod which has lubricating oil spilled over it.
b. Why has Aman advised Rohan to change the tyres of his bicycle?
Answer:
a. Rohan.
b. This is because the worn out tyres do not offer friction and chances of skidding of vehicle increase. 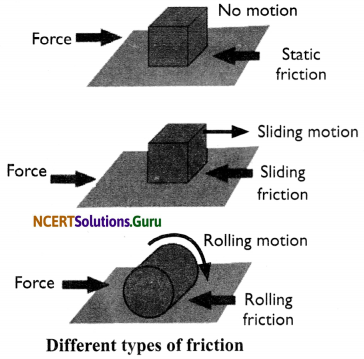 Question 1.
Observe the following figure and answer the questions.

a. What kind of friction do these things encounter.
b. What type of shape do they have?
c. How does this shape help than.
Answer:
a. Fluid friction.
b. They have a streamlined shape.
c. Streamlined shape reduces fluid friction and makes their movement easy.

Question 2.
Draw a diagram to show the surface irregularities.
Answer: 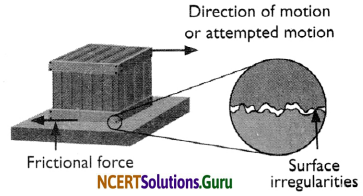 Question 3.
Observe the following figure and answer the questions.