These NCERT Solutions for Class 6 Science Chapter 5 Separation of Substances Questions and Answers are prepared by our highly skilled subject experts to help students while preparing for their exams.

Question 2.
What is winnowing? Where is it used?
Answer:
The process of separating a mixture of light and heavy particles using wind is called winnowing. For example, separating wheat from chaff. Winnowing is used when one components is lighter than the other. The wind blows away chaff while the grain forms separate pile. 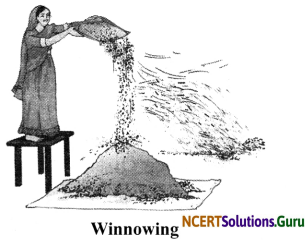 Question 4.
What is sieving? Where is it used?
Answer:
Sieving is a process of separation of particles of different sizes using a sieve. Small and fine sieves are used in the kitchen to separate bran and other impurities from flour. The impurities remain on the sieve and the flour passes through. Bigger sieves are used at construction sites to separate pebbles and stones from sand.

Question 8.
Fill in the blanks.
a. The method of separating seeds of paddy from its stalks is called ……………..
b. When milk, cooled after boiling, is poured onto a piece of cloth the cream (malai) is left behind on it. This process of separating cream from milk is an example of ……………..
c. Salt is obtained from seawater by the process of ……………..
d. Impurities settled at the bottom when muddy water was kept overnight in a bucket. The clear water was then poured off from the top. The process of separation used in this example is called ……………..
Answer:
a. threshing
b. filtration
c. evaporation
d. sedimentation and decantation

Question 10.
Lemonade is prepared by mixing lemon juice and sugar in water. You wish to add ice to cool it. Should you add ice to the lemonade before or after dissolving sugar? In which case would it be possible to dissolve more sugar?
Answer:
We should add ice after dissolving sugar. When the temperature is high, then more sugar can be dissolved. After mixing ice, it gets cool and less sugar will dissolve in it.

Question 1.
Visit a nearby dairy and report about the processes used to separate cream from milk.
Answer:
Do it yourself.

Question 2.
You have tried a number of methods to separate impurities like mud from water. Sometimes, the water obtained after employing all these processes could still be a little muddy. Let us see if we can remove even this impurity completely. Take this filtered water in a glass. Tie a thread to a small piece of alum. Suspend the piece of alum in the water and swirl. Did the water become clear? What happened to the mud? This process is called loading. Talk to some elders in your family to find out whether they have seen or used this process.
Answer:
Do it yourself.

Observations: More salt can be dissolved in a saturated solution on heating.
Conclusion: On increasing temperature, solubility of substances also increase.

Principle of Separation: The constituents of a mixture do not lose their original properties such as particle size, density, melting point, boiling point, etc. This property is used in separation methods.

Methods of Separation: Different methods are used for separating substances that are mixed together. Let us read about some common methods that are used.
i. Handpicking: This method of handpicking can be used for separating slightly larger-sized impurities such as the pieces of dirt, stone and husk from wheat, rice or pulses. The quantity of such impurities is usually not very large. In such condition, we find that handpicking is a convenient method of separation. 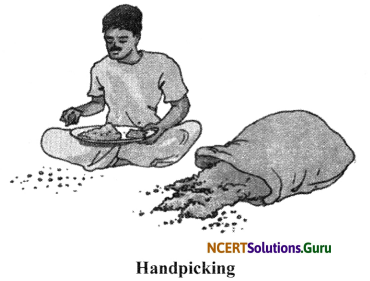 ii. Winnowing: It is a process used to separate heavier and lighter dust particles or components of a mixture by wind or by blowing air. This method is commonly used by fanners to separate lighter husk particles from heavier seeds of grains. The simplest way is to stand on a higher level and allow the mixture to fall on the ground. The wind blows away the light components while the heavier grains fall down to form a heap. The separated chaff is used as fodder for cattle. 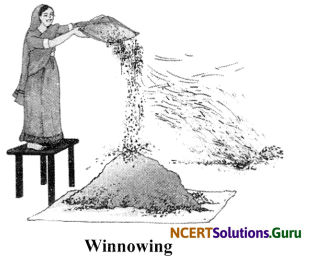 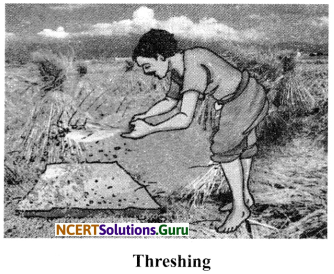 iv. Sieving: It is a method of separation of particles of different sizes using a sieve. Small and fine sieves are used in the kitchen to separate bran and other impurities from flour. The impurities remain on the sieve and the flour passes through. Bigger sieves are used at construction sites to separate pebbles and stones from sand. 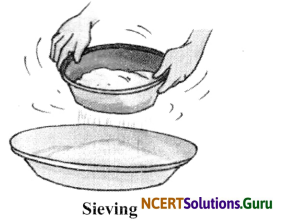 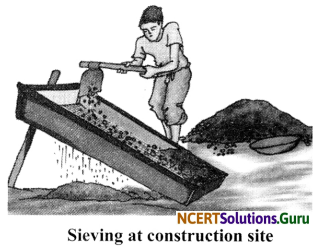 v. Magnetic Separation: In this method a magnet is used for picking up iron pieces, nails, pins, etc. from grains or any other commodity. On a larger scale, a powerful magnet is employed for separating scrap iron from non-magnetic waste materials. 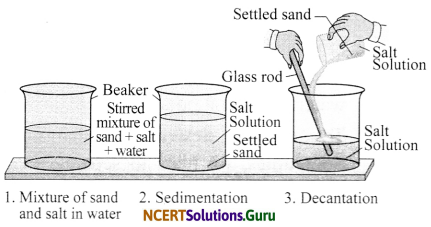 Separation of a mixture of sand and water

The liquid above the sediments is known as the supernatant liquid. The process of pouring out the clear upper liquid without disturbing the sediments is called decantation. The solid particles which are insoluble in a liquid can be separated by decantation. For example, a mixture of sand and water contains sand particles suspended in water. So,sand can be separated from sand-water mixture by the method of sedimentation and decantation.

vii. Filtration: Decantation is not enough for complete separation of a solid-liquid mixture. This can be done better by filtration in which the mixture is dropped on a porous material known as filter.

The liquid passes through the filter and comes down as filtrate. The insoluble solid left behind is known as residue. In this way, a mixture of an insoluble solid in a liquid is separated into the solid residue and clear filtrate. 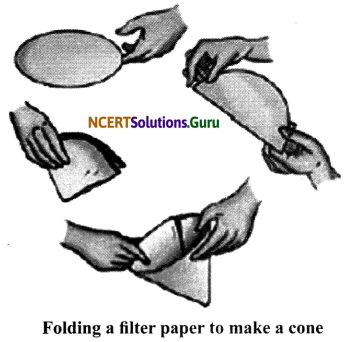 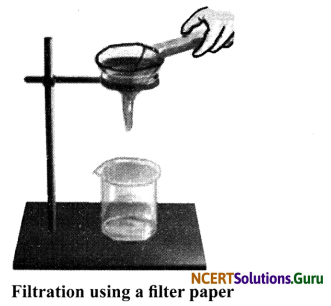 Observations: Soil residue is left behind in the funnel and clear water is obtained as filtrate in the beaker.
Conclusion: Muddy water can be purified by filtration.

Alum is used to load suspended clay particles in water. The dissolved particles of alum load the fine particles of clay in water. They become heavier and settle down very fast. The clear water on top is then decanted or filtered.

Cream separating machines are used in dairies. In this machine, milk is rotated at a high speed. Cream being lighter, collects towards the centre. The milk being heavier settles down below the cream layer. The two are then taken out from two separate taps,

x. Evaporation: The process of conversion of water into its vapour is called evaporation. This process takes place continuously wherever water is present. For example, sea water contains many types of salts mixed in it. One of these salts is the common salt. When sea water is allowed to stand in shallow pits, water gets heated by sunlight and slowly turns into water vapour. 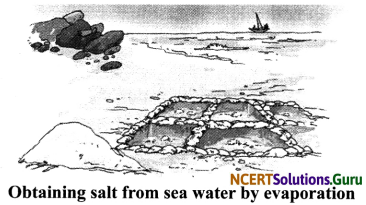 After few days, the water evaporates completely leaving behind the dry solid particles. The common salt is then obtained from this mixture of solid particles by further purification. 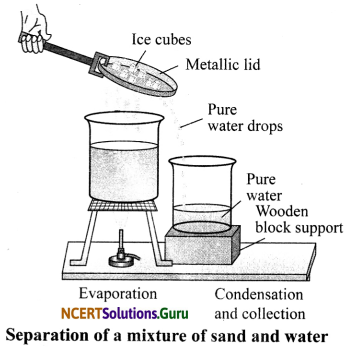 Use of more than one method of separation: The method to be used for separating a mixture into its components depends on the nature of components.

Some of the mixtures can be separated by a single method but various mixtures can be separated into individual components by using a combination of various methods. These methods are applied turn by turn. Suppose you are given a mixture of sand, iron fillings, common salt, solid salt and naphthalene. You can separate its components as follows:
Iron fillings: by magnetic separation
Naphthalene: by sublimation

Salt and sand are dissolved in water. Salt is soluble but sand being insoluble, settles and can be separated by sedimentation, decantation followed by evaporation of salt water.

Question 2.
Which method is used to separate stones from grains on small scale?
Answer:
Handpicking.

Question 4.
Which method is used to separate heavier and lighter components of a mixture by wind or blowing air?
Answer:
Winnowing.

Question 5.
What is decantation?
Answer:
The process in which water is removed when heavier component of mixture settles is called decantation.

Question 7.
What is evaporation?
Answer:
The process of conversion of water into its vapour at normal temperature is called evaporation.

Question 9.
We dissolve salt in water. By what way the same amount of water could be made to dissolve more salt before getting saturated?
Answer:
On heating the water.

Question 10.
Define condensation.
Answer:
The process in which a gas changes into its liquid form is called condensation.

Question 11.
What happens when a saturated solution is heated?
Answer:
It becomes unsaturated.

Question 13.
Mention one purpose of separating the constituents of a mixture.
Answer:
To remove the unusual or harmful compound and to obtain the useful component.

Question 1.
What is evaporation? Give one large scale use of the process of evaporation.
Answer:
The process of conversion of water into vapour is called evaporation. This process takes place continuously where water is present.

Question 2.
What do you mean by decantation? What is its use?
Answer:
Decantation is a process by which we can remove a liquid without disturbing the solid settled down in the bottom. This method can be used to separate mixture of sand and water

Question 4.
The mixture of a powdered white solid A and a liquid B can be separated by filtration. The solid A is left behind on the filter paper but clear liquid B passes through the filter paper and collects in the beaker kept below.
a. Name some solid which could be like A.
b. Name the liquid which B could be.
c. What name is given to the solid left on the filter paper?
d. What name is given to the clear liquid collected in the beaker?
Answer:
a. Chalk powder
b. Water
c. Residue
d. Filtrate

Question 5.
Name the method that should be used to separate the following mixtures:
a. Grain from wheat flour
b. Grain from the stalks
c. Small black pebbles from a plateful of pulses
d. Wheat from chaff
Answer:
a. Sieving
b. Threshing
c. Handpicking
d. Winnowing

Question 6.
How will you prepare cheese (paneer)?
Answer:
For making cheese, a few drops of lemon juice are added to milk as it boils. This gives a mixture of particles of solid cheese and liquid. The cheese is then separated by filtering the mixture through a fine cloth or strainer.

Question 7.
What is mixture?
Answer:
When two or more than two substances are mixed together in any ratio then it is called a mixture.

Question 8.
What is a homogeneous mixture?
Answer:
A mixture in which the various components are uniformly mixed or dissolved and each part of the mixture has the same properties is called a homogenous mixture.

Question 1.
What is filtration? Give an example.
Answer:
Decantation is not enough for complete separation of a solid-liquid mixture. This can be done better by filtration, in which the mixture is dropped on a porous material known as filter. The liquid passes through the filter and comes down as filtrate. The insoluble solid left behind is known as residue. When you make tea, you filter it through a strainer having wire gauze. The tea extract comes down as the filtrate and the boiled tea leaves are left behind as the residue.

Question 2.
Why is loading used to separate suspended impurities? Explain.
Answer:
Sometimes water of a river or canal is muddy or turbid due to hanging of very fine particles of clay. They cannot be removed by decantation or filtration. In such a case loading is useful.

Alum is used to load suspended clay particles in water. The dissolved particles of alum load the fine particles of clay in water. They become heavier and settle down very fast. The clear water on top is then decanted or filtered.

Question 1.
a. Identify the pictures A and B:

b. Which of the above is used on a large scale separation of grains from chaff?
Answer:
a. A-Handpicking; B-Winnowing
b. Winnowing

Question 2.
Observe the picture and answer the questions. 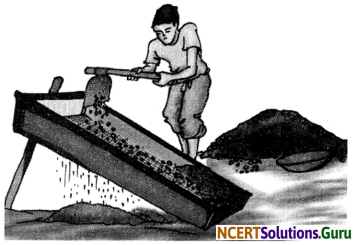 a. Identify the seperation technique?
b. Where is it being used.
Answer:
a. Sieving
b. It is being used by a worker at construction site to separate pebbles and stones from sand.