These NCERT Solutions for Class 6 Science Chapter 6 Changes Around Us Questions and Answers are prepared by our highly skilled subject experts to help students while preparing for their exams.

Changes Around Us NCERT Solutions for Class 6 Science Chapter 6

Question 1.
To walk through a waterlogged area, you usually shorten the length of your dress by folding it. Can this change be reversed?
Answer:
Yes, by unfolding the dress we can reverse this change.

Question 2.
You accidentally dropped your favourite toy and broke it. This is a change you did not want. Can this change be reversed?
Answer:
No, it cannot be reversed. It is an irreversible change.

Question 3.
Some changes are listed in the following table. For each change, write in the blank column, whether the change can be reversed or not.

Question 4.
A drawing sheet changes when you draw a picture on it. Can you reverse this change?
Answer:
By erasing the drawing, we can undo the change. For example, if we draw with the help of pencil, we can erase the drawing by using an eraser. Then, it is a reversible change. If we draw using a pen, we cannot erase the drawing. Then this change cannot be reversed.

Question 5.
Give examples to explain the difference between changes that can or cannot be reversed.
Answer:
Examples of Reversible Changes:

Question 6.
A thick coating of a paste of Plaster of Paris (POP) is applied over the bandage on a fractured bone. It becomes hard on drying to keep the fractured bone immobilised. Can the change in POP be reversed?
Answer:
When water is added to POP, it undergoes a chemical change. Its composition changes and is converted into another substance. Since it is a chemical change, it cannot be reversed.

Question 7.
A bag of cement lying in the open gets wet due to rain during the night. The next day the sun shines brightly. Do you think the changes, which have occurred in the cement, could be reversed?
Answer:
Due to water, cement hardens and its composition changes. Chemical changes, in general, are irreversible changes. Hence, it is a chemical change which cannot be reversed.

Question 1.
Take a lemon, a paintbrush and a piece of paper. Cut the lemon and squeeze out its juice in a cup. Dip the brush in the lemon juice and write a message on the paper. Let the paper dry and you find that the letters of your message become invisible. Now, press the paper with hot iron or warm it by holding it above the flame of a candle (Take care that it does not catch fire). As the paper gets warm, invisible letters change into dark brown colour. Identify the changes that can be reversed in this process.
Answer:
Irreversible changes: Cutting and squeezing of lemon, writing message on paper.
Reversible changes: Drying and wetting of the paper.

Question 2.
Observe preparation of dishes at your home. Identify two changes that can be reversed.
Answer:
Do it yourself.

Question 3.
Maintain a record for one year of the seasonal changes in vegetables, clothing, nature and events around you. Identify the changes that can or cannot be reversed.
Answer:
Do it yourself.

Objective: To show that a balloon changes its size and shape on blowing air into it and the change is reversible.
Materials Required: A balloon.
Procedure: 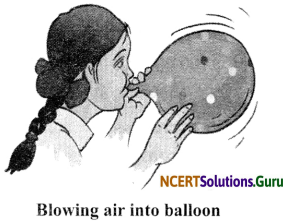 Observations: On blowing, the size and shape of the balloon have changed. It regains its shape when air is released.
Conclusion: It is possible to get the balloon back to its original shape and size. Therefore, it is a reversible change.

Objective: To make a toy aeroplane by folding paper and show that the change is reversible.
Materials Required: A piece of paper.
Procedure:

Observation: The sheet of paper has changed into a toy aeroplane. On unfolding, the paper regains original form.

Conclusion: It is a reversible change.

Objective: To show that rolling of roti out of dough is a reversible change.
Materials Required: Dough (kneaded flour) and rolling pin.
Procedure:

Observations: The dough rolled into roti was converted back in dough boll.
Conclusion: It is a reversible change.

Question 1.
Which type of change ¡s growing of a plant – fast or slow?
Answer:
Slow change.

Question 2.
Do you think that cooking of food is an irreversible change?
Answer:
Yes.

Question 3.
Rolling out roti from dough ball is a slow change or a fast change?
Answer:
Fast change.

Question 8.
Give an example to show that pressure changes the shape of a material.
Answer:
When an inflated balloon is pressed between two hands, its shape and size change.

Question 11.
What are the different ways in which changes can be caused?
Answer:
By mixing, by applying force, by heating and by cooling.

Question 12.
What do you mean by expansion?
Answer:
Expansion is a phenomenon in which a substance expands or changes its shape.

Question 1.
Give the characteristics of physical changes.
Answer:

Question 2.
Give the characteristics of chemical changes.
Answer:

Question 8.
How do we convert milk into curd and what type of change is it?
Answer:
The warm milk is taken in a vessel and a small quantity of curd is added into it. The milk is stirred and it is kept aside for few hours without any disturbance. Finally, the milk is converted into curd. However, curd formed cannot be converted into milk again indicating that it is an irreversible change.

Question 9.
What will be the change when sugar is heated?
Answer:
When sugar is continuously heated, a black powdery substance is formed which is called charcoal. Since a new product is formed, it is termed to be a chemical change.

Question 5.
When is a change said to have taken place in a material? Explain with the help of an example.
Answer:
The things around us have certain properties such as state (solid, liquid, gas), position, shape, size, colour, temperature, composition and structure, etc. When one or more properties of a thing become different, the changes in it have taken place. Changes involve different kinds of alterations in the things. When a change takes place, there may be change in the state, position, shape, size, colour, temperature, composition or structure of the material of the object. Example: when ice melts, it forms water. Ice is a solid, whereas water is a liquid. So, the melting of ice involves a change in state (from solid to liquid state).

Question 1.
Observe the given pictures and answer the following questions:

Question 2.
Observe the given picture and answer the questions that follow: 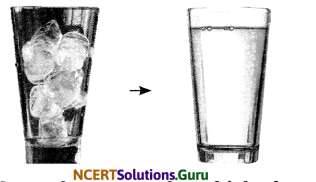