If you’re looking for a way to enhance your Social Science, then look no further than the NCERT MCQ Questions for Class 8 History Chapter 6 Colonialism and the City with Answers Pdf free download. MCQ Questions for Class 8 Social Science with Answers is perfect for those who are in class 8 and want to get ahead of everyone else by mastering their subject skills as soon as possible! So, ace up your preparation with MCQ of Chapter 6 History Objective Questions.

Colonialism and the City Class 8 MCQs Questions with Answers

Solving MCQ on Colonialism and the City Class 8 with Answers can be of great help to students as they will be aware of all the concepts. These Class 8 SST History Chapter 6 MCQ with Answers pave for a quick revision, thereby helping you learn more about this subject.

Question 2.
Why did the Lahori Gate Improvement Scheme was planned in 1888?
(a) Draw the residents away from the old city to a new type of market square.
(b) Reduce congestion.
(c) Make way for hand-pull carts.
(d) Increase population.

Question 4.
Which is the largest and grandest mosque in Delhi?
(a) Jama Masjid
(b) Sunheri
(c) Begumpur mosque
(d) None of them

Question 5.
Which of the following was not a Presidency?
(a) Bombay
(b) Madras
(c) Bengal
(d) Delhi

Question 6.
What are the Presidency cities under British in India?
(a) Bombay
(b) Madras
(c) Calcutta
(d) All of these

Question 7.
What was the immediate cause of the rise of modem cities in western world?
(a) Industrialization
(b) Urbanization
(c) De-urbanization
(d) None of these

Question 8.
Name a temple town of South India?
(a) Son Temple
(b) Madurai Temple
(c) Balaji Temple
(d) All of these

Question 9.
Name three court towns developed during 17th century?
(a) Delhi
(b) Agra
(c) Lahore
(d) All of these 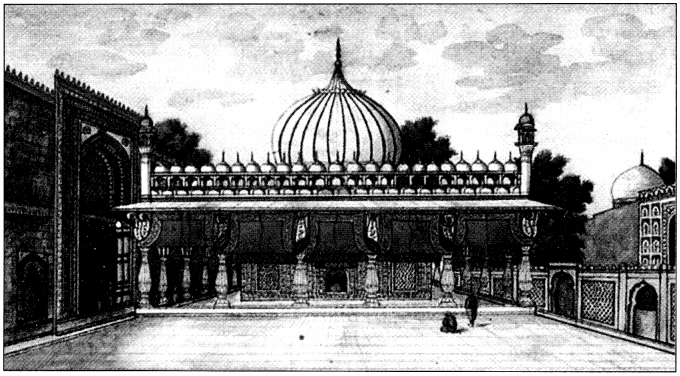 1. Name the shrine shown in the picture.
2. Where the above shown shrine located in India.

Hope you found this information on NCERT MCQ Questions for Class 8 History Chapter 6 Colonialism and the City with Answers Pdf free download useful. We are always here to help, so if there is any specific query or question with CBSE Social Science Colonialism and the City Class 8 MCQs Multiple Choice Questions with Answers or any other topic please let us know in the comments below.