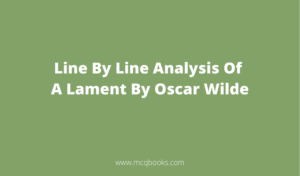 Oscar Fingal O’Flahertie Wills Wilde was born on 16th October 1854 in Dublin, Ireland. He was born to Lady Jane Wilde and William Wilde, an Anglo- Irish couple. He was a poet and a playwright. Wilde got baptised in an Anglican church. He is known for his poems and epigrams. Wilde could fluently speak German and French. He studied in Trinity College, Dublin and then in Oxford. Wilde was an excellent student.

After university, he lectured on “English Renaissance in Art” and interior decoration as well. his most famous creation is the novel “The Picture of Dorian Gray” published in 1891 in a book form. Oscar Wilde was deeply influenced by Catholicism.

Wilde had also worked as a journalist and had a theatrical career as well. He got married to Constance Lloyd in 1884.

The poem ‘A Lament’ is a creation of Wilde, where he has expressed his sorrow and grief for the section of society that works extremely hard day and night just to fulfil their basic needs. Simultaneously, he had also mentioned the other strata which is packed with gold and richness and wealth. This stratum cares about nothing since they live in comfort and luxury and lacks nothing. The poet says that his heart feels for the people who work so hard in so much pain and difficulties and want to build a ladder to reach God. This poem mainly highlights the hardships faced by the common man in their daily lives.

Structure of the Poem

“O well for him who lives at ease
With garnered gold in wide domain,
Nor heeds the splashing of the rain,
The crashing down of forest trees.

O well for him who ne’er hath known
The travail of the hungry years,
A father grey with grief and tears,
A mother weeping all alone.

But well for him whose feet hath trod
The weary road of toil and strife,
Yet from the sorrows of his life
Builds ladders to be nearer God.”

“A Lament” is a 12-line poem with the rhyming scheme abba cddc effe. The poem depicts the sorrow and hardships of ordinary people.

Line by Line Analysis of the Poem

“O well for him who lives at ease
With garnered gold in wide domain,
Nor heeds the splashing of the rain,
The crashing down of forest trees. –“

In the above lines, the poet is referring to the upper and wealthy class of society. This class is filled with gold. The people here do not care about the rains and the crashing down of forest trees, unlike the poorer section; that gets most affected during a heavy downpour or when trees fall down.

“O well for him who ne’er hath known
The travail of the hungry years,
A father grey with grief and tears,
A mother weeping all alone. –.”

The rich do not know what hunger is, since they have never faced the pain of hunger and starvation. The seventh and eighth lines shift focus from the rich to the poorer section who earn their living after doing major hardships. The lines talk about the father who is filled with sorrow and grief and is in tears since he probably was unable to feed his family or probably just because of all the extreme hardships that he and his family had to go through. The eighth line refers to the mother who is crying for the same reason. The overall reason behind this grief is poverty.

“But well for him whose feet hath trod
The weary road of toil and strife,
Yet from the sorrows of his life
Builds ladders to be nearer God.”

The poet’s heart reached out for those who earn a living through extremely hard work. The ordinary people walk on their feet on the path of tiredness, conflicts and hard work. The journey is weary enough to make them give up, but they still dream of building ladders from their grief and sorrows to reach God. This shows that they survive on hope, that someday things will be better and the conditions would improve.

Figures of Speech Used in the Poem

1. Consonance
Consonance is a figure of speech in which similar consonants are used in neighbouring words with different vowel sounds.
“A father grey with grief and tears,”
“With garnered gold in wide domain”

2. Alliteration
This is a figure of speech where closely associated words or corresponding words begin with the same alphabet in a sentence.
“With garnered gold in wide domain”
“A father grey with grief and tears,”

3. Transferred Epithet
In this poetic device, human emotion is associated with a non-living object after getting displaced from the person.
“The travail of the hungry years,”
The years are not actually hungry. The poor people are hungry and they live in hunger for years.

“The weary road of toil and strife,”
The life and journey of the poor section is weary and tired. The road, by itself, is not weary.

4. Anaphora
It is a figure of speech, where various sentences or verses begin with the same word.
“A father grey with grief and tears,
A mother weeping all alone. –”

The Theme Of The Poem

The poem shows the economic difference prevalent in society. The mood of the poem can be considered to be grief. The central theme of the poem revolves around how one section of the society is packed with gold and wealth, and the other section does not even get proper food to eat or a place to sleep. There is a lack of uniformity in the distribution of wealth.