These NCERT Solutions for Class 9 Science Chapter 3 Atoms and Molecules Questions and Answers are prepared by our highly skilled subject experts to help students while preparing for their exams.

For example, from the chemical formula CO2 of carbon dioxide, we come to know that one carbon atom and two oxygen atoms are chemically bonded together to form one molecule of the compound, carbon dioxide.

In this case also, only 11 g of carbon dioxide will be formed.
The above answer is governed by the law of constant proportions.

Question 3.
What are polyatomic ions? Give examples?
Answer:
A polyatomic ion is a group of atoms carrying a charge (positive or negative). For example, ammonium ion (NH4+), hydroxide ion (OH–), carbonate ion (CO32-), sulphate ion (SO42-).

Question 5.
Give the names of the elements present in the following compounds:
(a) Quick lime
(b) Hydrogen bromide
(c) Baking powder
(d) Potassium sulphate
Answer:

Question 2.
Explain law of constant proportion.
Answer:
In a chemical substance the elements are always present in definite proportions by mass.
E.g., In water, the ratio of the mass of hydrogen to the mass of oxygen H : O is always 1 : 8

Question 4.
Define atom.
Answer:
The smallest particle of matter, which can take part in a chemical reaction is called atom.

Question 5.
Define molecule.
Answer:
The smallest particle of an element or compound which can exist independently is called molecule.

Question 6.
Define atomicity.
Answer:
The number of atoms constituting a molecule is known as its atomicity.

Question 8.
How do atoms exist?
Answer:
Atoms exist in the form of atom, molecule or ions.

Question 2.
What is IUPAC, give its one function?
Answer:
IUPAC stands for International Union of Pure and Applied Chemistry. It approves the names of elements.

Question 6.
What is polyatomic ion? Give one example.
Answer:
A group of atoms carrying a charge is known as a polyatomic ion.
E.g., Ammonium — NH4–
Nitrate — NO3–

Question 12.
What are the rules for writing the symbol of an element?
Answer:
IUPAC → International Union of Pure and Applied Chemistry approves name of elements.

Symbols are the first one or two letters of the element’s name in English. The first letter of a symbol is always written as a capital letter (upper case) and the second letter as a small letter (lower case).
e.g., Hydrogen → H
Helium → He

Question 13.
Explain relative atomic mass and relative molecular mass.
Answer:
Relative atomic mass: It can be defined as the number of times one atom of given element is heavier than \(\frac {1}{2}\) th of the mass of an atom of carbon-12.

Relative Molecular Mass: It is defined as the number of times one molecule of a substance or given element is heavier than vyth of the mass of one atom of carbon-12.

Question 14.
The formula of carbon-dioxide is CO2. What information do you get from this formula?
Answer:

Question 15.
State 3 points of difference between an atom and an ion.
Answer:
Atom: 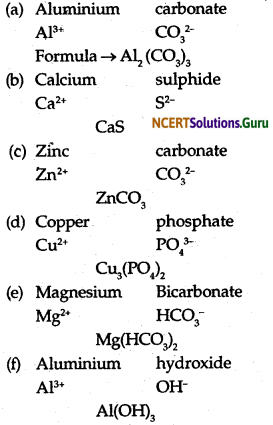 Question 21.
Analysis of a certain compound showed that 39.348 grams of it contained 0.883 grams of hydrogen, 10.497 grams of Carbon, and 27.968 grams of Oxygen. Calculate the empirical formula of the compound.
Answer:
First divide the amount by the atomic mass to get the number of moles of each kind of atom in the formula 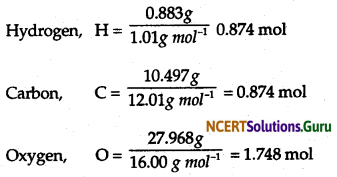 Analysis of the ratio shows that the first two are identicaland that the third is twice the other two. Therefore the ratio of H to C to O is 1 to 1 to 2. The empirical formula is HCO2.

(c) Polyatomic ions: When more than two atoms combine together and act like an atom with a charge on it is called polyatomic ion.
E.g., OH–, NO3–,NH4+

Question 3.
What is meant by atomic mass, gram atomic mass of an element? Why is the mass have different expressions i.e., ‘u’ and ‘g’?
Answer:
The atoms are very tiny and their individual mass cannot be calculated as it is negligible. Hence the mass of atoms is expressed in units with respect to a fixed standard. Initially hydrogen atom with mass 1 was taken as standard unit by Dalton. Later, it was replaced by oxygen atom (O = 16). But due to the isotopes the masses were found in fractions instead of whole number. Hence, carbon (C = 12) isotope was taken as standard unit and was universally accepted.