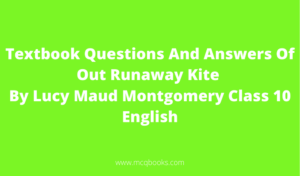 1. Choose the correct alternative to complete the following sentences:

a) The keeper of the Big Half Moon Lighthouse is

b) The family moved over to the mainland in

2. Fill in the chart with information from the text.

a) Name of the island

b) age of Claude

c) the game played by Claude and the narrator

3. State whether the following sentences are True or False. Provide sentences phrases/words in support of your answer.

i) People felt that Claude and the narrator were lonesome

S.S – “They said we must be lonesome over there, with no other children near us.”

ii) Claude and the narrator quarrelled

S.S – “Claude and I never quarreled”

iii) Nobody on the mainland had relations

S.S – “Everybody on the mainland had relations”

4. Choose the correct alternative to complete the following sentences:

a) In summer the Big Half Moon is always

b) Back on the island, Claude and the narrator made plenty of

c) the kite was patched with a

5. Complete the following sentences with information from the text:

i) A boy on the mainland showed Claude how to make kites.

ii) On the kite Claude pasted gold tinsel stars all over it and had written their names on it.

iii) Claude was standing with a bit of cord of the sailed away kite in his hand, looking foolish.

6. Fill in the chart with information from the text.

a) The narrator’s elbow went through the kite

When she was bringing the kite from the house, she tripped and fell over the rocks.

b) Claude and the narrator hurried to fix the kite.

They wanted to send the kite up before the wind had finished.

The wind was glorious

7. Choose the correct alternative to complete the following sentences:

a) A letter came for father after a

b) Father left home after quarrelling with his

8. Fill in the chart with information from the text.

a) Person who sent the letter

b) name of Aunt Esther’s mother

a) What did father find when he went back home years afterwards?

— When he went back home years afterwards he found his brother had passed away and he couldn’t find his sister.

b) Where did Aunt Esther live?

–Aunt Esther lived hundred of miles away in Inland.

–Aunt Esther turned pale and surprised when he found the kite patched with the same letter she had written to her brother earlier.

10. Change the following sentences into questions, as directed:

a) Shankha lives in Alipurduar. (Information question using ‘ where’)

— Where does Shankha live?

b) They have gone to a picnic. (Interrogative sentence using ‘have’)

— Have they gone to a picnic?

c) I went to school yesterday. (Simple question using ‘did’)

— Did I go to school yesterday?

— Which class does Tia study in?

11. Suppose your bicycle has a sudden tyre puncture on your way to school. You have taken the cycle to a repair shop. Write an imaginary dialogue (within 100 words) between the shopkeeper and you.

Uncle: How are you? Good morning

I: I Am good and you? My brother came here yesterday I think

Uncle: I am also good. Yes, your brother came yesterday and repaired few parts in his cycle and asked me if I have any new collections of the cycle. He was quite impressed with one of the cycles.

I: This boy loves to collect cycles, total wastage of money.

Uncle: But why are you here do you face any problem with your vehicle or need a new one.

I: no, uncle my bicycle is working great now I don’t need a new one but today I got a puncture in my tyre will you see it.

Uncle: yes of course but how did it happen.

I: I was going to college and few glass pieces made the puncture.

Uncle: ok I will repair it within 10 minutes.

I: thank you and how much will you take.

Uncle: give me 20 rupees

I: ok repair it I will come here by 5 pm and that time I will pay you. Bye.

Crow sitting on a tree —- piece of meat on its beak —– fox passing under the tree — wants the meat — asks the crow to sing — crow keeps under its feet and sings —– fooled, fox leaves.

One day in a forest a crow was singing and collecting food for him. He was sitting near the river and doing his job. While collecting food he got tired and sat one tree by taking a piece of meat on its beak. He was sitting and relaxing and at that time a fox was passing under the tree and saw the crow with the meat. He was hungry and wanted that meat. He tries to be clever as he knows that the crow will not give the meat. He applies a trick and asks the crow to sing a song because if he sings he has to open his beak and the meat would fall and the fox would collect it. But the crow too was clever he knew that the fox is trying to be clever as he wants the meat. So he keeps the meat under his feet and starts singing. The fox became disappointed and was fooled by the crow. The fooled fox left the place and the hope of eating the meat. The crow giving a wicked smile started enjoying his meal.