These NCERT Solutions for Class 9 Social Science Economics Chapter 2 People as Resource Questions and Answers are prepared by our highly skilled subject experts to help students while preparing for their exams.

Question 1.
Looking at the photograph can you explain how a doctor, a teacher, engineer, and a tailor are an asset to the economy? 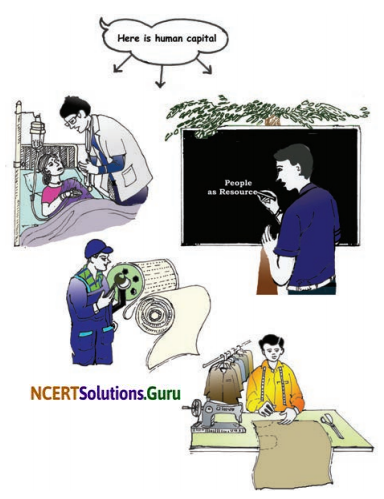 Answer:
These people provide different services to the people of the country. A doctor treats the patients, a teacher gives education to the children and plays a valuable role in moulding them into good citizens, an engineer, a tailor, and many other people in different professions serve the society and the country in their own way. Therefore, they are an asset to the economy of the nation.

Question 2.
Do you notice any difference between the two friends? What are those?
Answer:
Story of Sakal
There were two friends Vilas and Sakal living in the same village Semapur. Sakal was a twelve-year-old boy. His mother Sheela looked after domestic chores. His father Buta Chaudhary worked in an agricultural field. Sakal helped his mother with domestic chores. He also looked after his younger brother Jeetu and sister Seetu. His uncle Shyam had passed the matriculation examination, but, was sitting idle in the house as he had no job. Buta and Sheela were eager to teach Sakal. They forced him to join the village school which he soon joined.

He started studying and completed his higher secondary examination. His father persuaded him to continue his studies. He raised a loan for Sakal to study a vocational course in computers. Sakal was meritorious and interested in studies from the beginning. With great vigour and enthusiasm, he completed his course. After some time he got a job in a private firm. He even designed a new kind of software. This software helped him increase the sale of the firm. His boss acknowledged his services and rewarded him with a promotion.

Story of Vilas
Vilas was an eleven-year-old boy residing in the same village as Sakal. Vilas’s father Mahesh was a fisherman. His father passed away when he was only two years old. His mother Geeta sold fish to earn money to feed the family. She bought fish from the landowner’s pond and sold it in the nearby mandi. She could earn only Rs 150 a day by selling fish. Vilas became a patient of arthritis. His mother could not afford to take him to the doctor. He could not go to school either. He was not interested in studies. He helped his mother in cooking and also looked after his younger brother Mohan. After some time his mother fell sick and there was no one to look after her. There was no one in the family to support them. Vilas, too, was forced to sell fish in the same village. He like his mother earned only a meager income.

Question 3.
Study the graph given below and answer the following questions:

Source: Economic Survey, 2012.
1. Has the literacy rates of the population increased since 1951?
2. In which year India has the highest literacy rates?
3. Why literacy rate is high among the males of India?
4. Why are women less educated than men?
5. How would you calculate literacy in India?
6. What is your projection about India’s literacy rate in 2020?
Answer:
1. Yes, the literacy rates of the population have increased since 1951. It was 18% in 1951. The figure rose to 74% in 2010-2011.
2. India has the highest literacy rate in 2011.
3. It is because, in our country, men’s education is considered more important than women’s.
4. India is a country where males dominate. They are given all privileges and are always seen at the forefront. Hence, their education is considered of utmost importance whereas women’s education is undermined. This is the reason why women are less educated than men.
5. The literacy rate can be calculated on the basis of the number of literate people divided by the population multiplied by 100. This formula is expressed in the following way;
Literacy Rate = \(\frac{\text { Number of literate people in India }}{\text { Population of India } \times 100}\)
6. India’s literacy rate would be 80% by 2020.

Question 4.
Discuss this table given below in the classroom and answer the following questions.
1. Is the increase in the number of colleges adequate to admit the increasing number of students?
2. Do you think we should have more Universities?
3. What is the increase noticed among the teachers in the year 1998-99?
4. What is your idea about future Colleges and Universities?
Table 1: Number of Institutions of Higher Education, Enrolment and Faculty

Source: UGC Annual Report 1996-97 and 1998-99 and Selected Educational Statistics, Ministry of HRD, Draft Report of Higher Educational for 11th Five Year Plan, the working group on Economic Survey 2011-12, 2012-13.
Answer:
1. No, the increase in the number of colleges is not adequate to admit the increasing number of students because the number of students is increasing at a faster rate compared to the colleges being established in the country.
2. Yes, there should have more Universities to keep pace with the increasing number of students.
3. There was an increase of 21 thousand teachers in the year 1998-99 compared to 1996-97.
4. Future Colleges and Universities should focus on increasing access, quality, adoption of state-specific curriculum modification, vocationalisation, and networking on the use of information technology.

Question 5.
Study the table given below and answer the following questions:
Table 2: Health infrastructure over the years 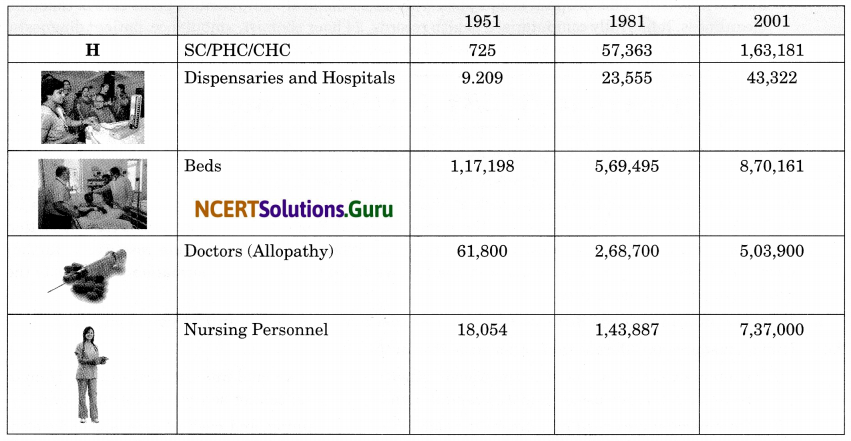 3. For a country like India where the population is so huge, the increase in the number of doctors and nurses is not adequate. We need more number of them.

4. Facilities that should be provided in a hospital are:

5. Recently I visited Max Super Speciality Hospital located in Vaishali, Ghaziabad. It is India’s first truly integrated healthcare system, providing three levels of clinical service e.g. primary, secondary, and tertiary within one system. It has all the features of a world-class hospital. It has a team of highly qualified and trained doctors, nurses, and patient care personnel to provide the highest standard of care. This hospital is equipped with the latest medical equipment. Great care is taken on cleanliness. It has fully computerized health records. 24-hour chemist, ambulance, patient diagnostic, and emergency services are available here. The hospital is centrally air-conditioned.

Question 1.
What do you understand by ‘people as a resource?
Answer:
‘People as a resource’ is a way of referring to a country’s working people in terms of their existing productive skills and abilities. If we look at the population from a productive aspect, it emphasizes its ability to contribute to the creation of the Gross National Product. Like other resources population also is a resource—which is called a human resource. When the existing human resource is further developed by becoming more educated and healthy, we call it human capital formation that adds to the productive power of the country.

Question 3.
What is the role of education in human capital formation?
Answer:
Education plays a very significant role in human capital formation. It is an important input for the growth of an individual. It enables humans to realize their full potential and achieve success in life in the form of higher incomes through better jobs and higher productivity. Education helps individuals to make better use of the economic opportunities available before them.

Question 4.
What is the role of health in human capital formation?
Answer:
Not only education but health also plays a vital role in human capital formation. The health of a person helps him to realize his potential and the ability to fight illness. A healthy person can do the work in a more effective manner. He or she can contribute to the growth and development of the economy by doing productive work. On the contrary, an unhealthy person becomes a liability for the family and society. So health is an indispensable basis for realizing one’s well-being. Our government has been very serious on this point. The improvement in the health status of the population has been the priority of the country.

Question 5.
What part does health play in the individual’s working life?
Answer:
An individual’s working life is directly associated with his or her health. If he or she is healthy, he or she will work enthusiastically and efficiently. If not, doing work will be a burden for him or her. In that case, no firm or organization will induce to employ him or her. So health should be given priority because only a healthy person can become an asset to society and the nation.

Question 8.
Why are women employed in low-paid work?
Answer:

Question 9.
How will you explain the term unemployment?
Answer:
The state of being without any work both for an educated and uneducated person, for earning one’s livelihood is meant by unemployment. Unemployment is said to exist when people who are willing to work at the going wages cannot final jobs.

Question 11.
Why is educated unemployed, a peculiar problem of India?
Answer:

Question 12.
In which field do you think India can build the maximum employment opportunity?
Answer:
India can build the maximum employment opportunity in the tertiary sector, also called the service sector. This sector in India employs many different kinds of people. There are a number of services such as biotechnology, information technology, etc. that employ highly skilled and educated workers. At the same time, there are a very large number of workers engaged in services such as small shopkeepers, repairpersons, transport persons, etc.

Question 14.
Can you imagine some village that initially had no job opportunities but later came up with many?
Answer:
1. Ratanpura was a very backward village a few decades ago. The only occupation of the villagers was agriculture which was dependent on rainfall. If rainfall was sufficient, there was no problem but if it was poor, the villagers would face problems because there were no other job opportunities.

2. Then electricity came there which changed the system of irrigation. People could now irrigate much larger areas more effectively with the help of electric-run tube wells. They could now grow more than one crop in a year and get work almost all the year.

3. By and by small-scale industries were set up which opened the door of employment. These industries provided both skilled and unskilled jobs to the village people.

4. With the passage of time people became aware of education and acknowledged the government for the need for schools in the village. The government set up a primary and a secondary school where village people got an education which ultimately enabled them to find jobs outside the village.

5. Then computer centers were set up which opened the door of vocational courses to the young enthusiastic villagers. These villagers after completing the course got jobs in private firms.

Question 15.
Which capital would you consider the best—land, labour, physical capital, and human capital? Why?
Answer:
Land, labour, physical capital, and human capital—all play important roles in the growth of an economy. All these are resources and we cannot undermine the value of one over the other. But it is also a fact that human capital is the best of all because human resources can make use of land and capital. It is noteworthy that land and capital cannot become useful on their own. They can be utilized only by humans. If humans do not make these resources usable they would remain unutilized. This very fact establishes the superiority of human capital over others.

Investment in human resources through education and medical care can give high rates of return in the future. Several years of education adds to the quality of labor. This enhances total productivity which further adds to the growth of the economy. Countries like Japan are rich and developed in spite of not having natural resources. The reason is that these countries have invested in human resources.