These NCERT Solutions for Class 9 Science Chapter 8 Motion Questions and Answers are prepared by our highly skilled subject experts to help students while preparing for their exams.

Consider the following situation. A man is walking in a square park of length 20 m (as shown in the following figure). He starts walking from point A and after moving along all the corners of the park (point B, C, D), he again comes back to the same point, i.e., A.

In this case, the total distance covered by the man is 20 m + 20 m + 20 + 20 m = 80 m.
However, his displacement is zero because the shortest distance between his initial and final position is zero. 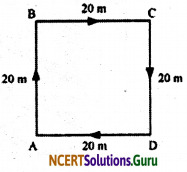 That means, after 2 min 20 s, the farmer will be at the opposite end of the starting point.
Now, there can be two extreme cases.

Question 3.
Which of the following is true for displacement?
(a) It cannot be zero.
(b) Its magnitude is greater than the distance travelled by the object.
Answer:
(a) Not true
Displacement can become zero when the initial and final position of the object is the same.

Question 7.
What does the path of an object look like when it is in uniform motion?
Answer:
An object having uniform motion has a straight line path.

(ii) A body is said to have non-uniform acceleration if it travels in a straight path in such a way that its velocity changes at a non-uniform rate, i.e., the velocity of a body increases or decreases in unequal amounts in an equal interval of time. 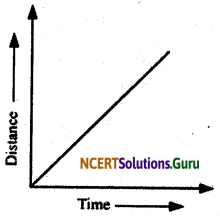 The distance-time graph for non-uniform motion of an object is a curved line (as shown in the given figure). 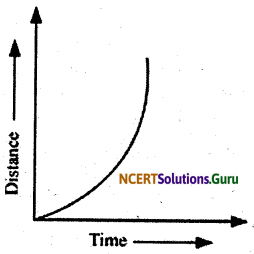 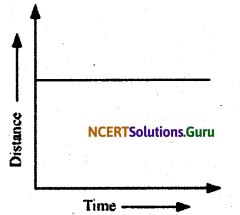 A straight line parallel to the x-axis in a distance-time graph indicates that with a change in time, there is no change in the position of the object. Thus, the object is at rest.

Question 14.
What can you say about the motion of an object if its speed-time graph is a straight line parallel to the time axis?
Answer:
Object is moving uniformly. 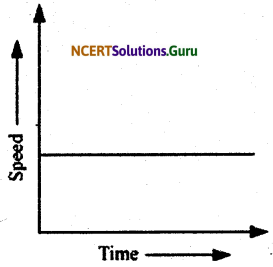 Question 15.
What is the quantity which is measured by the area occupied below the velocity-time graph?
Answer:
Distance 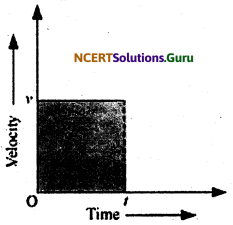 The graph shows the velocity time graph of a uniformly moving body.
Let the velocity of the body at time (t) be v.
Area of the shaded region = length × breath
Where,
Length = t
Breath = v
Area = vt = velocity × time …….. (i)
We know,
Velocity = \(\frac{\text { Displacement }}{\text { Time }}\)
∴ Displacement = Velocity × Time, ……… (ii)
From equations (i) and (ii),
Area = Displacement
Hence, the area occupied below the velocity-time graph measures the displacement covered by the body.

Question 10.
A driver of a car travelling at 52 km h-1 applies the brakes and accelerates uniformly in the opposite direction. The car stops in 5 s. Another driver going at 3 km h-1 in another car applies his brakes slowly and stops in 10 s. On the same graph paper, plot the speed versus time graphs for the two cars. Which of the two cars travelled farther after the brakes were applied?
Answer:
Case A:
Initial speed of the car, u1 = 52 km/h = 14.4 m/s
Time taken to stop the car, t1 = 5 s
Final speed of the car becomes zero after 5 s of application of brakes. 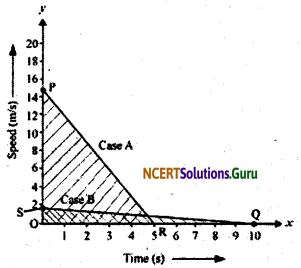 Question 11.
Fig 8.11 shows the distance-time graph of three objects A, B and C. Study the graph and answer the following questions: 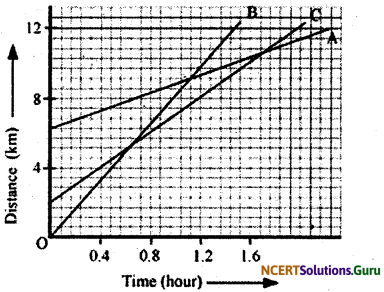 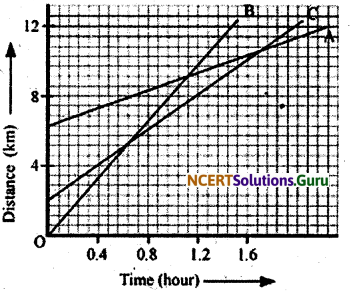 (b) AD three objects A, B and C never meet at a single point. Thus, they were never at the same point on road. 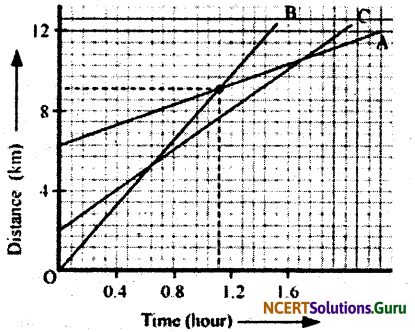 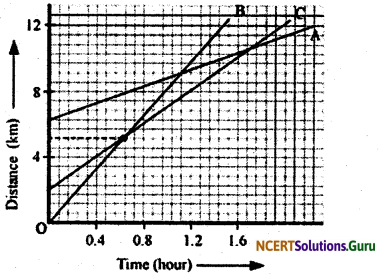 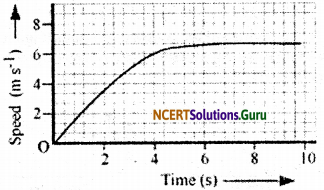 (a) Find out how far the car travels in the first 4 seconds. Shade the area on the graph that represents the distance travelled by the car during the period.
(b) Which part of the graph represents uniform motion of the car?
Answer:
(a) 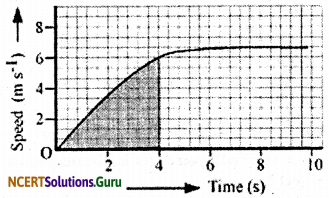 The shaded area which is equal to represents the distance travelled by the car in the first 4 s. 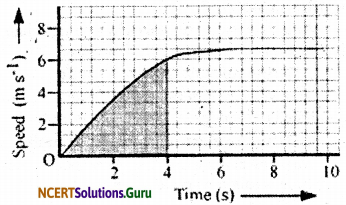 The part of the graph in red colour between time 6 s to 10 s represents uniform motion of the car.

(b) Possible:
When a car is moving in a circular track, its acceleration is perpendicular to its direction.

Question 2.
If the distance-time graph of a body ¡s parabola, then its motion is
(a) Uniform
(b) Non-uniform
(d) Body’s in rest
(d) Body is in vibratory motion
Answer:
(a) Uniform

Question 11.
Which of the following figures (Fig.) represents uniform motion of a moving object correctly? 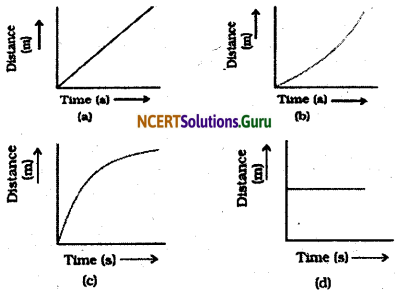 Question 12.
Which of the following is a vector quantity?
(a) Speed
(b) Distance
(c) Velocity
(d) energy
Answer:
(a) Speed

Question 3.
Define velocity. Give its S.I. unit.
Answer:
Velocity is defined as the displacement produced per unit time. It’s S.I. unit is ms-1. 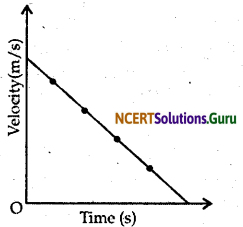 Question 7.
The graph of two friends A and B are shown in the figure 8.13 below: 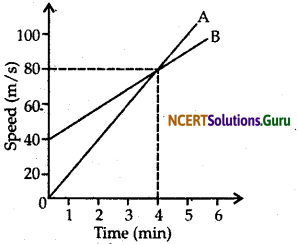 (a) Which of the two friends is moving faster?
(b) Where and when will they meet?
Answer:
(a) A is moving faster than B because of its greater slope.
(b) The two will meet after 4 minutes at distance of 80 meters.

Question 9.
Draw a graph describing the osillatory motion of a body.
Answer: 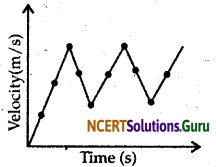 Question 1.
When is a body said to be in motion? Explain with an example that the motion of a body is relative to the position of other objects.
Answer:
A body is said to be in motion if its position continues to change with the surroundings. Motion is relative i.e. an object/ body may appeard to be moving to some but not others. Such as two students travelling in a bus while sitting on same seat. For people outside they are in motion but with respect to each other, the two friends are in state of rest.

The differences between distance and displacements are:

Question 3.
A bus starts from point A and goes to point B after travelling 60 km on a straight road and then returns to point A.
(i) What is the total distance covered by the bus?
(ii) What is its displacement?
Answer:
(i) Total distance travelled by bus from A to B and back to point A, then
AB + BA = 60m + 60m = 120m
(ii) The net displacement is zero because the final position coincides with initial position.

Question 4.
What do you mean by uniform and non-uniform acceleration?
Answer:
Uniform motion: When a body covers equal distance in equal interval of time, how small time interval may be, the motion is called uniform motion.

If a body covers 60 km in an hour moving with a uniform motion, then it would cover 30 km in half hour and 15 km in 15 minutes.

Question 8.
What do you mean by positive and negative acceleration? Give examples.
Answer:
When the acceleration of a body increases with time, it is called positive aceleration such as the free falling body experiences an increase in its velocity by 9.8 m/s, every second.

When the acceleration of a body decreases with time, it is called negative acceleration such as the stopping of car after application of breakes in time t, covering a distance of s metres.

(b) When a body is moving in a circular path with constant speed, its direction changes at every point hence, due to change in its direction, its velocity also changes simultaneously.

(d) When a train starts moving from a railway station, it increases its speed by unequal amount in equal interval of time till it attains the maximum speed.

Question 10.
What is the importance of graphs in daily life.
Answer:
A graph provides a convenient method to represent pictorially the basic information about an event. A graph can be bar graph, line graph or a pie chart. These graphs are used in:

Question 11.
Draw the distance-time graph of a uniform motion. How will you calculate the speed of the object from this graph. 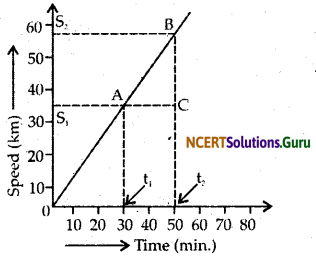 Answer:
Tire given graph is the distance time graph. To determine the speed of object between A and B, draw,a line from A, parallel to X-axis and an another line parallel to speed-axis from point B. These two lines meet at point C and form a triangle ABC. In ΔDBC, AC denotes the time interval and BC denotes the distance travelled. Hence,
Speed (V) = \(\frac{\mathrm{BC}}{\mathrm{AC}}=\frac{S_{2}-S_{1}}{t_{2}-t_{1}}\) Sloped line A

Question 12.
The time of arrival and departure of a train at three station A, B and C and their distances from station A are given the table below. Plot the distance for graph for the motion of the tain assuming that its motion between the onation is uniform.

Answer:
The distance timetable for the motion of the train 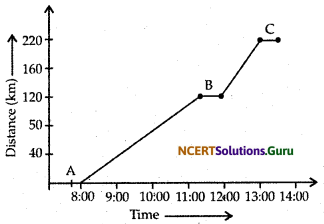 Question 13.
Megha and his sister Anu goes to the school on bicycle. Both of them start at the same time but take different time to reach the school although they follow the same route. Table below shows the distance moved by both at different instant of time, plot the distance-time graph for their motion on the same graph and interpret the graph. 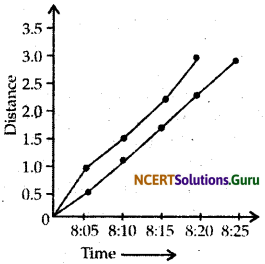 The distance-time gaph shows both are moving with non-uniform motion. The average speed of Megha is greater than that of Anu.

Question 16.
Usha swims in a 90 m long swimming pool. She covers 180 m in one minute swimming from one end of pool and back to the pool along a straight path. Find the average speed and average velocity?
Answer:
Total distance covered by Usha in one minium = 180 m. 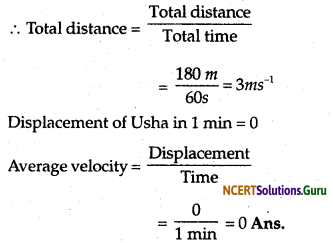 Question 19.
In a long distance race, the athletes were expected to take four rounds of the track such that the line of finish was same as the line of start. The length of track is 200 m.
(a) Calculate the total distance covered by the athletes.
(b) Displacement of athletes when they touch the finishing line.
(c) Is the motion of athletes uniform or non-uniform?
Answer:
(a) In four rounds, total distance covered
= 4 × length of track = 4 × 200 = 800 m
(b) Displacement upon touching the finishing line would be zero as track is a circular track.
(c) Motion of athletes would be non-uniform as they are not completing the race at the same time i.e. distance covered by them in equal interval of time is not equal.

Question 20.
A circular track has a circumference of 314 m with AB as one of its diameter. A cyclist traveels from A to B along the circular path in 30s. Find
(a) Speed of cyclist.
(b) Displacement of cyclist.

Question 30.
Draw a velocity time graph for a uniformly accelerated motion. How will you determine the distance covered by a body in a given interval of time using the graph.
Answer: 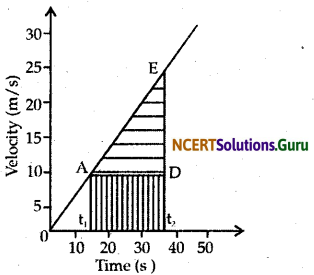 The velocity time graph for uniformly accelerated motion is a straight line curve passing through the origin and makes an angle with time axis. Using the graph, the distance travelled by a body between any given time interval can eas easily be determined.

To determine the distance travelled between the time interval t1 and t2, perpendicular are drawn from point t1 and t2 on the graph.
Distance travelled = Velocity × time
= AC × CD = 40 × (t2 – t1) km
= Area of rectangle ABCD 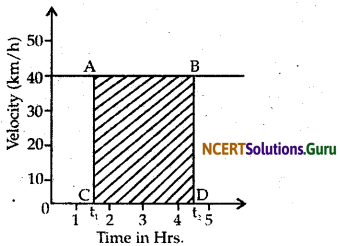 Question 3.
Derive the relation s = ut + 1at2 from velocity-time graph of a uniform accelerated motion. 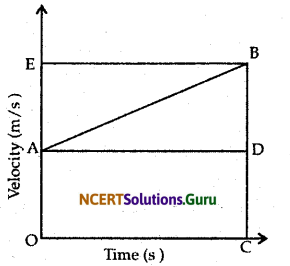 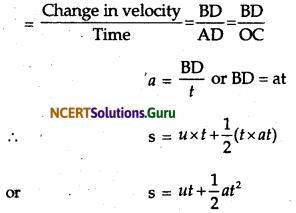 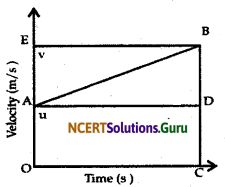 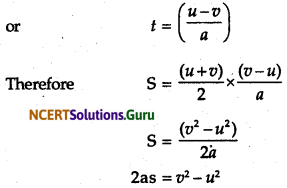