These NCERT Solutions for Class 9 Maths Chapter 5 Introduction to Euclid’s Geometry Ex 5.1 Questions and Answers are prepared by our highly skilled subject experts.

Question 1.
Which of the following statements are true and which are false? Give reasons for your answers?
(i) Only one line can pass through a single point.
(ii) There is an infinite number of lines which pass through two distinct points.
(iii) A terminated line can be produced indefinitely on both sides.
(iv) If two circles are equal then their radii are equal.
(v) In fig. 5.9, if AB = PQ and PQ = XY, then AB = XY

Solution:
(i) False, from one point an infinite number of lines can pass.
(ii) False, as from two distinct points only one line can pass through them.
(iii) True, as you can see in the figure.

(iv) True, if two circles are equal then their center and circumference will coincide. Therefore, radii will be equal.
(v) True. As AB = PQ and PQ = XY

Question 2.
Give a definition for each of the following terms. Are there other terms that need to be defined first? What are they, and how might you define them?
(i) Parallel lines
(ii) Perpendicular lines
(iii) Line Segment
(iv) Radius of a circle
(v) Square
Solution:
(i) Parallel lines: If two lines are at a constant distance from each other and don’t meet at any point are called parallel lines. 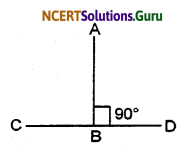 (iii) Line Segment: A straight line drawn from anyone point to any other point.

(iv) Radius: Area bounded by a line whose one en 1 is fixed and completes a circle.

(v) Square: A square is a rectangle with a pair of consecutive sides that are equal.

Question 3.
Consider two ‘Postulates’ given below:
(i) Given any two distinct points A and B, there exist a third point C which is in between A and B.
(ii) There exist at least three points that are not on the same line. Do these postulates contain any undefined terms? Are these postulates consistent? Do they follow Euclid’s Postulates? Explain?
Solution:
It does have an undefined term like line segment between two points, Third point is on the line or not.
Yes, they are consistent as these are two different situations in the
(i) the third point C lie on the line segment made by joining points A and B points.
(ii) The third point does not lie on the line segment made by joining the A and B points.
No, these postulates do not follow Eudid’s postulates. Actually, they are axiom 5.1.

From equation (i) and (ii)
AC = AD and CB = DB
But this will be possible only when D lies on point C.
So what we have assumed that there are two midpoints is wrong.

Question 7.
Why is Axiom 5 in the list of Euclid’s axioms considered a ‘Universal Truth’?
Solution:
Axiom 5: The whole is greater than the part.
As we can see in this figure.