Question 1.
How will you describe the position of a table lamp on your study table to another person?
Solution:

Question 2.
(Street Plan): A city has two main roads meeting at the center of the city. These two roads are along the North-South direction and East-West direction. All other streets of the city-run parallel to main roads and are 200 m apart There are about 5 streets in each direction. Using 1 cm = 200 m, draw the model of the city in your notebook. Represent roads/streets by single lines.
There are many cross streets in your modal. A particular cross-street is made by two streets, one running in the North-South direction and another in the East-West direction. Each cross street is referred to in the following manner. If the 2nd street running in the North-South direction and 5lh in the East-West direction meet at some crossing then we will call this cross-street (2, 5). Using this convention, find
(i) How many cross-streets can be referred to as (4, 3)
(ii) How many cross-streets can be referred to as (3, 4).
Solution:
According to the question street plan drawn as 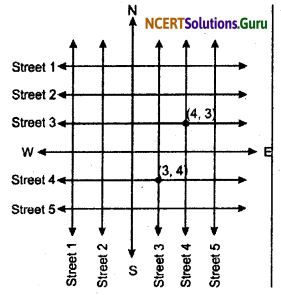 Both the cross streets are marked in the above figure. They are only one found because of the two reference lines we have used for locating them.