These NCERT Solutions for Class 7 Science Chapter 7 Weather, Climate and Adaptations of Animals of Climate Questions and Answers are prepared by our highly skilled subject experts to help students while preparing for their exams.

Question 2.
When are the maximum and minimum temperatures likely to occur during the day?
Answer:
The temperature is minimum in the morning and maximum at the noon.

Question 5.
Which of the two changes frequently, weather or climate?
Answer:
Weather

Question 6.
Following are some of the characteristics of animals:
(i) Diets heavy on fruits
(ii) White fur
(iii) Need to migrate
(iv) Loud voice
(v) Sticky pads on feet
(vi) Layer of fat under skin
(vii) Wide and large paws
(viii) Bright colours
(ix) Strong tails
(x) Long and large beak
For each characteristic indicate whether it is adaptation for tropical rainforests or polar regions. Do you think that some of these characteristics can be adapted for both regions?
Answer:

Yes, some adaptations like loud voice, wide and large paws, strong tails, long and large beak, etc., can be adapted for both regions.

Hence, if polar bear comes to tropical region, it will feel extreme heat and if monkey comes to polar region, it may die due to extreme cold. Therefore, certain animals live only in particular climatic conditions. 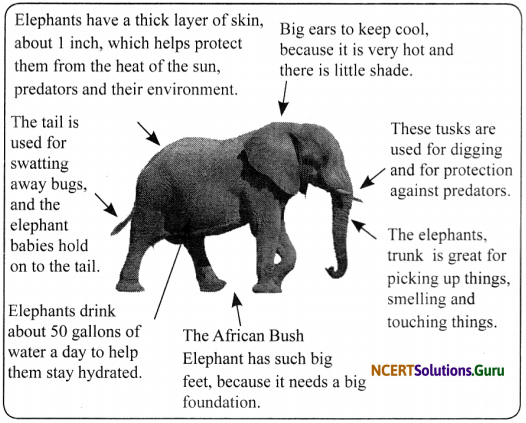 Question 2.
Collect information about the Indian Meteorological Department. If possible, visit its website:
http//www.imd.gov.in.
Write a brief report about the things this department does.
Answer:
Meteorology focuses on the lower parts of the atmosphere, primarily the troposphere, where most weather conditions take place. Meteorologists use scientific principles to observe, explain and forecast our weather. The Indian Meteorological Department (IMD), also referred to as the Met Department, is an agency of the Ministry of Earth Sciences of the Government of India.

Functions of Meteorological department: It performs the study and observation of:

On the basis of the study and the observations, they predict about things such as what would be the weather tomorrow, when monsoon is expected or when cyclone, hurricane, tornado, etc., are expected. 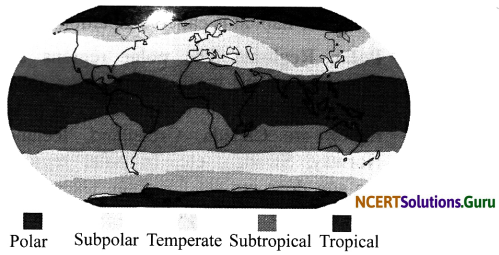 Adaptations of some animals of tropical rainforests are describe below:
i. Red-eyed frog: It has sticky pads on its feet to help it climb on trees on which it lives.
ii. Monkeys: They have long tails, for grasping the branches of trees on which they live. Their hands and feet help them in holding branches.
iii. Toucan: It possesses a long, large beak that helps to reach the fruits on branches that are too weak to bear its weight. 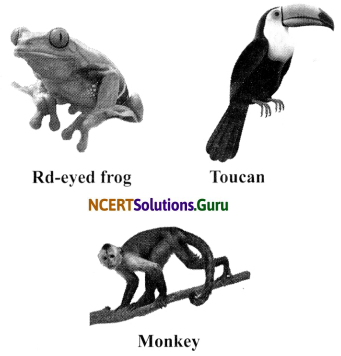 iv. Lions and Tigers: They have thick skin, sensitive hearing, sharp eyesight and a skin colour to camouflage in the environment and protect them from predators.

v. Lion-tailed Macaque (Beared Ape): It lives in western ghats. It has a silver-white mane which surrounds the head from the cheeks down to its chin. It is a good climber and lives on trees. It feeds of fruits, seeds, leaves, stems, flowers and buds. It also feeds on insects under tree bark and rarely comes down on the ground as it finds sufficient food on trees.
vi. Elephant: It uses its trunk as nose and hence, it has a strong sense of smell. Its tusks are modified teeth with which it can tear the bark of trees to eat. It has large ears that helps it to hear ever the softest sounds and keep cool in hot weather. 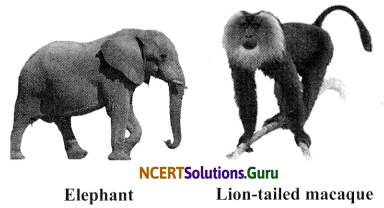 Question 1.
Define weather.
Answer:
It is the day-to-day condition of the atmosphere at a particular time and place.

Question 2.
Define climate.
Answer:
The average weather condition of a place over a long period of time is called the climate of that place.

Question 3.
What is adaptation?
Answer:
The presence of specific body features or certain habits which enable an animal or a plant to live and survive in a particular habitat is called adaptation.

Question 4.
What is humidity?
Answer:
Humidity is a measure of the moisture content in the air.

Question 1.
What is rain gauge?
Answer:
Rainfall is measured by an instrument called the rain gauge. It is basically a measuring cylinder with a funnel on top to collect rainwater.

Question 2.
What are the characteristics of the polar regions?
Answer:
The polar regions are present in an extreme climate. These regions are covered with snow and it is very cold for most part of the year. The sun does not set for six months and does not rise for other six months. In winter, the temperature can be as low as -37°C.

Question 4.
Write some of the adaptations of animals found in tropical rainforests.
Answer:
Some adaptations of animals living in the tropical rainforests include living on the trees, development of strong tails, long and large beaks, bright colours, loud voice, diet of fruits, sensitive hearing, sharp eyesight, thick skin, ability to camouflage in order to protect themselves from predators, etc.

Question 5.
How do migratory birds find their way?
Answer:
It seems that these birds have a built-in sense of direction and know in which direction to travel. Some birds probably use landmarks to guide them. Many birds may be guided by the sun during the day and stars at night. There is some evidence that birds may use the magnetic field of the earth to find directions.

Question 7.
What are the various body features which make penguin a good swimmer?
Answer:
Their body is streamlined and their wings have become modified into flippers. They have webbed feet. These features help penguins in swimming.

Question 9.
What is migration?
Answer:
Migration refers to the movement of organisms from one place to another to escape the harsh, climatic conditions. There are many types of birds found in polar regions. They fly to the warm regions during winter to survive. Long distance travel in search of favourable climate is called migration.

Question 10.
How does the sun cause the changes in the weather?
Answer:
Sun is a huge sphere of hot gases burning at a very high temperature. The distance of the sun from us is very large. Even then, the energy sent out by the sun is very large in amount. Hence, sun is the primary source of energy that causes changes in weather. Energy absorbed and reflected by the earth’s surface oceans and atmosphere play important roles in determining the weather at any place.

Question 11.
Why is it cooler farther away from the equator?
Answer:
As we move forward towards the poles, the sun rays fall in a slanting angle on the land and have more and more areas to heat up. So, the heat is spread out over a larger area and it becomes colder and colder with increasing latitude. Hence, it is cooler farther away from the equator. 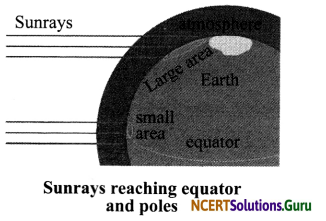 Question 12.
How animals living in the cold places protect themselves from cold?
Answer:
The animals which live in the cold places like whales, seals and penguins have thick skin which protects them from cold. They also have thick fur. They also have a deposit of fat layer called blubber under their skin which insulates their body from severe cold.

Question 1.
Explain weather and its elements.
Answer:
The day-to-day conditions of atmosphere at a particular place is called weather. The weather can be comfortable or can be too hot too or cold. The various elements of weather are: temperature, humidity, rainfall, wind speed, etc.

a. Temperature: Temperature depends upon the duration of sunshine. During the summer season, the duration of the sunshine is longer. Due to this, the temperature is high in summer. The day temperature is minimum in the morning and maximum at noon.
b. Humidity: Humidity is the amount of moisture present in the air. It is generally measured in percentage. Humidity is generally at the highest level during the rainy season.
c. Rainfall: Amount of rainfall is measured in terms of mm. For this, an apparatus called rain gauge is used.
d. Wind-speed: Speed of wind also affects the condition of weather. 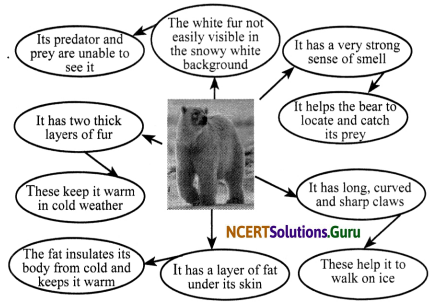 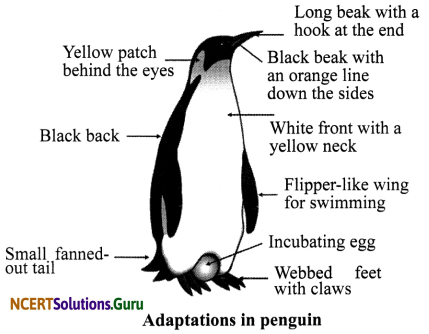 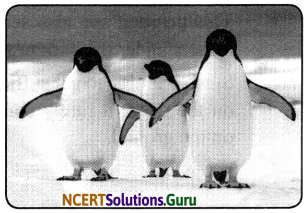 a. Identify the animals shown in the picture.
b. What does this picture show?
c. What is the need of condition illustrated?
Answer:
a. The given picture is of penguins.
b. This picture shows penguins huddling together.
c. Penguins huddle together to keep them warm.

Question 2.
Observe the following picture and answer the questions that follow: 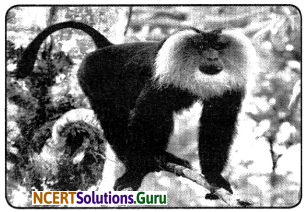 a. Identify the animal in the given picture.
b. Name the habitat of this animal.
c. Write the features of this animal.
Answer:
a. The given picture is lion-tailed macaque.
b. It lives in tropical rainforests and in western ghats in India.
c. The hand and feet of lion-tailed macaque have very good grip which helps it in leaping between the branches. It feeds mainly on fruits on the trees. It also eats seeds, leaves, stems, flowers and buds.