These NCERT Solutions for Class 7 Science Chapter 6 Physical and Chemical Changes Questions and Answers are prepared by our highly skilled subject experts to help students while preparing for their exams.

Question 3.
Fill in the blanks in the following statements:
a. When carbon dioxide is passed through lime water, it turns milky due to the formation of …………………
b. The chemical name of baking soda is …………………
c. Two methods by which rusting of iron can be prevented are ………………… and …………………
d. Changes in which only ………………… properties of a substance change are called physical changes.
e. Changes in which new substances are formed are called ………………… changes.
Answer:
a. calcium carbonate
b. sodium hydrogen carbonate
c. painting or greasing, galvanisation
d. physical
e. chemical

Question 6.
How would you show that setting of curd is a chemical change?
Answer:
The curd is formed from milk. Both the curd and the milk have different properties. Also, once the curd is formed, it cannot be reversed back into milk. So, there is a formation of new substance with different properties and also it is an irreversible process. Hence, setting of curd is a chemical change.

Question 7.
Explain why burning of wood and cutting it into small pieces are considered as two different types of changes.
Answer:
Burning of wood is a chemical change because in burning, new substances are formed and heat and light are produced. Wood + Oxygen → Carbon dioxide + Charcoal + Heat + Light
But cutting it into small pieces is a physical change because no new substance is formed in this. We can only reduce the size of wood by cutting which is a physical property. 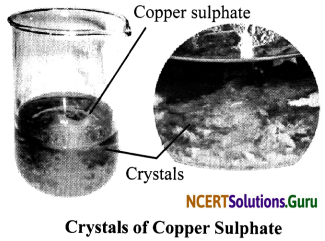 Question 1.
Describe two changes that are harmful. Explain why you consider them harmful. How can you prevent them?
Hint:
Two changes which are harmful are:
a. Rusting of iron: When iron is left exposed to air it reacts with oxygen and water in the air to form a powdery substance called rust.
Rusting of iron is harmful as rust slowly eats away the iron leading to its considerable loss. Rusting can be prevented by oiling, polishing and painting.

b. Spoilage of food grains: Food grains get spoiled over a period of time. This causes a loss to us. It can prevented in the following ways:

Question 2.
Take three glass bottles with wide mouths. Label them A, B, C. Fill about half of bottle A with ordinary tap water. Fill bottle B with water which has been boiled for several minutes, to the same level as in A. In bottle C, take the same boiled water and of the same amount as in other bottles. In each bottle put a few similar iron nails so that they are completely underwater. Add a teaspoonful of cooking oil to the water in bottle C so that it forms a film on its surface. Put the bottles away for a few days. Take out nails from each bottle and observe them. Explain your observations.

Hint:
In test tube B: Formation of rust will take place since air from the atmosphere will dissolve in boiled water as it is uncovered.
In test tube C: No rust formation will occur since only water is present. No air is present in it as oil cuts off supply of air.
By the above observations we conclude that both air and water are essential for rusting. If out of these one is missing, rusting will not take place.

Question 3.
Prepare crystals of alum.
Hint:
Prepare a supersaturated solution of alum in a beaker by dissolving the powdered alum in water. For this, take a beaker half filled with water on a stand and heat it till it starts boiling. Add alum slowly to this solution. Keep on adding alum until no more alum can be dissolved. Filter the warm solution into another beaker. Now keep the filtered solution in a water bath containing ice. Do not disturb the solution. Large crystals of solid alum will be formed at the base of beaker when solution cools down.

Question 4.
Collect information about the type of fuels used for cooking in your area. Discuss with your teacher/parents/ others which fuels are less polluting and why.
Hint:
The following types of fuels are used in our area:
a. Solid fuels: coal, dung cake, wood, etc.
b. Liquid fuel: Kerosene oil.
c. Gaseous fuel: LPG. LPG is a less polluting fuel.

Objective: To study the change in state of ice.
Materials Required: A piece of ice, glass/ plastic tumbler.
Procedure:

Observations: On heating the ice, it is converted into water and on freezing, it again changes into ice.
Conclusion: In this activity, solid changes into liquid and liquid changes back into solid. Thus, there is no change in the properties of water.

Objective: To study the change in state of water. Materials required: Water, beaker, Bunsen burner and a pan with handle.
Procedure: 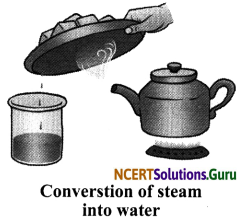 Observations: When the water heated, it is converted into steam. On cooling down, the steam it converted into water again.
Conclusion: In this activity, there is no change in the properties of water. No new substance is formed. So, the boiling of water to form steam is a physical change.

Chemical Change: These changes are the changes in which the composition and chemical properties of a substance get changed. In chemical changes, new substances are produced. These changes are permanent and irreversible. For example, burning of a candle, formation of curd from milk, ripening of fruits, rusting of iron and silver jewellery getting tarnished or copper articles getting covered by green layer are all chemical changes. 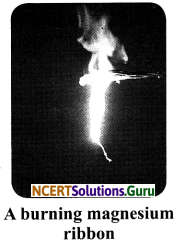 Observations: It bums with a brilliant white light. When it is completely burnt, it leaves behind a powdery ash. It is called magnesium oxide.
Conclusion: Heat and light are given out in this process. It is not possible to recover magnesium ribbon in the original form from the white powdery ash. Therefore, burning of magnesium ribbon is a chemical change.

ii. Reaction of copper sulphate with iron is also a chemical change which represents a change is colour by formation of a new substance. 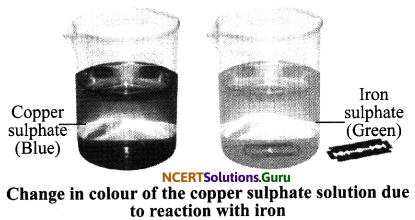 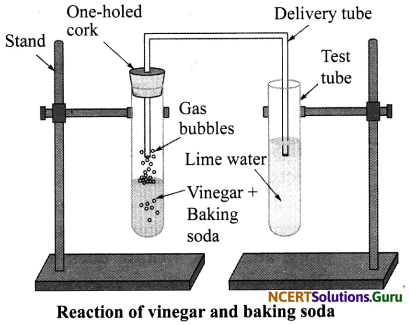 Observation: Bubbles of gas are seen in vinegar. This gas turns lime water milky white in colour.
Conclusion: Carbon dioxide is released in the above reaction which turns lime water milky. It is a chemical change. The equation can be represented as:
Baking soda (NaHCO3) + Vinegar (CH3COOH) → Sodium acetate (CH3COONa) + CO2 + H2O

Rusting of Iron: Iron reacts with oxygen and moisture present in the atmosphere to form a brown, flaky substance called rust. Rusting of iron is an undesirable change because the layer of rust formed falls off, exposing the metal to further rusting leading to corrosion of iron. As a result, iron objects become weak with passage of time. The process of rusting can be represented by the following equation:
Iron (Fe) + Oxygen (O2) + Water (H2O) → Iron oxide (Fe2O3.xH2O)
The iron oxide is called rust. Rust of iron is chemically different from iron and hence rusting is a chemical change.

Question 1.
What are the two main kinds of changes?
Answer:
Physical changes and chemical changes.

Question 4.
What is rust?
Answer:
Iron reacts with oxygen and moisture present in the atmosphere to form a brown, flaky substance called rust. It is chemically iron oxide.

Question 5.
What kind of change is rusting?
Answer:
Chemical change.

Question 6.
What are the essential conditions for rusting?
Answer:
Presence of moisture and presence of oxygen in the air.

Question 11.
What is the colour of flame when magnesium is burnt?
Answer:
Dazzling white colour.

Question 13.
What happens when carbon dioxide is passed through lime water?
Answer:
Lime water becomes milky due to the formation of calcium carbonate.

Question 1.
Define galvanisation.
Answer:
The process of depositing a coat of zinc layer on articles made of copper, iron other metals, which get corroded when exposed to moist air for long time is called galvanisation. For example: Iron bridges and ships can be protected from rusting by galvanising the iron using zinc. 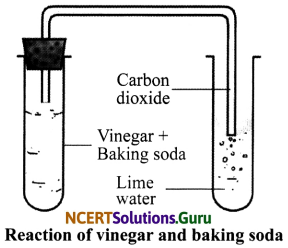 Question 5.
What is rusting? How do we prevent rusting?
Answer:
Iron reacts with oxygen and moisture present in the atmosphere to form a brown, flaky substance called rust. Rust of iron is undesirable because the layer of rust formed falls off, exposing the metal to further rusting. As a result, iron objects become weak with the passage of time.
Iron (Fe) + oxygen (O2) + water (H2O) → Iron oxide (Fe2O3.xH2O)
The iron oxide is rust.

Question 6.
Identify the type of change and state whether energy is absorbed or evolved in each one of the following events: Burning of a candle, lighting of a bulb, preparation of food by green plants, volcanic eruption, lightning.
Answer:

Question 1.
Observe the following figure and answer the question that follow: 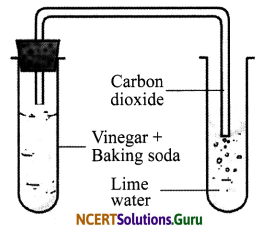 a. What does this figure show?
b. Name the gas released.
c. Write the effect of the gas on lime water.
d. Write the reaction involved in the second test tube.
Answer:
a. This figure shows the reaction of acetic acid with baking soda.
b. The gas is carbon dioxide.
c. The lime water becomes milky.
d. Lime water [Ca(OH)2] + Carbon dioxide (CO2) → Calcium carbonate (CaCO3) (milky) + Water (H2O)

Question 2.
Identify the changes shown below and state in each case, whether it is a physical or a chemical change 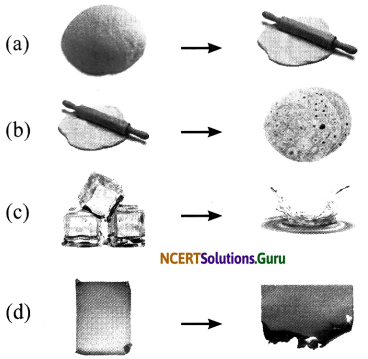