These NCERT Solutions for Class 7 Science Chapter 15 Light Questions and Answers are prepared by our highly skilled subject experts to help students while preparing for their exams.

Question 2.
Mark “T” if the statement is true and “F” if it is false.
a. We can obtain an enlarged and erect image by a convex mirror.
b. A concave lens always forms a virtual image.
c. We can obtain a real, enlarged and inverted image by a concave mirror.
d. A real image cannot be obtained on screen.
e. A concave mirror always forms a real image.
Answer:
a. False
b. True
c. True
d. False
e. False

Question 3.
Match the items given in Column I with one or more item of Column II.

Choose the correct option in questions 11-13.

Question 11.
A virtual image larger than the object can be produced by a
a. concave lens
b. concave mirror
c. convex mirror
d. plane mirror
Answer:
c. concave mirror.

Question 13.
The rearview mirror of a car is a plane mirror. A driver is reversing his car at a speed of 2 m/s. The driver sees in his rearview mirror, the image of a truck parked behind the car. The speed at which the image of the truck appears to approach the driver will be
a. 1 m/s
b. 2 m/s
c. 4 m/s
d. 8 m/s
Answer:
c. 4 m/s

Question 1.
Play with a mirror. Write your name with a sketch pen on a thin sheet of paper, polythene or glass. Read your name on the sheet while standing in front of a plane mirror. Now look at your image in the mirror.
Hint:
Do it yourself.

Question 2.
A burning candle in water: Take a shoebox, open on one side. Place a small lighted candle in it. Place a clear glass sheet (roughly 25 cm x 25 cm) in front of this candle. Try to locate the image of the candle behind the glass sheet. Place a glass of water at its position. Ask your friends to look at the image of the candle through the sheet of glass. Ensure that candle is not visible to your friends. Your friends will be surprised to see the candle burning in water. Try to explain the reason. 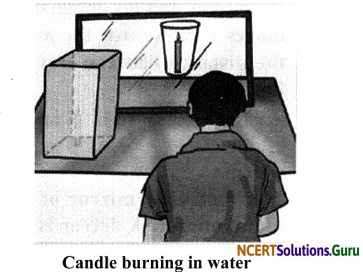 Question 3.
Make a rainbow. Try to make your own rainbow: You can try this project in the morning or in the evening. Stand with your back towards the sun. Take a hosepipe or a water pipe used in the garden. Make a fine spray in front of you. You can see different colours of rainbow in the spray.
Hint:
Do it yourself.

Question 4.
Visit a laughing gallery in some science centre or a science park or a village mela. You will find some large mirrors there. You can see your distorted and funny images in these mirrors. Try to find out the kind of mirror used there.
Hint:
Spherical mirrors are used to form funny images. This is because normal plane mirrors produce a perfect image whereas we need distorted, funny images which can be only produced by curved mirrors.

Question 5.
Visit a nearby hospital. You can also visit the clinic of an ENT specialist or a dentist. Request the doctor to show you the mirror used for examination of ear, nose, throat and teeth. Can you recognise the kind of mirror used in these instruments?
Hint:
Concave mirrors are used by dentists because at a short range, the concave mirror produces magnified, upright images of face. By these mirrors, dentists can examine the patient more easily.

Question 6.
Roleplay: Here is a game that a group of children can play. One child will be chosen to act as object and other will act as the image of the object. The object and the image will sit opposite to each other. The object will make movements, such as raising a hand, touching an ear, etc. The image will have to make the correct movement following the movement of the object. The rest of the group will watch the movements of the image. If the image fails to make the correct movement, she/he will be retired. Another child will take her/ his place and the game will continue. A scoring scheme can be introduced. The group that scores the maximum will be declared the winner.
Hint:
Do it yourself.

Objective: To show that the image formed in a plane mirror is erect and virtual.
Materials Required: A large-sized plane mirror and a candle.
Procedure: 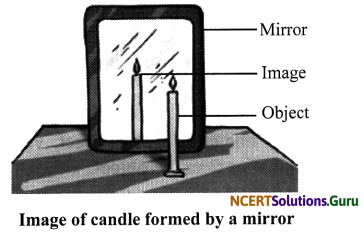 Observations: The image of candle cannot be obtained on a screen in either case.
Conclusion: This happened because the image formed in a plane mirror is erect and virtual.

Objective: To show that the image formed in a plane mirror is laterally inverted.
Materials Required: A large size plane mirror.
Procedure: 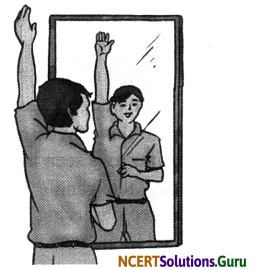 Left hand appears on the right side in the image

Spherical Mirrors: When the mirror is a part of a sphere having a curved reflecting surface, it is called a spherical mirror. Spherical mirrors are classified based on the shape of their reflecting surface in two types- concave and convex. When a part of sphere is cut, the inside part is called the concave side, while the outside part is called the convex side. A common example is a stainless steel spoon whose inside part behaves as a concave mirror and outer part behaves as a convex mirror. 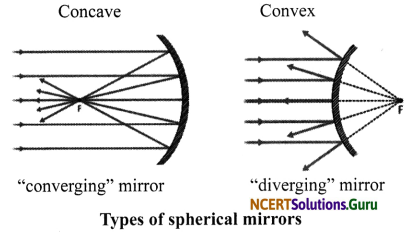 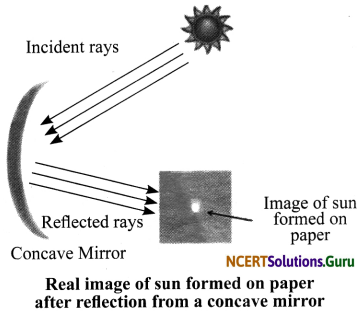 Observation: While doing this activity, the paper starts burning because the real image of sun is formed by the concave mirror.
Conclusion: Concave mirror forms real images.

ii. Convex Mirror: It is a spherical mirror whose reflecting surface is curved outwards. In case of convex mirror, the image is always erect, virtual and smaller than the object.

Observation: In convex mirror, the images of candle are smaller and erect at all distances.
Conclusion: Convex mirror always forms erect and small-sized images.

Lens: A lens is a part of a reflecting material like glass or plastic but transparent from both sides. Lenses are unlike mirrors that have a reflecting surface only on one side. Depending upon its shape, a lens can be categorised as follows:
i. Convex lens: This lens is thinner at the edges and thicker in the centre. It is a converging lens as it converges light rays. It can form real, inverted and diminished image. When the object is placed very close to the lens, the image formed is virtual, erect and magnified.

A magnifying glass is a convex lens which is used to make small things look bigger by producing their magnified (enlarged) images.

ii. Concave lens: It is the lens that is thinner at the centre than at the edges. It is a diverging lens as it diverges light rays. Image formed is always virtual, erect and diminished.

Objective: To show that the sunlight consists of seven colours.
Materials Required: A glass prism and a white sheet of paper.
Procedure: 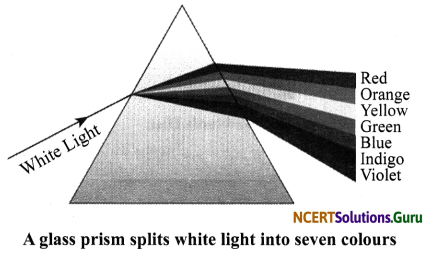 ii. Rainbow: The rainbow is an arch of seven colours in the sky. The rainbow is produced by the dispersion of sunlight by tiny rain drops suspended in the atmosphere that behave like minute prisms.

iii. Newton’s Disc: It is a circular disc on which seven colours of the rainbow are painted on seven different sectors. When the disc is rotated at certain speeds, it appears to be white. This shows how the seven colours combine to make the white light. 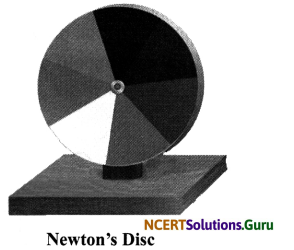 Question 1.
What is light?
Answer:
Light is a form of energy which helps us in getting the vision.

Question 2.
How many colours are there in the visible spectrum?
Answer:
Seven.

Question 3.
Which types of images can be formed on a cinema screen?
Answer:
Real images.

Question 4.
Is the image of an object in a plane mirror virtual or real?
Answer:
Virtual.

Question 6.
What is virtual image?
Answer:
The image that cannot be captured on a screen is called a virtual image.

Question 7.
What is real image?
Answer:
Image that can be captured on a screen is known as real image.

Question 8.
Give an example of real image.
Answer:
In a camera, images are real and can be captured on the negative, which acts as a screen.

Question 10.
How is a rainbow formed in the sky?
Answer:
A rainbow is formed by the dispersion of the sun’s rays through raindrops into seven colours.

Question 11.
What is VIBGYOR?
Answer:
It represents the order of seven colours in the rainbow, i.e., violet, indigo, blue, green, yellow, orange and red.

Question 13.
What makes things visible to us?
Answer:
Objects are visible only when light reflected from them reaches our eyes.

Question 17.
What type of image does the outer side of a spoon show?
Answer:
The outer surface of a spoon acts like a convex mirror.

Question 8.
Give the characteristics of images formed by convex and concave lenses.
Answer:

Question 9.
What are spherical mirrors? Give their types.
Answer:
Mirrors having curved surfaces are known as spherical mirrors. Their name is so, because they are considered as a part of a hollow sphere. Mirrors are mainly of two types: concave mirrors and convex mirrors. 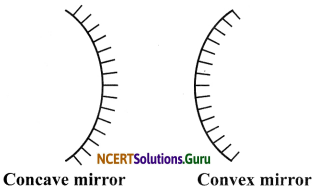 Question 1.
a. What is a lens? Name the two types of lenses. Name any five things which use lenses.
b. What kind of lens is used as a magnifying glass?
c. Which type of reflector is used in car headlights for producing a parallel beam of light?
Answer:
a. A lens is a piece of any transparent material bound by two curved surfaces or by one curved and one plane surface. When light rays pass through a lens, they bend and change their direction. The two types of lenses are:

The five things which use lenses are: Spectacles, cameras, microscopes, telescopes and film projectors.
b. Convex lens is used as a magnifying glass.
c. Concave mirrors are used in vehicle headlights to send parallel rays because it allows the light rays to be focused as a single beam and give more power to the light that makes it more efficient for seeing and to be seen by others.

Question 2.
What is Newton’s disc? Why does it appear white when rotated?
Answer:
A circular disc constructed by Newton which is divided into seven parts painted with seven colours is known as Newton’s disc. The colours painted on disc are those of the spectrum of visible light. When the disc is rotated fast, the colours get mixed together and the disc appears to be whitish. This appearance of white light on rotating disc suggests that the white light consists of seven colours. 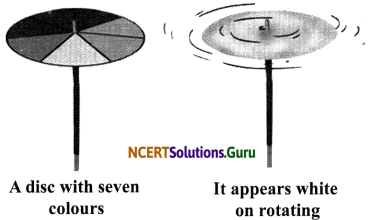 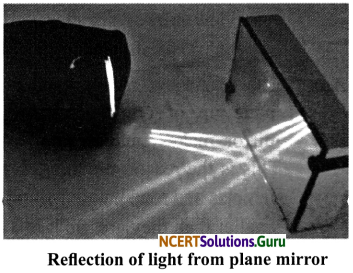 Question 5.
Write an experiment to show that the sunlight consists of seven colours.
Answer:
Take a glass prism. Allow a narrow beam of sunlight through a small hole in the window of a dark room to fall on one face of the prism. Let the light coming out of the other face of the prism fall on a white sheet of paper or on a white wall. We see colours similar to those in a rainbow. This shows that the sunlight consists of seven colours. 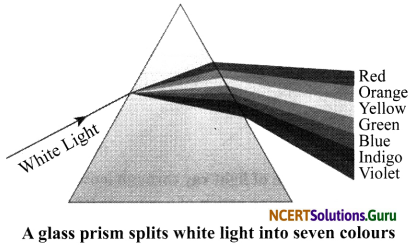 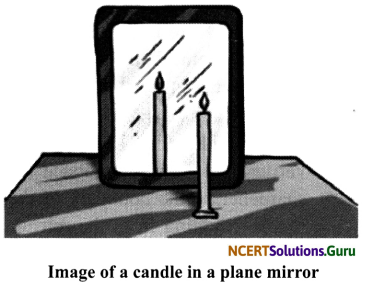