Quality Working with the text

Question 1.
What was the author’s opinion about Mr Gessler as a bootmaker?
Answer:
The author thought that Mr Gessler was an excellent bootmaker. His boots never failed to fit, and were of the best quality.

Question 4.
What was Mr Gessler’s complaint against “bigfirms ”?
Answer:
Mr Gessler believed that the “big firms” had no self-respect, and that they got so many customers because of advertisement, and not due to their hard work. He said that they take away customers from people like him who loved their boots. He complained that he had no work, and that it was growing less and less every year.

Question 5.
Why did the author order so many pairs of boots? Did he really need them?
Answer:
The author ordered so many pairs of boots because he felt guilty of wearing boots manufactured by the “big firms”. He had realized how much struggle Mr Gessler had to do. No, he did not need so many of them. He just felt a whole lot of pity for Mr Gessler and what he was going through.

Question 1.
Study the following phrases and their meanings. Use them appropriately to complete the sentences that follow.
Solved

Question 3.
Each of the following words contains the sound ‘sh ’ (as in shine) in the beginning or in the middle or at the end. First speak out all the words clearly. Then arrange the words in three groups in the table on page 80.
Solved

Question 1.
Do you think Mr Gessler was a failure as a bootmaker or as a competitive businessman?
(Encourage the students to express their opinions clearly.) Sample answer:
Answer:
I think Mr Gessler was not a competitive businessman bejeause he believed in delivering quality boots to his customers. He put his heart and soul into making the boots.He did not do his work because of profit, but for his own satisfaction. He never advertised. In fact, the successor of the shop tells the author that if Mr Gessler had advertised, he could have easily made money. But he dies of starvation in the end. This kind of thing can never happen to a good businessman.

Question 2.
What is the significance of the title? To whom or to what does it refer?
Answer:
The title of the story is ‘Quality’ which means that something is the best that there can be. This is true of Mr Gessler’s boots. He had the best leather and did all the work himself. He treated all his boots like a work of art and no one in London produced boots the way he did.

He was simply the best boot maker in England. In fact, his focus on the quality of the boots made him take fewer orders and spend more time on each pair of boots. This way, he lost a lot of customers, but he never compromised on their quality.

Question 3.
When Mr Gessler speaks, p,t,k, sound like b,d,g. Canyou say these words as Mr Gessler would say them?
Answer:
Id comez and never sdobs. Does id buder me? Not at all. Ask my brudder, please.

Question 4
Speak to five adults in your neighbourhood. Ask them the following questions (in any language they are comfortable in). Then come back and share your findings with the class. (Encourage the students to complete this exercise on their own.)Sample answer
Answer: 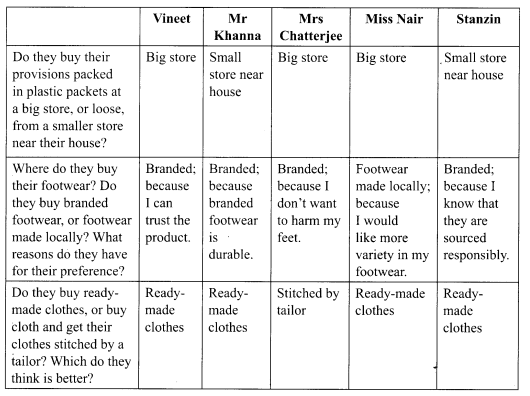 Question 5.
Let pairs of students talk to each other about leaving the country. One student repeats Ajit s statement. The other gives a reason for not agreeing with Ajit.
Answer:

Question 1.
Based on the following points, write a story.
Answer:
Last month my aunt decided to visit her parents, and so my uncle had to do everything by himself. My aunt was very happy about it. She had been after him for so many years to get him to help her in doing the household chores. But he never listened to her. But what my aunt did not realize was it was better that way. She had no idea that my .uncle’s absent-mindedness could almost cost them the house.

One day, while cooking vegetables on stove, my uncle did not have the patience to stand there and wait for them to cook. So, he thought it was as good a time as any to clean his bicycle. He went outside and started cleaning his mountain bike using some machine oil and a clean cloth. After some time, the neigbour called him outside to ask if something was burning inside the house. My uncle remembered the vegetables on the stove. He hurried inside, only to find that the vegetables were about to be burnt.

Having no idea what to do next, he put some oil into the pan. He had hardly added the oil when the vegetables caught fire and began to bum, flames rising from the pan and threatening to spread everywhere. He checked the oil to see what was wrong. He had added machine oil to the vegetables. He brought a bucket of water from the bathroom, and poured the entire contents of the bucket on the gas stove. The flames died down, but the kitchen was a complete mess. He ordered the food from outside and did not dare to cook again.