Gopal and the Hilsa-Fish NCERT Text Book Questions and Answers

Gopal and the Hilsa-Fish Working with the text

Question 5.
Explain why no one seemed to be interested in talking about the hilsa-fish which Gopal had bought.
Answer:
Gopal was dressed in a very bizarre manner, so much so, that it was him and his strange acts that caught the attention of everyone in town. Everybody kept talking about and noticing his strange and funny appearance for five minutes, and no one seemed to notice the hilsa-fish that he was carrying.

Question 6.
Write ‘True’or ‘False’ against each of the following sentences.

Gopal and the Hilsa-Fish Working with language

Question 1.
Change the following sentences in the story to reported speech.
i. Why is your face half-shaven?
Answer:
Gopal’s wife asked him why his face was half-shaven.

Question 2.
Find out the meaning of the following words by looking them up in the dictionary. Then use them in sentences
of your own.
i. challenge: a task or situation that tests someone’s abilities
He threw a challenge to me to drink the whole contents of the milk bottle, in a single go.

ii. mystic: a spiritual person who understands mysteries
Rumi was a mystic, who is still known to us for his poetry.

iii. comical: amusing and funny
Isn’t it comical how he did not notice that I was standing right behind him?

iv. courtier: a person who attends a royal court as a companion or adviser to the king or queen
The king had very lazy couriers.

v. smearing: coating or marking something carelessly with grease or a sticky substance He was hurriedly smearing his face with moisturiser. He was late for the presentation.

Gopal and the Hilsa-Fish Picture reading

Question 1.
Look at the pictures and read the text aloud.
(Encourage the students to read the given text aloud.)

Question 2.
Now ask your partner questions about each picture.
i. Where is the stag?
Answer:
The stag is standing by the side of a pond.

ii. What is he doing?
Answer:
He is looking at his reflection in the water of the pond and is appreciating his horns.

iii. Does he like his antlers (horns)?
Answer:
Yes, he is proud of his antlers. He likes them a lot.

v. Why is the stag running?
Answer:
The stag is running to try and escape the hunters who are following him.

vii. Where are the hunters now?
Answer:
The hunters are now very near him.

ix. Is the stag free?
Answer:
Yes, he is free in the end.

x. What does the stag say about his horns and his legs?
Answer:
He says that even though he was proud of his horns, they could have caused his death. But it was his legs that he hated which saved him from death.

Question 3.
Now write the story’ in your own words. Give it a title. Sample answer
Answer:
Suggested title: Handsome is as handsome does
There was once a stag that went to drink some water at the pond. At the pond, he could not help but see the reflection of his antlers in the water. He was mesmerized by his own beauty and grandeur. How beautiful he was! But then he noticed his thin legs and felt a sense of pity for himself. “Why were they so thin and ugly,” he thought.

Suddenly, he heard some voices and then turned his back to see where they were coming from. He realized that it were some hunters. He had just begun to run when the hunters started following him furiously. They were carrying guns with them. They shot at him twice, but missed him. He ran fast as he could. Just when he saw them approaching right behind him, he tried to escape into a shrub.

But what a misfortune! His antlers interwined with the twigs in the shrub and did not let him hide properly in the bush. The hunters were just behind him, but gave up on the hunt on hearing a tiger roar nearby. He felt relieved after they left. Then he began to look at his legs pensively and thanked his stars for it was his legs that helped him escape from the hunters. And the antlers, as beautiful they were to look at, proved to be his curse.

He felt that he should be proud of himself, of his entire being, and not hate any part of his body. After all, appearances are deceptive. He decided that he is going to be beautiful, inside out.

Question 4.
Complete the following word ladder with the help of the clues given below. 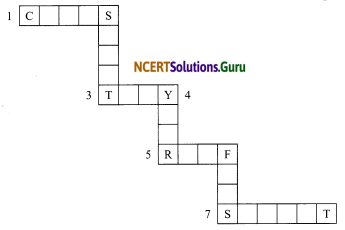