The Story of Cricket NCERT Text Book Questions and Answers

The Story of Cricket Comprehension check-I

Question 3.
How is a cricket bat different from a hockey stick?
Answer:
Hockey-sticks curve outwards at the bottom, and till the early eighteenth century, this was the case with bats as well. However, later, the curved bat was replaced with the straight one. A bat is relatively thicker than a hockey stick and does not curve at the bottom. It is also wider than a hockey stick. A bat comprises of two parts—the blade and the handle.

The Story of Cricket Comprehension check-II

Write True or False against each of the following sentences.

The Story of Cricket Comprehension check-III

Question 1.
A ‘professional’ cricket player is one who makes a living by playing cricket. Find the opposite of ‘professional ’ in the last paragraph.
Answer:
Amateur

The Story of Cricket Working with the text

Question 3.
The rivalry between the Parsis and the Bombay Gymkhana had a happy ending for the former. What does ‘a happy ending’refer to?
Answer:
The happy ending referred to here is that the Parsi team beat the Bombay Gymkhana at cricket in 1889, just four years after the foundation of the Indian National Congress in 1885, an organisation that was lucky to have amongst its early leaders the great Parsi statesman and intellectual Dadabhai Naoroji.

Children who had never previously had the chance to watch international cricket because they lived outside the big cities, could now watch and learn by imitating their heroes. The technology of satellite television and the world-wide reach of multi-national television companies created a global market for cricket.

Question 5.
Why has cricket a large viewership in India, not in China or Russia?
Answer:
India has the largest viewership for the game amongst the cricket-playing nations because the game enjoys a lot of prestige and honour. It is one game that brings the people of all regions together. It is a uniting factor, in that sense. Cricket is hugely popular in India and is played at grassroot level.

Besides, there have been countless stories of cricketers who have come from poor backgrounds but have made a name for themselves in the field of cricket. It is not the same in countries like Russia and China, where other sports are more popular than cricket.

Question 6.
What do you understand by the game’s (cricket) ‘equipment ’?
Answer:
The equipment needed to play cricket include a bat, a ball, gloves, helmets, stumps and pads. Cricket’s most important tools are all made of natural, preindustrial materials. The bat is made with leather, twine and cork. Even today both bat and ball are handmade, not industrially manufactured. The material of the bat changed slightly over time.

Question 8.
How is cricket different from other team games?
Answer:
A cricket match is different from other team games because a match can take five days to be completed, and still end in a draw. No other modem team sport takes even half as much time to complete. A football match is generally over in an hour-and-a-half. Even baseball completes nine innings in less than half the time that it takes to play a limited-overs match.

Another curious characteristic of cricket is that the length of the pitch is specified — 22 yards — but the size or shape of the ground is not. Most other team sports, such as, hockey and football lay down the dimensions of the playing area. Cricket does not. Grounds can be oval or nearly circular. This is not the case in other sports, where the size and shape of a ground is always fixed.

Question 9.
How have advances in technology affected the game of cricket?
Answer:
In the matter of protective equipment, cricket has been influenced by technological change. The invention of vulcanized rubber led to the introduction of pads in 1848 and protective gloves soon afterwards. The modem game would be unimaginable without helmets made out of metal and synthetic lightweight materials.

Question 10.
Explain how cricket changed with changing times and yet remained unchanged in some ways.
Answer:
As far as the rules are concerned, a lot of changes have characterized cricket. The bats used to be shaped like a hockey stick, and players used to bowl underarm. It is no longer an elite sport that it started out to be. However, we can say that in many ways it has also remained unchanged. The cricket equipment has not undergone a lot of change. Cricket’s most important tools are still made of natural, pre-industrial materials. The bat is made with leather, twine and cork. Even today, both bat and ball are handmade, not industrially manufactured. Unlike golf and tennis, cricket has refused to remake its tools with industrial or man-made materials such as plastic, fibreglass and metal.

However, in the matter of protective equipment, cricket has been influenced by technological change. The invention of vulcanized rubbber led to the introduction of pads in 1848 and protective gloves soon afterwards. The modem game is unimaginable without helmets made out of metal and synthetic lightweight materials.

The Story of Cricket Working with language 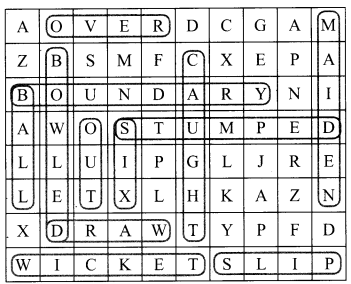 Question 3.
Use the following phrases appropriately in place of the italicized words in the sentences given below.

The Story of Cricket Speaking and writing

Question 2.
Write two paragraphs describing a bus ride to watch a cricket match in a village. Use the following points. Add some of your own. (Encourage the students to use their creativity and formulate their answers.)
Answer:
My friends and I wanted to go to a farway village to watch a cricket match. It was a two-hour long journey. My mother was more than glad to send me away for a few hours with our neigbours, the Sharmas and their children, to watch the match. I guess it is tiring for her to look after all of us every day, and she could use a break.

So, I was ready to go. However, at the last minute, their car broke down. Fixing it would have meant that we would miss the first innings of the match. After all, everybody was going to the village that day. So, we all decided to take the bus instead. It would be another kind of adventure for us. We went to the bus stop and were not expecting the old, rickety and crowded bus staring down at us.

However, I was so looking forward to spending this time with my friends. So, I didn’t think much about it. But with every stop, more and more people boarded the bus, and there was hardly any room to stand or breathe. Nonethessless,

I was enjoying the views outside. And the passengers were also very friendly. They were all going to see the match. They were discussing the players and the pitch, and placing bets on who was going to win today. I was happy to join in and share my opinion.

We reached the venue of thematch quite tired with the journey. But we did not want to spoil our trip so easily. We had come to watch the match, and the match we will see. It was between two villages, and the players all looked robust and in good shape. What caught my attention were the makeshift stumps, rough pitch and a rubber ball. Nonetheless, the match was enjoyable, and we were cheering for our favourite team and players. In the end, our team won.

But I was not ready for another trip in the bus. So, we all decided that it would be better to get a taxi from there. In the comfort of the taxi, I remembered how tiring the bus journey was, but the friendly passengers and the lovely views did make up for all the trouble we faced on the trip.