These NCERT Solutions for Class 6 Science Chapter 8 Body Movement Questions and Answers are prepared by our highly skilled subject experts to help students while preparing for their exams.

Question 2.
Indicate true (T) and false (F) among the following sentences.
a. The movement and locomotion of all animals is exactly the same.
b. The cartilages are harder than bones.
c. The finger bones do not have joints.
d. The forearm has two bones.
e. Cockroaches have an outer skeleton.
Answer:
a. False
b. False
c. True
d. True
e. True

Question 3.
Match the items in Column I with one or more items of Column II.

Question 4.
Answer the following questions.
a. What is a ball and socket joint?
b. Which of the skull bones are movable?
c. Why can our elbow not move backwards?
Answer:
a. The rounded end of bone fits into the cavity of the other bone. Such a joint allows movements in all directions. This type of joint is called ball and socket joint.
b. The facial bones of our skull comprise upper and lower jaw, in which lower jaw is movable.
c. Our elbow has hinge joint. These joints allow movement only in one plane like a door hinge and not more than 180 degrees.

Objective: To show that we are able to bend or rotate our body only at joints.
Materials Required: Wooden scale arid ropes threads.
Procedure: 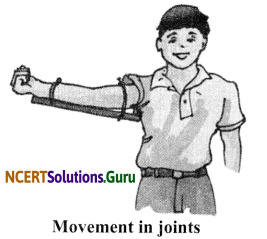 Now, try to bend the arm.
Observations: After tying the scale, we cannot bend the arm at the elbow.
Conclusion: We can see that we can bend or move our body at joints only.

Objective: To make a ball and socket joint.
Materials Required: A strip of paper, a rubber or plastic ball.
Procedure: 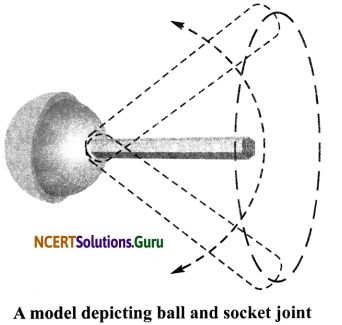 Observation: This formation allowed free movement of the paper in the ball.
Conclusion: The rounded end of one bone fits into the cavity of the other bone is called the ball and socket joint.

Skeletal System: Skeletal system is the framework of bones and cartilages which supports the body. It consists of the following parts:
i. Skull: Skull is the bony part of head which is made of 22 bony plates joined together. 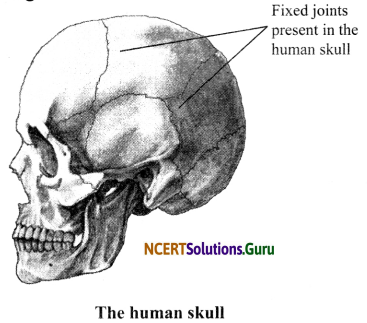 ii. Backbone: Backbone is a long hollow, rod like structure running from the neck to the hips inside the body.
Vertebrae are the small bones which make up the backbone.
iii. Ribcage: Ribcage is 12 pairs of ribs along with backbone making a cone-shaped cage which protects the lungs and the heart. 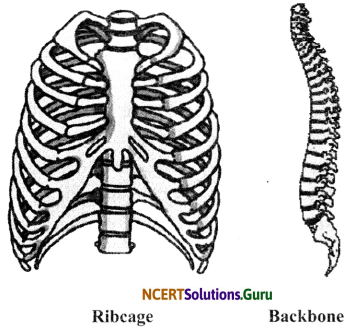 Objective: To feel the chest bones and the backbone.
Procedure:

Observation: Rib join the chest bone and the backbone together to form a box. This is called the rib cage. Some important internal parts of our body lie protected inside this cage.
Conclusion: Backbone is made of many small bones. The rib cage is joined to these bones.

Cartilage: Cartilage is a solid but semi-rigid and flexible tissue which smoothens bones surfaces at joints. It also helps in forming the framework of the body called skeleton. Nose, ear, trachea and larynx have cartilage.

Gait of Animals
i. Earthworm: The body of an earthworm is made up of many rings joined end to end. It lacks bones. It has muscles which help to extend and shorten the body. During movement, it first extends the front part of the body, keeping the rear portion fixed to the ground. Then it fixes the front end and releases the rear end. It then shortens the body and pulls the rear end forward. In this way, the earthworm can move through soil. Its body secretes a slimy substance to help the movement.

ii. Snail: It has a shell which is the outer skeleton of the snail, but is not made of bones. A thick structure, called foot, and the head of the snail may come out of an opening in the shell. The foot is made of strong muscles. The wavy motion of the foot can be seen in a snail.

iii. Cockroach: Cockroaches walk, climb as well as fly in the air. They have three pairs of legs that help in walking. Their body is covered with a hard, outer skeleton is made of number of plates joined together that permit movement. There are two pairs of wings attached to the body that help in flying.

iv. Birds: Birds fly in the air and walk on the ground. Some birds such as ducks and swans can also swim in water. Their bones are hollow and light. The bones of the hind limbs are used for walking and perching. The forelimbs are modified as wings. The shoulder bones are strong. The breastbones are modified to hold muscles of flight which are used to move the wings up and down.

v. Fish: The head and tail of the fish are smaller than the middle portion of the body. This body shape is called streamlined. This shape allow the fish to move in water. The skeleton of the fish is covered with strong muscles. The fish forms a curve while swimming. Then, quickly, the body and tail curve to the other side. This makes a jerk and pushes the body forward. This is helped by the fins of the tail. Fish also have other fins on their body which mainly help to keep the balance of the body and to keep direction while swimming.

vi. Snake: Snakes have a long backbone and many thin muscles. Muscles also interconnect the backbone, ribs and skin. The snake’s body curves into many loops, each loop giving it a forward push by pressing against the ground. The snake moves forward very fast and not in a straight line. It is called slithering movement.

Question 5.
What is backbone made of?
Answer:
The backbone is made up of small bones known as vertebrae.

Question 7.
What is patella?
Answer:
Knee cap is called patella.

Question 8.
Which two types of muscles does an earthworm’s body have?
Answer:
Circular muscles and longitudinal muscles.

Question 9.
What is slithering?
Answer:
The movement of snake is called slithering.

Question 10.
Name an animal which swims in water by moving its tail from side to side.
Answer:
Fish.

Question 1.
Where are these joints located in your body?
a. Ball and socket joint
b. Pivotal joint
c. Hinge joint
d. Gliding joint.
Answer:
a. Between shoulder and upper arm; between thigh and hip
b. Between the first vertebrae and axis vertebrae
c. Knee joint
d. Movable joints of backbone

Question 2.
What is a cartilage? Where is it present?
Answer:
A solid but semi-rigid and flexible tissue is called cartilage. It smoothens bone surfaces at joints. It is present in the nose tip, ear pinna, trachea and larynx.

Question 3.
Define endoskeleton with example.
Answer:
The skeleton which lies inside the body and is covered by soft parts like flesh is known as endoskeleton. Example, humans, elephants, dogs, etc., have endoskeleton.

Question 6.
What are the main functions of the skull?
Answer:

Question 7.
How do muscles work?
Answer:
The muscles work in pairs. When one of them contracts, the bone is pulled in that direction. The other muscle of the pair relaxes. To move the bone in the opposite direction, the relaxed muscle contracts to pull the bone towards its original position while the first one relaxes. 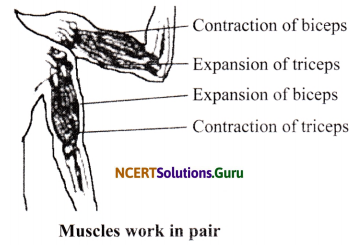 Question 8.
How is the brain protected?
Answer:
The brain is located inside the skull of our body. The brain is protected by cranium, a bony box of the skull. Inside the cranium, the brain is contained in a fluid-filled balloon which provides further shock absorption for protection.

Question 9.
Describe the movements of:
(a) earthworm, (b) snail.
Answer:
a. Earthworm has muscles but no bones.
During the movement, earthworm first extends the front part of the body keeping the rear portion fixed to the ground. Then it fixes the front and releases the rear end. It then shortens the body and pulls the rear end forward. In this way, by repeating such muscular expansions and contractions, earthworm moves. 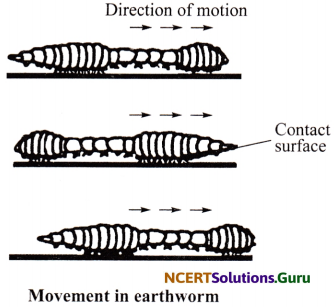 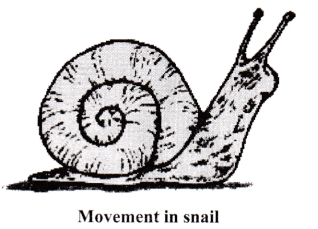 b. A snail moves with the help of a large, disc-shaped muscular foot. It has two sets of muscles in the foot. These muscles contract and expand alternately producing a kind of wave effect (from back to front). A series of waves in the muscles of the foot make the snail move forward.

Question 10.
How do fish move in water?
Answer:
The body of the fish is streamlined. The streamlined shape helps the fish to move in water. The skeleton of the fish is covered with muscles which make the front part of the body to curve to one side and the tail part swings towards the opposite side. This makes a jerk and pushes the body forward. In this way, it moves in the water. 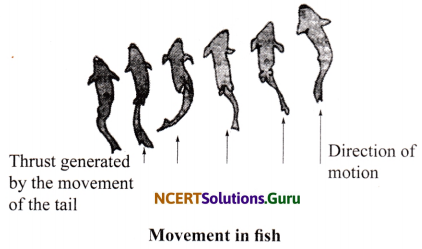 Question 1.
What is backbone? Describe its formation. Write its main functions.
Answer:
The backbone is a long, hollow structure running from the neck to the hips, inside our body. The small bones which make up the backbone are called vertebrae. It consists of 33 small ring-like vertebrae joined end to end. The first 24 vertebrae are joined serially by elastic cartilages. The main nerve cord passes through the hollow tube formed by the vertebrae. The 5 vertebrae of the hip are fuse and inseparable. 4 vertebrae of the tail are also fused.

Main functions of the backbone are:

Question 2.
Explain the various kinds of joints found in our body and give an example of each.
Answer:
a. Fixed joints: Those joints which do not allow movement are called fixed joints. Example: Skull bones. 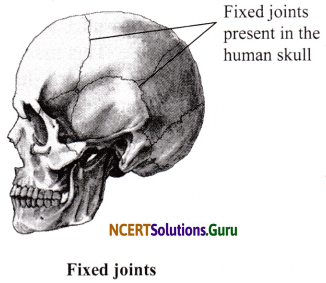 b. Bali and socket joint: In this joint, one end of the bone has a round shape like a ball which fits into a socket in the other bone. It permits movements of the bones in all directions. Example, shoulder joints and hip joints have ball and socket joints. 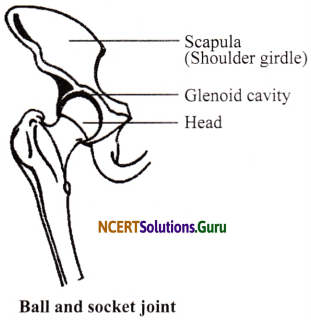 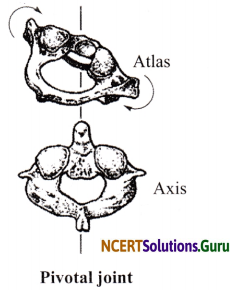 d. Hinge joint: This joint allows movement only in one direction, forwards and backwards. Elbow joint and knee joint have this type of joint. 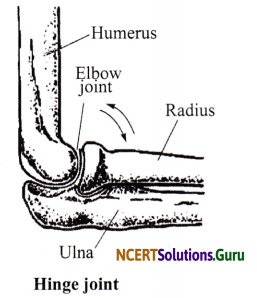 e. Gliding joint: This joint allow a limited movement due to sliding nature of cartilages. Movable joints of backbone are gliding joint. 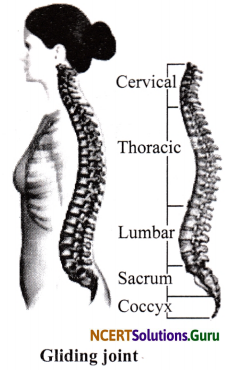 The main functions of the skeletal system are: 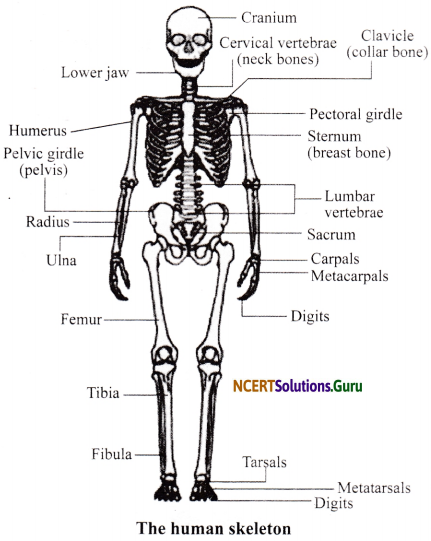 Question 5.
Describe the hip bone. Write its main functions.
Answer:
The hip bone forms a large basin shaped frame at the lower end of the backbone to which the legs are attached. The hip bone is also called pelvis. The hip bone encloses the position of our body below the stomach. The thigh bones of our legs are joined to the hip bone by the ball and socket joints.

The main functions of hip bone are:

Question 6.
Explain the structure of leg.
Answer:
The leg includes the thigh, lower leg, ankle, foot and the toes.

The toe bones also help us in walking and running. They are called tarsals. 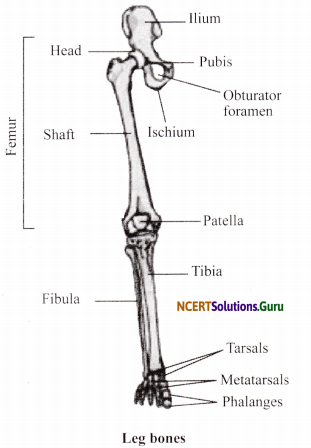 b. What type of joint is present between these bones?
c. Give one function of this structure.
Answer:
a. Backbone
b. Gliding joint
c. It protects the spinal cord

Question 2.
a. Identify the figure shown below: 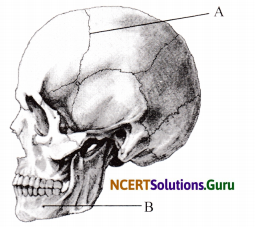 b. Name the type of joint in part marked A.
c. Is the joint marked B movable or not?
Answer:
a. Skull
b. Fixed joint
c. It is immovable.