These NCERT Solutions for Class 6 Science Chapter 15 Air Around Us Questions and Answers are prepared by our highly skilled subject experts to help students while preparing for their exams.

Air Around Us NCERT Solutions for Class 6 Science Chapter 15

Question 1.
What is the composition of air?
Answer:
Air is mixture of nitrogen, oxygen, carbon dioxide, water vapour and a few other gases. Some dust particles may also be present in it. Air is a mixture of gases, mainly containing nitrogen (about 78% by volume) and oxygen (about 21% by volume). The remaining 1% is made up gases, such as argon (about 0.9%), carbon dioxide (0.03%) and small amounts of other gases. Varying quantities of dust, smoke and water vapour are also present. The amount of these in the air varies from place to place and from time to time.

Question 3.
How will you show that air supports burning?
Answer:
Fix two burning candles of same size in the middle of two troughs. Fill the troughs with equal amounts of water. The water level should be below the height of candles. Light the candles and cover one of them with a bigger jar and the other one with a smaller jar. Observe carefully what happens to the burning candles and the water level. Note the time after which both the candles go off. You will observe that the candle covered with smaller glass jar extinguishes first and then the one covered with the bigger jar. Water level rises up in both the jars. This shows that air is required for buming/combustion. Bigger glass jar had more air inside it, so the candle kept burning for a longer time. Oxygen in the jar is consumed due to burning. Hence, water level rises up to fill the empty space in the jar. 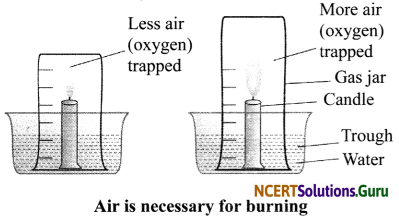 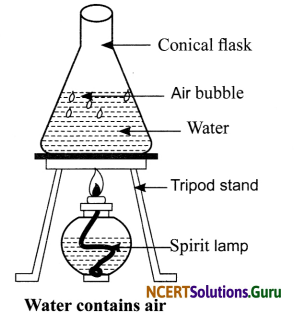 Question 5.
Why does a lump of cotton wool shrink in water?
Answer:
Cotton lump contains air in it. There are various spaces in which air is filled. When cotton lump is put into water, air present in the vacant space dissolves in water and cotton lump shrinks.

Question 6.
The layer of air around the earth is known as ……………
Answer:
Atmosphere.

Question 7.
The component of air used by green plants to make their food is …………….
Answer:
Carbon dioxide.

Question 1.
On a clear glass window facing towards an open area, fix a small rectangular strip of paper. Remove the strip after a few days. Do you notice a difference between the rectangular section that was left covered with paper and the rest of the glass window? By repeating this exercise every month, you can have an idea about the amount of dust present in air around you at different times of the year.
Hint:
Do it yourself.

Question 2.
Observe the leaves of trees, shrubs or bushes planted by the roadside. Note whether their leaves have some dust or soot deposited over them. Take similar observations with the leaves of trees in the school compound or in a garden. Is there any difference in deposition of soot on leaves of trees near the roadside? What could be the possible reasons for this difference? Take a map of your city or town and try to identify regions in the map where you have noticed very thick layer of soot on the plants by the roadside. Compare with results obtained by other classmates and mark these areas on the map. Perhaps the results from all the students could be summarised and reported in newspapers.
Hint:
Do it yourself.

Objective: To show the presence of air.
Materials required: Wind vane mounted on a stick.
Procedure

Observation: The firki starts rotating.
Conclusion: The firki moves when the air strikes its blades. This shows that air is present around us. 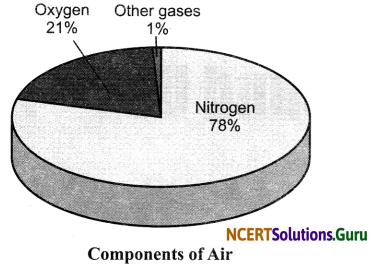 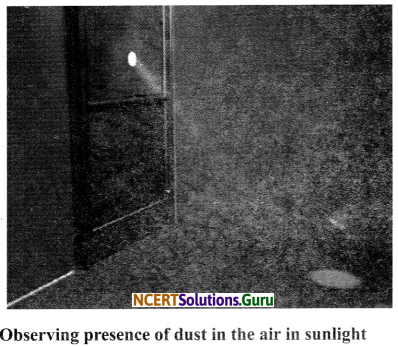 Observation: We see a large number of tiny- shining particles moving in the beam of sunlight. These are the dust particles
Conclusion: Air contains dust particles.

Oxygen-Carbon dioxide Levels:
Oxygen and carbon dioxide levels in the air are maintained by different processes like respiration and photosynthesis.

Objective: To show that a gas bottle which appears to be empty to us is actually filled with air.
Materials Required: An empty bottle and a bucket with water.

Other Uses of Air: 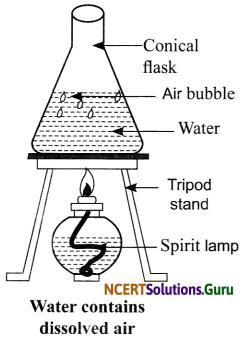 Observation: We see the bubbles of air rising up in water.
Conclusions: The air dissolves slowly in fresh water. When the water is warmed, the solubility of air decreases and it comes out of water in the form of bubbles. Hence, water contains dissolved air. 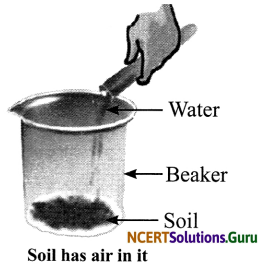 Observation:
When the water is poured on the lump of soil, it displaces the air which is seen in the form of bubbles.
Conclusion: Soil contains air trapped between its particles.

Question 1.
What is the source of carbon dioxide in the air?
Answer:
Respiration by animals and plants and burning of fuels.

Question 2.
Mention one necessary condition for the combustion to take place.
Answer:
Presence of air.

Question 3.
Why is air considered as a mixture?
Answer:
Air contains oxygen and nitrogen as its major constituents of air. These gases retain their properties in air. So the air is called a mixture.

Question 4.
Name the major gas present in the (a) inhaled air (b) exhaled air.
Answer:
a. Oxygen
b. Carbon dioxide.

Question 10.
Carbon dioxide is present to the extent of only 0.03% by volume in air. Why then is it considered to be so important?
Answer:
Air contains very little carbon dioxide – only 0.03%. However, it is a very crucial component of air as it is required by plants to make their food.

Question 11.
What is humidity?
Answer:
The amount of water vapour present in the air is known as humidity.

Question 3.
What is wind energy? Write its two advantages.
Answer:
Wind energy is a form of renewable energy produced through machines that use movement of wind as their power source.

Question 5.
What happens if the percentage of carbon-dioxide increases in the air?
Answer:
The increased percentage of carbon- dioxide will cause green house effect, i.e., it will not allow the hot rays of sun to escape from the atmosphere, after reflection, once they enter. It will lead to global warming.

Question 6.
Why do we see the sky and air clear and clean after rainfall?
Answer:
This is because the dust particles which remain suspended in air get loaded and come down on the ground due to rainfall. This is the reason that the sky and the air look clean and clear after rainfall.

Question 7.
Explain why mountaineers carry oxygen cylinders with them?
Answer:
As you go up above the sea-level, the atmospheric pressure goes on decreasing and the amount of oxygen also decreases at higher altitude.

Question 8.
What is the importance of the ozone layer in the atmosphere?
Answer:
The upper atmosphere contains a layer of gas called ozone. It prevents harmful rays of the sun from reaching the earth. These rays, called ultraviolet rays, can cause eye problems and skin cancer.

Question 10.
How is nitrogen obtained by plants?
Answer:
Nitrogen is required by plants for their growth. But plants are not able to absorb the nitrogen directly from the air. Nitrogen in the air is brought to the earth in the form of nitric acid through lightning and rain. Microbes in soil change it to nitrate compounds which are absorbed by the plants. Also, nitrogen in the air is used by us to manufacture fertilisers. These fertilisers again provide the essential nitrogen to plants. 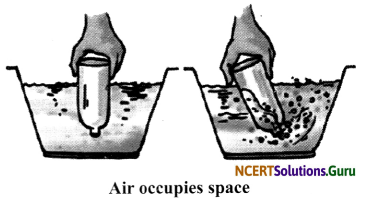 The bottle was not empty at all. In fact, it was filled completely with air even when we turned it upside down. That is why water does not enter the bottle when it is in an inverted position, as there was no space for air to escape. When the bottle was tilted, the air was able to come out in the form of bubbles and water filled up the empty space that the air has occupied.

Question 3.
Define pollution. How does air get polluted?
Answer:
The addition of unwanted substances in the environment in quantities that are harmful to living beings is called pollution. Air is getting polluted day by day because of various human activities as given below:
a. Burning of fuels like coal and petroleum. Excessive burning of fuels like wood, smoke, etc.
b. Harmful gases released from industries.
c. Smoke released by vehicles and machines releasing gases are the major causes of air pollution. These gases spread and mix in the air and spoil the quality if air, thereby making it impure.

Question 4.
List the uses of air.
Question
Besides breathing, air is useful to us in many other ways.

Procedure: Take a glass container and fix a candle at its centre. Put some quantity of water in the container. Place an empty, dry gas jar over it. Mark five marks above water surface on the jar at equal distances.

The candle is lightened and is covered with the gas jar. After some time, the candle is extinguished and the water level is raised in gas jar. The raised level in water is 1/5 of the volume of air in the gas jar. This proves that one part of the air of the jar is a gas which supports combustion, i.e., oxygen. Hence, 1/5 by volume is oxygen in air. Rest in mainly nitrogen.

Question 1.
a. What does the following pie chart represent? 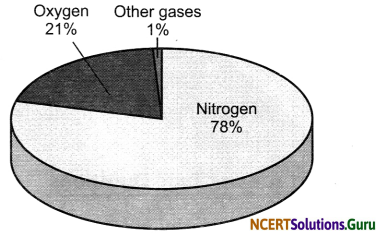 b. Which gas forms the major part of the chart?
Answer:
a. It represents the composition of air.
b. Nitrogen gas (78%).

Question 2.
Observe the figure and answer the following questions.

a. What does it represent?
b. In which case is air escaping out from bottle?
Answer:
a. It represents that air occupies space.
b. In case II.