These NCERT Solutions for Class 6 Science Chapter 13 Fun with Magnets Questions and Answers are prepared by our highly skilled subject experts to help students while preparing for their exams.

Question 2.
State whether the following statements are true or false:
a. A cylindrical magnet has only one pole.
b. Natural magnets were discovered in Greece.
c. Similar poles of a magnet repel each other.
d. Maximum iron fillings stick in the middle of a bar magnet when it is brought near them.
e. Bar magnets always point towards North-South direction when suspended freely in air.
f. A compass can be used to find East-West direction at any place.
g. Rubber is a magnetic material.
Answer:
a. False
b. True
c. True
d. False
e. True
f. True

Question 4.
Column I shows different positions in which one pole of a magnet is placed near that of the other. Column II indicates the resulting action between them for each situation. Fill in the blanks.

Question 6.
Where are poles of a bar magnet located?
Answer:
At the two ends.

Question 7.
A bar magnet has no markings to indicate its poles. How would you find out near which end is its north pole located?
Answer:
For this, we need to take following steps:

Question 8.
You are given an iron strip. How will you make it into a magnet?
Answer:
For this, you need to place the iron strip on a flat surface. Now take a bar magnet and place one of its poles near the edge of the strip of iron. Without lifting it, move it along the length of the iron strip till you reach the other end. Now lift the magnet and bring the pole to the same point of strip from where you began. Repeat this process about 30-40 times. Bring some iron fillings near the strip and observe that the strip attracts the filings. This indicates that the iron strip has become a magnet. 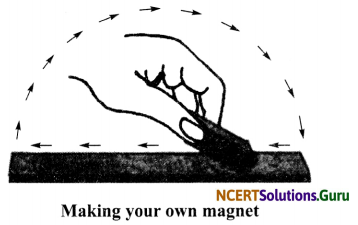 Remember that the pole of magnet and direction of its movement should not be changed. 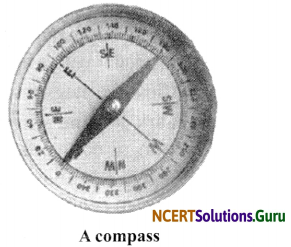 Normally the north pole of the needle is painted red or some other indication is given to identity north and south poles. So using this needle, north and south directions can be identified.

Question 10.
A magnet was brought from different directions towards a toy boat that has been floating in water in a tub. Effect observed in each case is stated in Column I. Possible reasons for the observed effects are mentioned in Column FI. Match the statements given in Column 1 with those in Column II.

Question 1.
Using a compass, find the direction in which windows and entrance to your house or classroom open.
Hint:
Do it yourself.

Question 2.
Try to place two equal sized bar magnets one above the other such that their north poles are on the same side. Note what happens and write your observations in your notebook.
Hint:
Do it yourself.

Question 4.
You can make an intelligent doll, which picks up the things it likes (Fig. 13.17 on NCERT). Take a doll and attach a small magnet in one of its hands. Cover this hand with small gloves so that the magnet is not visible. Now, your intelligent doll is ready. Ask your friends to bring different objects near the doll’s hand. Knowing the material of the object you can tell in advance whether the doll would catch it or not.
Hint:
Do it yourself.

Aim: To show that a magnet always comes to rest in a fixed direction.
Materials Required: Bar magnet and wooden stand.
Procedure: 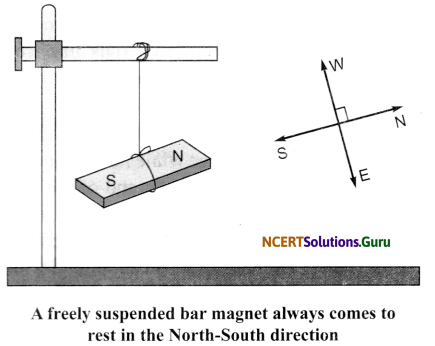 Interaction between poles of Magnet 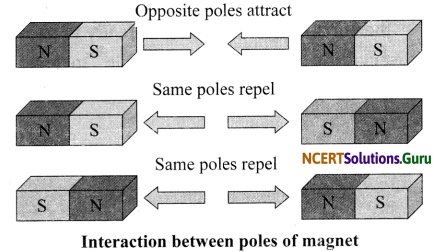 Aim: To show that magnetic force is maximum at the ends of a magnet.
Materials Required: Bar magnets and iron filings.
Procedure: 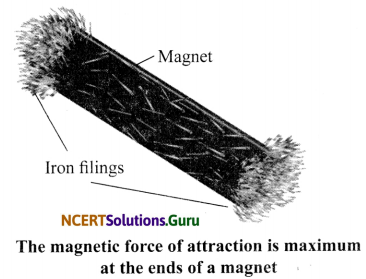 Observations: More number of iron filings stick to the ends of the magnet than at its centre.
Conclusion: The magnetic force is maximum at the ends or poles of the magnet.

Compass: The small glass case containing a magnetised needle pivoted on a nail in it is called compass. The needle rotates freely and stops in north-south direction. It is used to find directions. 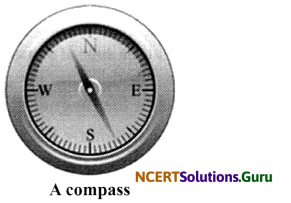 Aim: To make a simple magnetic compass.
Materials Required: A sticker showing all directions, cork and a magnetised needle.
Procedure: 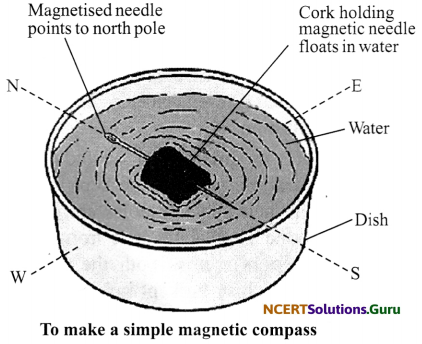 Observations: This is a simple magnetic compass that always points in north-south direction.

Question 1.
What is a magnet?
Answer:
A magnet is an object which attracts things made of iron, steel, nickel and cobalt.

Question 3.
At which place on a magnet, its magnetic force is maximum?
Answer:
At poles.

Question 4.
In which direction does a suspended magnet come to rest?
Answer:
Magnet comes to rest in N-S (north-south) direction.

Question 6.
Name the shepherd after which magnet was named.
Answer:
Magnes.

Question 8.
Name a natural material which acts like a magnet.
Answer:
Magnetite.

Question 12.
Define magnetic poles.
Answer:
The regions of a magnet where the force of magnet is the strongest are called poles of the magnet.

Question 14.
Name an instrument which is used to find directions.
Answer:
Magnetic Compass.

Question 4.
Why is a magnet called a ‘magnetic dipole’?
Answer:
Even a smallest piece of a magnet has north and south poles and we cannot separate the two poles. Therefore, poles always exist in pairs. That is why a magnet is called a “magnetic dipole”.

Question 5.
What are electromagnets?
Answer:
Electromagnet is a magnet made by passing electric current through a soft metal surrounded by a coil. The magnetic field disappears when the current is turned off. It is hence, a temporary magnet. 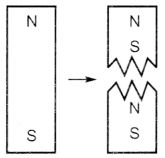 Question 7.
It is said that repulsion is a sure test for magnetism. Why is it so?
Answer:
To identify the magnet, repulsion (like poles of two magnets repel) is the only test which will let you know whether the given material is a magnet or not. This is because both poles of a magnet can attract a magnetic object but only two magnets can repel each other.

Question 8.
You are given two rods. Out of these, one is an iron rod and the other one is a magnet, how will you identify these rods?
Answer:
Take both the rods and suspend them separately. Bring one end of a bar magnet close to both the ends of the suspended rod. If it shows attraction at both the ends then it is an iron rod. If it shows attraction at one end and repulsion at the other end, then it is a bar magnet.

Question 3.
Given a bar magnet, how will you find west direction?
Answer:
To find west direction with a bar magnet, we will tie the magnet and leave it freely as a freely suspended magnet aligns itself in north-south direction. As it is free and is tied using a copper wire stirrup, slowly its north pole will itself move towards the geographical north and we can locate the west. 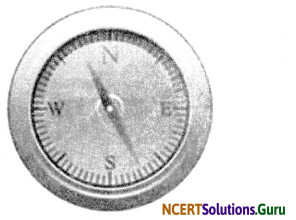 b. In which direction does it point?
Answer:
a. Magnetic compass.
b. North-south direction.

Question 2.
Observe the given picture and answer the following questions. 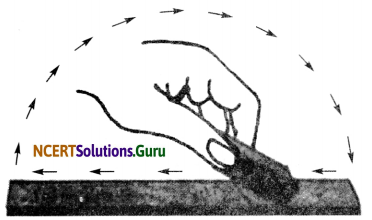