These NCERT Solutions for Class 6 Science Chapter 12 Electricity and Circuits Questions and Answers are prepared by our highly skilled subject experts to help students while preparing for their exams.

Question 3.
Explain why the bulb would not glow in the arrangement shown in the given figure. 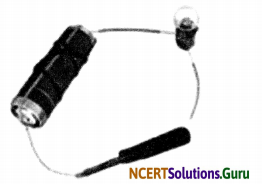 Answer:
The bulb would not glow because one end of the tester/screwdriver is made up of plastic which does not allow the electric current to flow through it.

Question 4.
Complete the drawing shown in figure to indicate where the free ends of the two wires should be joined to make the bulb glow.

Question 6.
Would the bulb glow after completing the circuit shown in figure of Question 4, if instead of safety pin we use an eraser?
Answer:
No, since eraser is an insulator so it does not allow the current to pass through it. Hence, the bulb will not glow.

Question 7.
Would the bulb glow in the circuit shown in the given figure? 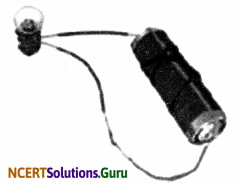 Question 1.
Imagine there were no electric supply for a month. How would that affect your day-to-day activities and others in your family? Present your imagination in the form of a story or a play. If possible stage the play written by you or your friends in school.
Hint:
Do it yourself.

Question 2.
For your friends, you may set up a game “How steady is your hand?”. You will need a cell, an electric bulb, a metal key, two iron nails (about 5 cm in length), about one and a half metre long thick metal wire (with its plastic insulation scraped off) and few pieces of connecting wires. Fix two nails nearly one metre apart on a wooden board so that these can be used as a hook. Fix the wire between the nails after inserting it through the loop of the key. Connect one end of this wire to a bulb and a cell. Connect the other terminal of the cell to the key with a wire. Ask your friend to move the loop along the straight wire without touching it. Glowing of the bulb would indicate that the loop of the key has touched the wire.
Hint:
Do it yourself. 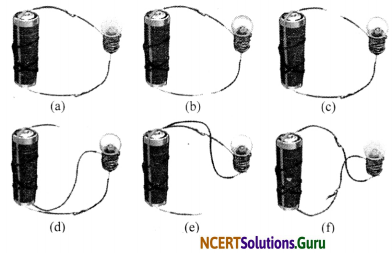 Conclusion: The electric circuit provides a complete path for electricity to pass (current to flow) between the two terminals of the electric cell. The bulb glows only when current flows through the circuit.

Objective: To study the structure of a torch bulb.
Material Required: A torch bulb.
Procedure:

Observations: The torch bulb consists of the following parts: 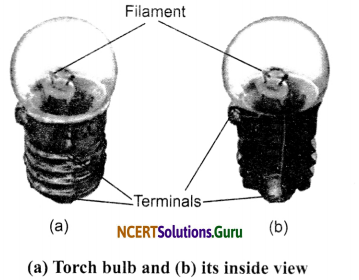 Electric switch: Electric switch is a device by which an electric circuit can be easily completed or broken. The switch is ‘ON’ in a closed circuit and ‘OFF’ in an open circuit.

Objective: To make a simple and easy switch to use in our circuit.
Materials Required: Two drawing pins, a safety pin (or a paper clip), two wires and a small sheet of thermocol or a wooden board.
Procedure: 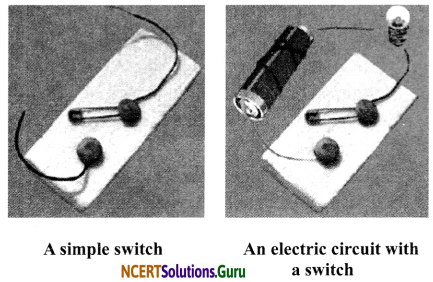 Objective: To find out which object is a conductor and which is an insulator.
Materials Required: Three pieces of wire, a small torch bulb, a thick sheet of cardboard or wood, sticky tape, pencil cell and objects such as metal spoon, eraser, peel of wood, etc. Procedure: 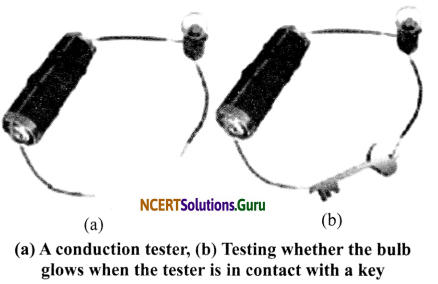 Question 1.
How much voltage is given by a single dry cell?
Answer:
1.5 volts.

Question 5.
Define battery.
Answer:
The combination of two or more than two cells is called a battery.

Question 6.
What is the work of a filament in a bulb?
Answer:
A filament gets heated and emits light in the bulb.

Question 7.
What is a solar cell?
Answer:
A solar cell is a device which converts solar energy into electrical energy.

Question 8.
Write one use of insulators.
Answer:
Insulators are used in making switchboards, handles of testers, screwdrivers, etc.

Question 9.
Name a device which is used to ‘open’ or ‘close’ a circuit.
Answer:
Switch.

Question 11.
Is electricity pollution free and a useful form of energy?
Answer:
Yes.

Question 12.
Which terminal of the cell does have a metal cap?
Answer:
Positive terminal.

Question 13.
In a cell, the carbon rod is surrounded by which mixture?
Answer:
Manganese dioxide and powdered charcoal.

Question 3.
How does a bulb start glowing with an electric cell?
Answer:
When the electric cell is connected with conducting wire and the wire ends are connected to the bulb, the bulb glows immediately.

Question 4.
If you touch an electric wire carrying current you get a shock, but if on the same wire, the birds sit they do not get any shock/current. Give reason.
Answer:
When we hold the wire carrying current then the circuit is closed and the current flows from our body and enters the earth but the birds sitting on the same wire do not get any current as the circuit is not complete. If the bird touches the earth wire, it will die due to electric shock. 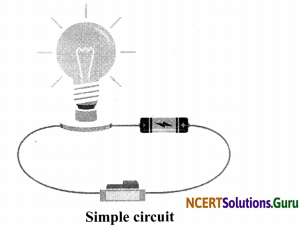 Question 2.
What is a torch? How does it work?
Answer:
A torch is a portable electric lamp which uses two or more cells to light a small bulb. A torch contains a simple electric circuit. In a torch, two (or more) cells are connected to a torch bulb through a sliding switch. When the torch is needed to provide light, we close the sliding switch by pushing it forward so that the circuit is completed and the bulb lights up.

Question 3.
What are the differences between conductors and insulators?
Answer:

Question 4.
Define the following terms: (a) Dry cell and (b) Secondary cell.
Answer:
a. Dry cell: An electric cell is used to operate objects like calculators and phones. It is a small source of electricity or electric current. It is also known as a pencil cell or dry cell. A dry cell has two terminals. One side that has a small circular metal cap is the positive terminal. It is marked with positive (+) sign. The other side has a flat metal plate behaves like the negative terminal and is marked with a negative (-) sign.

There are some chemicals inside a cell. These chemicals react to produce electricity. When the chemicals get used up, the cell stops producing electricity and the appliance stops functioning. These electric cells then . have to be replaced by new cells.

Question 5.
What is the importance of electricity in our life?
Answer:
We use a variety of things in our day-to-day life that run on electricity such as fans, lights, televisions, radio, refrigerator and computer. Electricity makes it possible to light our homes, roads, offices, markets and factories even after sunset. This helps us to continue working at night. In the field of communication, electricity is also used as a medium for the transmission of signals. The different fields of our life which depend on electricity are rather wide.

Question 1.
Observe the given circuits and tell in which of them will the bulb glow?

Question 2.
a. Identify the objects A and B.