These NCERT Solutions for Class 6 Science Chapter 11 Light, Shadows and Reflections Questions and Answers are prepared by our highly skilled subject experts to help students while preparing for their exams.

Question 1.
Rearrange the boxes given below to make a sentence that helps us understand opaque objects. 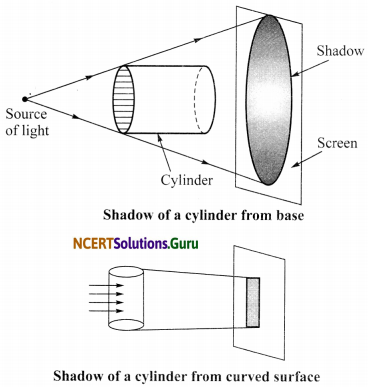 Question 2.
Daavan-Baayan – Take a comb in your right hand and bring it up to your hair and look at yourself in the mirror. There is your familiar face, grinning at you. Wait, try and find out which is the hand holding the comb, in your mirror reflection. Is it the right hand or the left? You were holding it in your right hand, isn’t it?
While a pinhole camera seems to be giving us upside down images, a mirror seems to be turning right hand into left hand and the left into right hand. We will learn more about this in the higher classes.
Hint:
Do it yourself.

Question 3.
Magic Device – In the chapter on symmetry in your Mathematics textbook, you might have made an interesting device kaleidoscope, that uses reflections. Now, let us make another device, a periscope, that uses reflections to see around corners! Ask one of your friends to stand in the corridor just out side the entrance to the classroom with a mirror in hand. Ask another friend also holding a mirror, to stand in the middle of classroom in front of the entrance. Now ask your friends to adjust their mirrors in such a way that the image of object on the other side of the corridor becomes visible to you while you are standing inside the class (Fig. 11.11 of NCERT).
You can make a simple periscope by placing two mirrors in a ‘Z’ shaped box as shown in Fig. 11.12 of NCERT. 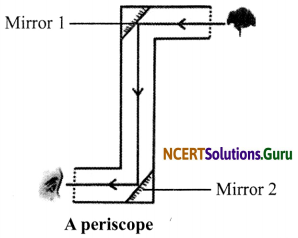 Objective: To show that light travels in a straight line path.
Materials Required: A lighted candle and a rubber tube.
Procedure: 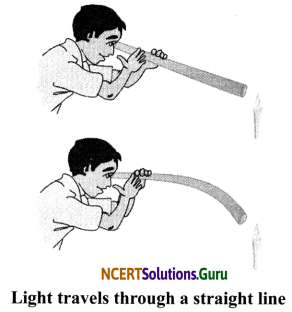 Observations: When the rubber tube is straight, candle flame can be seen but when it is bent, the candle flame cannot be seen.
Conclusion: Light travels in a straight line.

Objective: To show the various shadows of a hand.
Material Required: A torch.
Procedure:

Observations: You will see the different animals shapes on the wall. 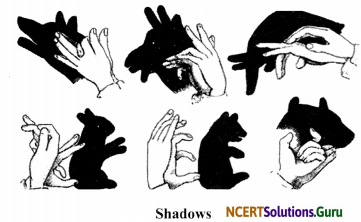 Conclusion: Shadows can mislead about the shape of the objects. We have created shadow which do not match with the objects.

Objective: To show the formations of a shadow.
Materials Required: A torch, white cardboard and a ball.
Procedure:

Observations: A shadow of the ball is formed on the cardboard screen.

Conclusion: The ball acts as an obstacle in the path of light of the torch. Because of this, rays from the torch light do not go behind the ball. So, the part of the cardboard screen behind the ball does not get any light and remains dark. This dark region on the screen is the shadow of the ball.

Pinhole Camera: Take two boxes (one large and the other small) so that one of them can slide into the other without any gap in between them. Cut open one side of each box. Make a small hole in the middle on the opposite face of the larger box. Cut out a square shape of about 5 to 6 cm in the middle of the opposite face of the smaller box. Cover this square with a tracing paper Slide the smaller box inside the larger one in such a way that the side with the tracing paper is inside. Your pinhole camera it is ready for use. Hold the pinhole camera and look through the open face of the smaller box. Use a piece of black cloth to cover your head while looking through the pinhole camera. Now look at the object that you want to capture in the camera. Make sure that the object is in bright sunlight. Move the smaller box forward or backward till you get a sharp image on the tracing paper. A pinhole camera forms an inverted image of the object on the screen. It is used to view images of objects, such as buildings and trees and for viewing solar eclipses.

Reflection of light: It is the phenomenon in which a ray of light falls on a smooth polished surface and bounces back in the same medium. 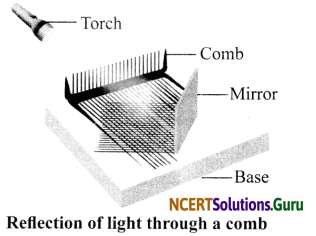 Mirror: Mirror is a smooth, highly polished reflecting surface that reflects the light falling on it. Incident may is the ray that falls on the mirror and reflected ray is the ray which bounces back.

Question 1.
Name the energy which enables us to see.
Answer:
Light.

Question 2.
Which objects allow the light to pass through them?
Answer:
Transparent.

Question 3.
Whether the moon is a luminous or a non-luminous body?
Answer:
Non-luminous.

Question 4.
What is a shadow?
Answer:
The dark patch formed on the other side of the object, opposite to the light source, is called shadow.

Question 5.
Define umbra.
Answer:
The darker part of the shadow, which always occurs in the centre, is called the umbra.

Question 6.
Define penumbra.
Answer:
The partial dark region which surrounds the umbra is called the penumbra.

Question 7.
What is the principle that a pinhole camera is based on?
Answer:
Light travels in a straight line.

Question 10.
What is the essential condition for the formation of shadow?
Answer:
A shadow is formed only when there is a surface/screen behind the opaque object.

Question 11.
Does sun change its position from morning to evening?
Answer:
Yes.

Question 12.
Does the shadow of flying bird reach the earth?
Answer:
No.

Question 13.
What happens when the pinhole of the camera is turned towards a bright object?
Answer:
A real inverted image of the object is formed on the screen.

Question 14.
What is a mirror?
Answer:
A smooth, highly polished reflecting surface is called mirror.

Question 15.
Name a device which can be used to see things on the other side of a high wall.
Answer:
Periscope.

Question 16.
Are the edges of a shadow sharp and distinct?
Answer:
Yes.

Question 4.
Explain the structure of plane mirror.
Answer:
Plane mirror is the most common type of mirror. It is a thin, flat and a smooth sheet of glass having a shiny coating of silver metal on one side. The silver coating is protected by a layer of red paint.

Question 9.
Though we cannot see the sun through clouds on a cloudy day but still there is some sunlight all around. Give reason.
Answer:
This is because being translucent, clouds allow some of the sunlight to pass through them due to which there is light on earth even in a cloudy day.

Question 3.
What are the advantages and disadvantages of a pinhole camera?
Answer:
Advantages:

Question 4.
Explain real images and virtual images with examples.
Answer:
The image which can be obtained on a screen is called a real image. In a cinema hall, we see the images of actors on the screen. So, the images formed on a cinema screen are an example of real image. Real images are formed when light rays from an object actually meet at a point after reflection from a mirror.

b. What type of image is formed in in it?
Answer:
a. It is a pinhole camera.
b. Real and inverted imaged. 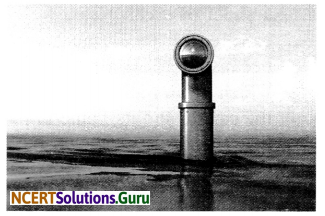 b. Is the image formed here inverted or erect?
c. Give one use of this device.
Answer:
a. Periscope.
b. Erect image.
c. It is used in submarines to see things above water surface.