Detailed, Step-by-Step NCERT Solutions for 11 History Chapter 3 An Empire Across Three Continents Questions and Answers were solved by Expert Teachers as per NCERT (CBSE) Book guidelines covering each topic in chapter to ensure complete preparation.

Question 1.
If you had lived in the Roman Empire where would you rather had lived – in the towns or in the countryside? Explain why?
Answer:
As the historians of that period, Strato and Pliny have stated, I would have lived in countryside specially either in Campania or Sicily in Italy. This is because these were the wealthiest areas for production of wheat and other grains. Thus, I would have exported grains in large quantum and would have deserved a seat in senate.

Question 2.
Compile a list of some of the towns, cities, rivers, seas and provinces mentioned in this chapter and then try and find them on the maps. Can you say something about any three of the items in the list you have compiled?
Answer: 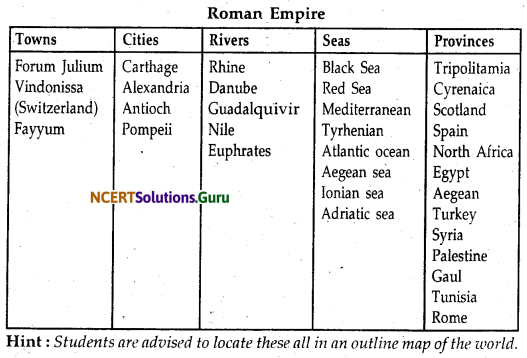 Our Description About The Three Items

1. Provinces— The period during first to early third centuries, the army and administration were drawn from the provinces and upper class of provinces replaced the senatorial class because of support they received from the emperors.

2. Cities— A city in the Roman sense was an urban centre with its own magistrates, City Council and a Territory containing villages which were under its jurisdiction. A city could not be upgraded by merging territory of another but villages could be upgraded to the status of cities and vice-versa depending on favour by the emperors.

3. Rivers— Rivers played an important role in the prosperity of the Campania, Sicily, Fayum, Galilee, Tunisia, Southern Gaul and Baetica the most fertile for growing olive trees, wheat etc. and helped their export between the provinces. These rivers were the Nile, Rhine, the Danube, the Guedalquivir and Euphrates.

Question 3.
Imagine that you are a Roman housewife preparing a shopping list for household requirements. What would be on the list?
Answer:
Shopping list of household goods
Eatables— Wheat flour, olive oil, barley, lentils, peas, wine.
Clothes— made of silk, different style.
As only the above things have been described in the theme, we cannot mention anything more than the above here.

Question 4.
Why do you think the Roman government stopped coining in silver? And which metal did it begin to use for the production of coinage?
Answer:
The silver mines in Spain were exhausted hence, there was short supply of silver and government ran out of sufficient stocks of the metal to support a stable coinage in silver. Another metal used by Constantine therefore, was the gold which had an ample availability there.

Question 5.
Suppose the emperor Trajan had actually managed to conquer India and the Romans has held on to the country for several centuries. In what ways do you think India might be different today?
Answer:
The contemporary historian Cassius Dio to Trajan, the emperor of Roman empire described that he (the king) launched a campaign and marched down with his troops down the Euphrates to Ctesiphon, the Parthian Capital and then to the head of the Persian Gulf in 116 CE.

Had he crossed the Persian Gulf and entered into India, there would have come certain changes in almost all the fields of art, science, astronomy, graffiti and science as also in architecture. We can give a. brief account of changes as under

In architecture— Public baths would have been constructed, we would have seen massive aqueducts like Pont Dugard in France, amphitheater, dining halls, piazzas with columns.

In arts — The famous mosaic as we read about in Edessa (Syria) would have decorated all our historical monuments in India.

In Administration — Aristocracy in the nameof Principate would have managed the state affairs here and three organs of governments would the emperor, the senate and the Army.

In economy — Denarius and solidus coins would have adopted here like Roman empire and frequent mutiny by army would have taken place. System of taxation on provinces and subordinated kingdoms would have imposed and a number of urban centres emerged. Peasantry would have suffered much due to collection of grains produced.

Society — India Succession (Reforms) Act, 2005 as passed now would have ab-initio given effect here and it would have made the females able to get a share in property of their fathers, but husbands authority not transferred to them. However, the divorce system just on notice of intension would have shattered the families here.

India bestows honour to woman since the beginning but had it under control of Roman empire; those would have beaten by their husbands as described by saint Augustine (354-430CE) about the harsh treatment of his father to his mother and his siblings. People would have consumed wine in all nuclear families leaving children and spouses helpless and orphan like.

Conclusion— Thus, we conclude here that India would have suffered a lot on several counts viz. family, society, slavery, intermixture of culture and oppression by the senators i.e. nobles, army and the prefect of urban centres. In brief, there would left no identity so specific as we enjoy today. However, in the field of architecture, astronomy, astrology and arts, we would have achieved top position in the world.

(ii) Much or less we see the effect and intention of passing Indian Succession (Reforms) Act, 2005 in the Roman society where women remained a primary heir of her father.

(iii) Modern trend of being husband and wife not one but two financial entity and complete legal independence, we would observe in the Roman society.

(iv) There was no place for tolerance between spouse as mere a notice of intent to dissolve.the marriage by either husband or wife was. suffice for divorce. This trend we see in modern society amply, as the divorce cases are frequently piling at the courts.

(v) Alike today we see, the Roman society was formed of Princep (the leading citizen), the senate (a body nominated by nobility), the knights respectable section of the people (attached to great houses), and unkempt lower class (addicted to the circus and theatrical displays). If we go in depth to this formation, resemblance of it to modem society is all apparent.

Here we see Presidents as Princep however, nominal head unlike the Roman period in which he was enjoying real power under a facade (viz just reverse). Senate here resembles to Rajya Sabha elected indirectly by MPs but of less power than Lok Sabha as in Rome. Again knights here are the Chairmen of business houses, College Principals, Professors, Municipal heads etc. who participated in election of President, Governor, members of Rajya Sabha and legislative councils.

The unkempt lower class addicted to theatres etc. pastimes are also here but with some difference because the populace have given them the most importance and we can not say them unkempt but the wealthiest people in the society. The populace has no hesitation to elect them as MLA, MPs, i.e. this section has now superceded gradually, the senate of then but presently, these we see as knights (i.e. respectable section of the people). This part of society includes also the robbers, pirates and murderers not yet convicted in the courts. Thus, we see apparent resemblance here.

As Olympiodorus, a historian of There says, this section of society or integral part of Aristocracy was receiving four’thousand pounds of gold per year excluding grain, wine and other produce which if sold, would have around to one-third of the income in gold; much or less the same position is being enjoyed by these modern people.

Besides above modern characteristics, we see that silver and gold corns had been circulated in Roman empire.