Line By Line Analysis Of The Inchcape Rock By Robert Southey 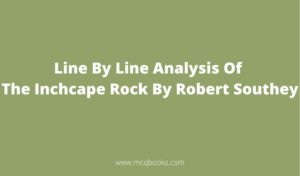 Background Of The Inchcape Rock

Robert Southey composed the poem for the Morning Post, but it was not published until 1802. This poem was written somewhere between the period of 1796 to 1798.

It remained uncorrected among many papers for ten years. At last, it was published in 1812. Southey was inspired by the legendary story of a pirate who removed a bell on Inchcape Rock placed by Abbot of Arbroath.

About The Inchcape Rock

The poem takes place near a notorious sandstone reef about 18 Km. off the east coast of Scotland. The whole poem is written in a ballad form.

The poem acquaints us how a pirate removed the bell from the Inchcape Rock and subsequently got killed justifying the divine judgement. The poem gives us a message that those who do wrong things will meet due punishment.

The Inchcape Rock A Poem Of Poetic Justice

The Inchcape Rock” is a perfect embodiment of Poetic Justice. We come to know about the story of the Rock legend. Abbot of Aberbroath, a monk placed a bell on the dangerous reef to warn the ships and mariners.

But one day wicked Ralph; the pirate removed the bell and turned the dangerous reef again a death trap for him. But we once get to see the poetic justice to play in the story at the end when wicked Ralph himself was going through that area.

His ship could not assess the dangerous reef and turned out to be a victim of the deadly reef. And thus the poetic justice was made.

The Inchcape Rock – A Ballad

If a Ballad means a long narrative poem which tells a story, then “The Inchcape Rock is a ballad which fulfils the characteristics of a story. The poem is a big one with seventeen stanzas acquainting us with a didactic story.

Here we come across a pirate who cuts the bell placed on a sand reef to warn the mariners and the ships against the peril and how the pirate on another day falls prey to the divine justice.

The atmosphere of the sea is calm and quiet. There is no movement in the air. The ship was devoid any threats of story wind. The sails of the ship had been silent and keel of the ship was steady and strong in the ocean.

This is the place of dangerous Inchcape Rock. As there is no movement in the air, the waves have died down and no sound could be heard from the Inchcape bell.

1) Repetition – ‘So little’
2) Antithesis – So little they rose, so little they fall
3) Personification – Here waves are referred as ‘They’

This talks about the great monk Abbot of Aber Brothok and his benevolent deed of placing the warning bell over Inchcape Rock. He placed it on a buoy.

Whenever stony waves will initiate, this bell starts making warning sounds and thus warns the mariners and their ships from the shipwreck.

1) Inversion – On a buoy in the storm it floated and swung.

This stanza talks about the utility of the bell. When there is high tide and when it becomes impossible to locate the Inchcape Rock by mariners, the sound of the bell warns the mariners about the perilous rock and they get warned. Then thus they used to get saved by the bell, they used to bless Abbot of Abber Brothok for this noble deed.

This fifth stanza talks about the jubilant weather. It was a bright sunny day. Everything of nature seemed to be mirthful on that day. The sea birds are screaming while flying around and the sounds created by them were filled with joy.

This sixth stanza tells us about the buoy and Sir Ralph’s approach to the Inchcape Rock. The buoy of the Inchcape bell is visible like a darkness speck on the green ocean. Sir Ralph walked over his deck and set his eye or the buoy.

1) Inversion – A darker speck on the ocean green.

This stanza shows how Sir Ralph was joyous over the pleasant spring weather and how he had the wicked intention. Sir Ralph is found at the utmost peak of mirth. He is singing and whistling. But this mirth is actually his wickedness.

In the eighth stanza we see the real wickedness of sir Ralph. He looked intently at the Inchcape Rock. Then he ordered his men to take him to the Inchcape Rock by boat. He made up his mind of bringing an end to the benevolent work of Abbot of Aber Brothok

1) Inversion – And to the Inchcape Rock they go.

This stanza shows how the bell drowned and comments of
Sir Ralph over this. With a gurgling sound the bell sank down. There had been
bubbles while the bell drowned. Sir
Ralph said that moon would ever thank Abbot of Abber Brothok after that act.

This stanza gives us a gap in time. Sir Ralph, the
rover has become rich by looting a lot of the ships and now he is heading
towards the shore of Scotland.

This stanza talks about a day which is troubled with ill weather. The sun is not visible as because of hazy sky. Throughout the day wind had blown like a storm. At the evening the wind died away signifying the approach of a horrible storm.

Sir Ralph is found standing on the deck. The atmosphere is so dark that they cannot see anything. Sir Ralph is optimistic that soon there will be a change in the weather in positive. He assumes that it was down and moon will soon be seen.

Poetic Device in use

1) Inversion i) on the deck, the Rover takes his stand
ii) so dark it is they see no land.

This stanza is the beginning of the end. One of the sailors stated that he could hear the breaker’s sound. This signifies that shore is very near. He further states that he does not have any idea where they stand with the ship. But he had strong wish if he could hear the warning sound of the Inchcape bell.

This stanza fulfils the poetic justice. Because of high waves they heard no sound. In spite of the fact that the wind has fallen they drifted along and they received the shivering shock. Immediately they understood that their ship had hit the Inchcape rock. They called for the Christ as the son of God.

This is the time for sir Ralph to go mad. He almost tore his hair in frustration and cursed himself in despair. Water waves started to enter the ship and started to engulf the ship. The ship started to drown beneath the high tide.

Here sir Ralph goes through his dreadful
hallucinations. In his dying fear as if he could hear the ringing sound of the
Inchcape Bell of Abbot of Aber Brothok. He felt as if the death bell was rung
by Devil himself.

1) Inversion – One dreadful sound could the
Rover hear.

The poem “The Inchcape Rock”, is a poem of 68 lines divided into 17 stanzas of 4 lines each. It follows the rhyme scheme of aabb throughout the poem. We find extensive use of Alliteration, Inversion, Imagery, Anaphora and personification in the poem.

What is the main idea of the Inchcape Rock by Robert Southey?

Like many of Southey’s ballads “The Inchcape Rock” describes a supernatural event, but its basic theme is that those who do bad things will ultimately be punished accordingly and poetic justice done.

What is the summary of the poem The Inchcape Rock?

The poem Inchcape Rock by Robert Southey is a ballad describing the bitter end of those who commit to evil set in 14th Century Scotland. It talks of a bell being installed on the Inchcape rock for warning the people and sea-farers about the reef near the Scottish coast.

What kind of poem is The Inchcape Rock?

It is a didactic poem. A didactic poem always delivers a moral teaching or lesson for the mankind. This poem also has one, though not directly but through a legendary tale.

What is the setting of the poem The Inchcape Rock?

The Inchcape Rock by Robert Southey is a ballad that tells us about the legends of the Inchcape Rock, a reef in the North Sea about 18 km off the east coast of Angus, Scotland. The story is about the good Abbot of Aberbrothok and the devilish Sir Ralph the Rover.

Why is Inchcape Rock a didactic poem?

A didactic poem is one that is written with a purpose of teaching a moral/ lesson to the reader. ”Inchcape Rock’ is a didactic poem in which Robert Southey juxtaposes the good and the evil to highlight the point that good begets good. … Inchcape rock is a reef which causes shipwrecks during high tides.