Line By Line Analysis Of I Know Why The Caged Bird Sings By Maya Angelou ICSE Class 9, 10 English Literature 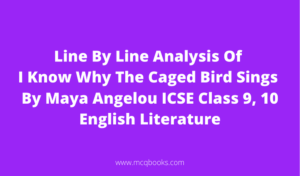 Maya Angelou was an acclaimed American poet, storyteller, singer, memoirist and autobiographies. She was born Marguerite Johnson in St. Louis, Missouri on April 4, 1928. She is widely regarded as the “ Black Women’s Poet Laureate”. She spent much of her childhood in there of her paternal grandmother in rural Stamps, Arkansas. When she was nearly eight years old, she was ravished by her mother’s boyfriend and told of it, after which he was murdered; the traumatic situation left her dumbstruck for nearly five long years! She was best known for her seven autobiographical books:

which was nominated for the Nation Book Award. Her poetry: Just Give Me a Cool Drink of Water ‘fore I Diiie’(1971), was nominated for the Pulitzer Prize. Her autobiographies reflect the themes of economic, racial and sexual oppression. She found encouragement for her literary talents at the Harlem Writers’ Guild

Among numerous honours was her invitation to compose and deliver a poem, “On the Pulse of Morning”, for the inauguration of U.S President Bill Clinton in 1993. One of her famous quotes is “ There is no agony than bearing an untold story inside you”. These lines portrayed her utmost zeal to voice her opinions. Further, critic Robert B. Stepto praises her for borrowing “ various folks rhythms and forms and thereby buttresses her poems by evoking aspects of a culture’s written and unwritten heritage”.

The poem “ I Know Why the Caged Bird Sings” also known as “ Caged Bird” was published in the year 1983 in the poetry collection “Shaker, Why Don’t You Sing?” It describes the early years of the American writer and poet and conveys the notion of how the strength of character and love of literature can help overcome racism and trauma. It is said that the writers James Baldwin and cartoonist Julie Feiffer inspired
her to write this famous workpiece. The poem can be seen as a portrayal of social disparity, and the ideals of freedom and justice. Angelo, with the use of metaphorical birds, represents the inequality of justice seen in the society of her time which differentiates between the African-American community and its White counterparts. It is a heart-wrenching poem that reflects on the mindless oppression the Blacks were subjected to back in olden days. Maya Angelou takes her title from Paul Lawrence Dunbar’s poem entitled Sympathy. Dunbar’s caged bird sings from the frustration of imprisonment; its song is a form of prayer. In addition, Angelou’s caged bird sings also from frustration, in doing so, she uncovers the fact that the song transforms the cage from a prison that denies selfhood to a vehicle for self-realization.

on the back of the wind

till the current ends

and dips his wing

in the orange sun rays

and dares to claim the sky.

But a bird that stalks

down his narrow cage

can seldom see through

his bars of rage

his wings are clipped and

his feet are tied

so he opens his throat to sing.

The free bird thinks of another breeze

and the trade winds soft through the sighing trees

and the fat worms waiting on a dawn bright lawn

and he names the sky his own

But a caged bird stands on the grave of dreams

his shadow shouts on a nightmare scream

his wings are clipped and his feet are tied

so he opens his throat to sing.

The poem is a free verse. There are a total of six stanzas in the poem with the third stanza being repeated at the end. Each line begins with a capital letter and the rest are in small letters. The poet has not used any comma, semicolon at the end, indicating the rhythmic flow of the verse. Angelo does not allow meter, rhyme, and stanza to control her poetry. She allowed the unrestricted flow in the sentences to intensify the importance of freedom in life. In the 36 lined poem, all the lines are very unembellished which helps to convey the complete meaning. In each sentence of the poem, the noun is placed in front of the verb, which might be because the poet wanted the readers to focus on the differences between the lives of the two birds that are caged and free and bring out their different dreams. This poem derives its power from rich vibrant imagery that encourages the readers to appreciate and interpret the poem in a variety of ways. The number of syllables in each line is inconsistent. There is a repetition of the word “freedom”. Also, the third stanza is also repeated at the end which brings out the importance of freedom in the life of every being.

Literary Devices Of The Poem

There are many poetic devices in the poem. Some of them are discussed below:-

1. Metaphor – A figure of speech in which a comparison between two different things is implied, but not clearly stated.
Examples in the poem are:

2. Repetition – The third stanza is repeated at the end.

4. Hyperbole– It is identified as an extravagant exaggeration, not to be taken literally but used figuratively to create emphasis.

5. Allusion– The title of the poem is a reference to Paul Laurence Dunbar’s poem “Sympathy”.

Theme Of The Poem

There are various themes of the poem and it touches a wide arena of perspectives.

1. Freedom versus Enslavement: The theme of freedom and confinement I.e. enslavement is prominent throughout the poem. The portrayal of the free bird living a life of phenomenal joy and liberty stands for freedom, while enslavement is symbolized by the shackled life of the caged bird whose “wings, are clipped and his feet are tied”.

The poem begins with a free leaping bird gliding in the open sky and is exposed to all the pleasures of freed self.

on the back of the wind

However, the caged bird lives an enslaved life in a “narrow cage”. It represents the social disparity between the Whites and the African-American communities during the times of the Civil War

Moreover, the free bird is aware of its freedom and dares to claim the sky it’s own. It flies through the orange hue of the sky and dips its wings. With the use of the colour imagery of orange rays, the effect heightens -as orange is a colour associated with glow and contentment.

The free bird thinks of another breeze I.e. the wishes to get the most of his liberty and also feeds on “ fat worms”; on the contrary, the only thing attainable for the caged bird is his voice through which it can sing his song of unmeasured melancholy. Singing is symbolic of his rebellion against oppression. The idea of freedom is “unknown” to him yet the bird yearns for the long awaiting enjoyment. An abolitionist Frederick Douglass once said, “ Slaves sing most when they are most unhappy”. The poem ends on a positive remark as the voice of the caged bird is heard on a distant hill “ and his voice is heard on a distant hill”.

Racism and Slavery: The poem conveys the pent up sentiments of the poet against racial discrimination and social injustice in the form of slavery which was prevalent in America in the Civil War era. Though the poet never mentions it directly. The “free” bird represents the privileged Whites whereas the “caged” bird an extended metaphor depicts the enslaved African – American community of America. It captures the overwhelming agony and barbarity of oppression of the marginalized communities by relating it to the misery of the forever caged bird. Until 1965, under a system of racial segregation, named “ Jim Crow” the blacks of the Southern United States, lived in poverty. They were denied basic needs like the right to vote, public transport owing to their colour.

The caged bird is the reference to the social, mental suffering of the African-American Blacks. The bird could not fly on his own will and ambition.