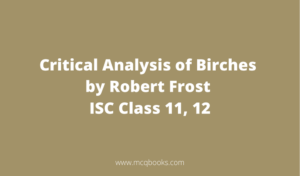 Robert Lee Frost, widely known as Robert Frost was one of the most notable American poets born on 26 March 1874 in San Francisco, California, USA. He is popular for his vivid portrayal of rural life of New England, American colloquial language, and the realistic portrayal of everyday situations of common people.

Born to William Prescott Frost, Jr., an ambitious journalist and mother Isabelle Moodie Frost, his life was never devoid of ups and downs. He moved from job to job, from working in mills to newspaper reporting then to teaching. He also turned farming at hand. He grad ted from high school in 1892 and got enrolled at Dartmouth College in Hanover, New Hampshire, 1892. He later went to Harvard University in Boston but moved out after 2 years– never earning a formal college degree In spite of all these hardships, Robert’s deep interest in poetry bore fruitful results in the year 1894 by the publication of his first poem My Butterfly: An Elegy in The Independent, a weekly journal. He then moved with his wife, Elinor White, with whom he had shared his valedictorian honours to England in 1912. There he met Ezra Pound, who helped him considerably to promote and publish his work. Then came his two most promising works– A Boy’s Will (1913) and North Boston(1914) which established his reputation. His other notable works include The Road Not Taken, The Death of the Hired Man, Stopping by Woods on a Snowy Evening, Mending Wall, New Hampshire and others.

Robert have been lauded with several accolades ranging from Bollingen Prize (1962) to 4 Pulitzer Prize. Also, he was the first of only five poets to get the opportunity to recite a poem at a U.S presidential inauguration. The American Senate has also passed a resolution in remembrance of the great soul on his 75th birthday.

Robert Frost left for heavenly adobe at the age of 88 on 29 January, 1963 at Boston, Massachusetts and has left behind a great legacy to be remembered.

Birches by Robert Frost is a beautiful poem celebrating youth, nostalgia, spirituality, escapism and transcendental state. C.D Lewis feels that one should begin one’s study of Frost with this poem. Some others have criticized the poem on the basis of the poet’s philosophical stance as it’s a serious weakness. However, this poem is far above the fond ramblings of a nature lover. Through the poem, the poet has attempted to achieve a balance between the two different worlds. Using Birches as an extended metaphor poem aims one to achieve their own harmony.

Originally titled as ‘ Swinging on Birches’– one of Frost’s early publication in 1916 right in the backdrop of World War I. It attempts to comfort us in troubled times, telling us to embrace the subtle pleasures of life and find solace. It reflects a theme if escapism to transcendence.

The first person conversation style, dramatic monologue – takes us into woods and close up to the heaven. The poem can be divided into four categories:

Beginning in the present – When I see (line 1)

· Moving on into the past- Often you must have seen ( line5)

The poem gives us a perfect example of Frost’ blank verse creation. It is one long journey of the speaker’s relation to truth- naturalistic, personal, philosophical. By opting the tree as a vehicle for potential transcendence, a means of temporary escapism, Frost taps into the mythological and biblical repositories in the poem.

Birches shows how the life of an ordinary modern man ( ‘a pathless wood’) is full of worries, anxieties, doubts and confusions:

Where your face burns and tickles with the cobwebs

Broken across it, and one eye is weeping

From a twig’s having lashes acted it open.”

It is to shove the bitterness of this earthly life that the poet recommends going up in the higher world of imagination, even though momentarily.

When I see birches bend to left and right
Across the lines of straighter darker trees,
I like to think some boy’s been swinging them.
But swinging doesn’t bend them down to stay
As ice-storms do. Often you must have seen them
Loaded with ice a sunny winter morning
After a rain. They click upon themselves
As the breeze rises, and turn many-colored
As the stir cracks and crazes their enamel.
Soon the sun’s warmth makes them shed crystal shells
Shattering and avalanching on the snow-crust—
Such heaps of broken glass to sweep away
You’d think the inner dome of heaven had fallen.
They are dragged to the withered bracken by the load,
And they seem not to break; though once they are bowed
So low for long, they never right themselves:
You may see their trunks arching in the woods
Years afterwards, trailing their leaves on the ground
Like girls on hands and knees that throw their hair
Before them over their heads to dry in the sun.
But I was going to say when Truth broke in
With all her matter-of-fact about the ice-storm
I should prefer to have some boy bend them
As he went out and in to fetch the cows—
Some boy too far from town to learn baseball,
Whose only play was what he found himself,
Summer or winter, and could play alone.
One by one he subdued his father’s trees
By riding them down over and over again
Until he took the stiffness out of them,
And not one but hung limp, not one was left
For him to conquer. He learned all there was
To learn about not launching out too soon
And so not carrying the tree away
Clear to the ground. He always kept his poise
To the top branches, climbing carefully
With the same pains you use to fill a cup
Up to the brim, and even above the brim.
Then he flung outward, feet first, with a swish,
Kicking his way down through the air to the ground.
So was I once myself a swinger of birches.
And so I dream of going back to be.
It’s when I’m weary of considerations,
And life is too much like a pathless wood
Where your face burns and tickles with the cobwebs
Broken across it, and one eye is weeping
From a twig’s having lashed across it open.
I’d like to get away from earth awhile
And then come back to it and begin over.
May no fate willfully misunderstand me
And half grant what I wish and snatch me away
Not to return. Earth’s the right place for love:
I don’t know where it’s likely to go better.
I’d like to go by climbing a birch tree,
And climb black branches up a snow-white trunk
Toward heaven, till the tree could bear no more,
But dipped its top and set me down again.
That would be good both going and coming back.
One could do worse than be a swinger of birches.

The poem Birches is written in a blank verse consisting of 59 lines, a stichic – a poem with no stanza breaks. In spite of its no break structure, it can be divided into three parts:

1. Observations and wide portrayal of trees bent in ice- storms.

3. The man’s dream of escaping versus his awareness of the claims of both “ earth” and “ heaven” hereby seeking temporary transcendence.

The poem follows iambic pentameter but not the usual da-DUM da-Dum da-DUM da-DUM da-DUM beat. It is unrhymed and a metrical feet that have two syllables, one unstressed followed by stressed. The line length is determined by the rhythm of movement. The rhythm is slow and steady when the poet indulges in moralising:

‘ It’s when I’m weary of considerations,

And life is too much like a pathless wood.’

Literary Devices In The Poem

There are several figures of speech in the poem Birches by Robert Frost. These includes:

1. Sibilance Hissing sounds that come from words with s, z, sh and zh.

2. Onomatopoeia It is the figure of speech in which the sounds of the words convey the sense. Examples include:

3. Simile– Examples in the poem are:-

· “trailing their leaves on the ground

Like girls on hands and knees that throw their hair

Before them over their heads to dry in the sun.”

Where your face burns and tickles with the cobwebs”

· “ trailing their leaves on the ground”

· “Half grant what I wish and snatch me away”

5. Contrast – There are a no. of contrasts in the poem:

· “Summer or winter, and could play alone”.

· “black branches up a snow-white trunk”

· “both going and coming back”

7. Symbols – Birches provide the most appropriate symbols in the poem. Their upward movement is symbolic of higher ideals and spiritual aspirations, while their downward movement is suggestive of coming back to the earth to do widely duties, or the world of reality, from which there is no escape. ‘Heaven’ symbolizes the world of fancy or some perfect world. ‘ swinging’ is symbolic of wavering between reality and imagination. “ pathless wood” symbolises directionless voyage of life.

8. Alliteration – The close repetition of the consonant sound is referred to as alliteration. Examples include:

· That would be good both going and coming back.

9. Imagery – There are various imageries in the poem.

· Such heaps of broken glass to sweep away

· ….trailing there leaves on the ground

Theme Of The Poem

Reality versus Fancy: There are various themes in the poem ranging from memories, nostalgia, nature. Here, we take up the prominent theme of truth and fancy which is evidenced throughout the poem.

Robert Frost is well known for his beautiful nature poems. The poem begins with the narrator thinking of bending the birch trees. The poetic imagination surpasses the thresholds of the material world. The fanciful explanation of his own to the bending but his is one such example. Gradually, he goes on to imagine a lot more things. In the later part of the poem, he raises a wish to escape from this world of chaos but quickly after the thought of escapism, he reconciles to the idea of reality and understands that there is no real escape from life and it’s responsibilities.

The real world might be a place of pain, but it is also the place for love. The imaginary world is innocent but it is solitary and loveless. The point that should we live in the world imagination or in the world of reality is the question emphasised of the poem.

The poet’s desire to go up with the branch of a Birches is symptomatic of our desire to escape from the world of harsh realities. But he does not want to remain in the world of fancy forever:

“ I would like to get away from the earth awhile\ And then come back to it and begin over… … … …. \ Earth’s the right place for love.”

Here, we are reminded of Keats’s similar desire in his ‘Ode to Nightingale’. Even when we ‘escape’ from our troubles we should keep in mind Keats’s message that ‘the poetry of earth is never dead.’

This is what Frost has tried to emphasize in his poem I.e. the dominant theme escapism, on the other hand, it’s subsequent step back to the worldly responsibilities and truth behind life’s existence.

“ That would be good both going and coming back.”