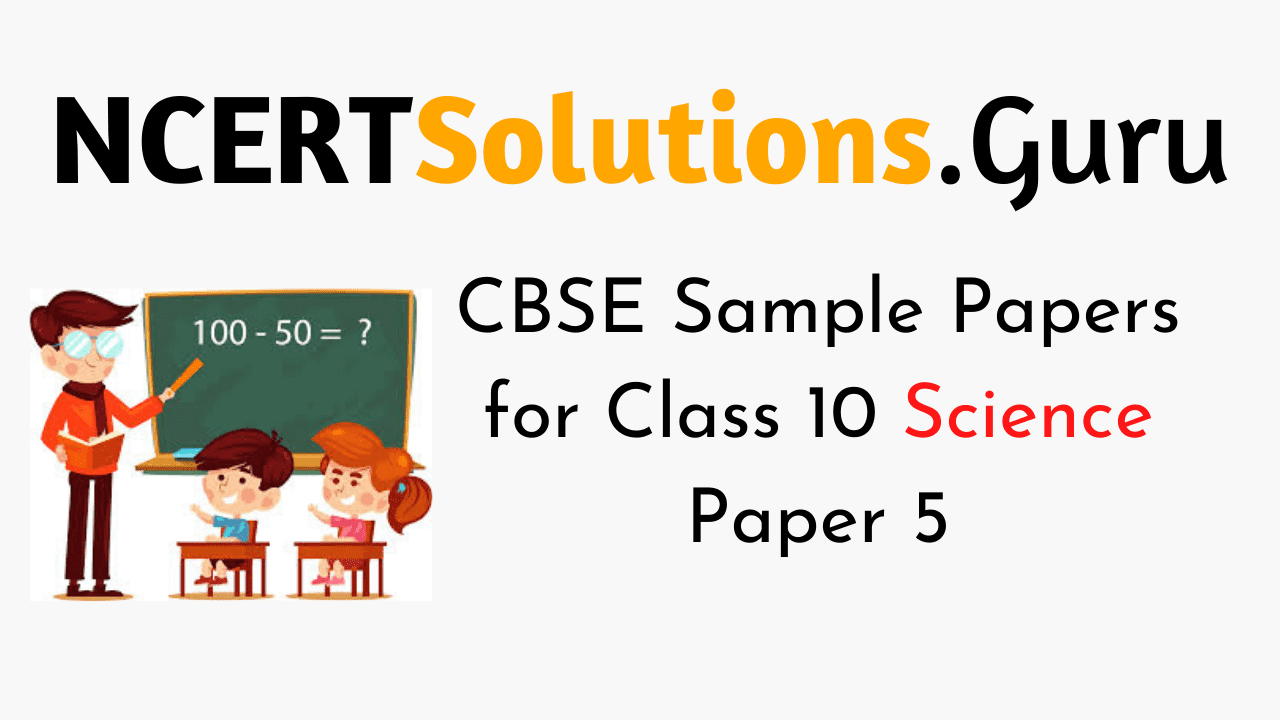 Question 1.
Where are guard cells found and what is their function ?  [1]

Question 2.
What are the large number of filtering units found in the kidney known as ?  [1]

Question 4.
When you look at a lemon kept inside water in a glass dish it appears bigger than its actual size. Can you explain why ?  [2]

Question 5.
What kind of movement is seen in the roots of plants ?  [2]

Question 6.
Show by ray diagram the nature, position and size of the image formed by a convex mirror when the object lies between infinity and pole of the mirror.  [3]

Define magnification produced by spherical mirrors and how does it help us in finding out if an image is real or virtual ?

Question 7.
On what factors does the strength of an electromagnet depend ?  [3]

Question 8.
Why acids do not show acidic behaviour in the absence of water ?  [3]

Question 9.
Why is carbon able to form a large number of molecules ?  [3]

Question 10.
Why are forests called biodiversity hotspots ? Who are the stakeholders in the conservation of forests ?  [3]

How can you as an individual contribute or make a difference to the management of:

Question 11.
How is self-pollination different from cross-pollination ? Give examples where we find them.  [3]

Question 12.
Compute the heat generated while transferring 96000 coulombs of charge in one hour through a potential difference of 50 V.  [3]

Question 13.
How does the electronic configuration of an atom relate to its position in the Modem Periodic Table ?  [3]

Elements have been arranged in the following sequence on the basis of their increasing atomic masses.

(a) Pick two sets of elements which have similar properties.
(b) The given sequence represents which law of classification of elements ?

Question 15.
State the changes that take place in the uterus when:  [3]
(a) Implantation of embryo has occurred.
(b) Female gamete or egg is not fertilised.

Question 16.
An electric lamp, whose resistance is 20 Ω and a conductor of 4 Ω resistance are connected to a 6 V battery. Calculate:  [5]

Question 17.
What are the properties of ethanoic acid ?  [5]

Question 18.
Human beings are on top of any food-chain. Is this harmful to humans in the long run ? Does the term biological magnification apply here ?  [5]

Question 19..
Sometimes after a shower of rain we can see a colourful rainbow. Explain its formation on the basis of reflection, refraction or dispersion.  [5]

Question 20.
What is thermal decomposition ? Are decomosition reactions opposite of combination reactions ? Show with examples.  [5]

Question 21.
What are the different methods of contraception ?  [5]

Why is the process of menstruation necessary ?

Question 22.
What is an alloy ? Name some things made up of alloys that we use daily.  [2]

Question 23.
An element has an atomic number of 6 and a mass number of 12. Find out which group and period it belongs to. [2]

Question 24.
How is sex determined in human beings ? Show with the help of chromosomes.  [2]

Question 25.
When we chew bread it tastes sweet. Why ? What is the role of saliva in digestion of food ?  [2]

Question 26.
Show the path of light through a triangular glass prism with a neat labelled diagram.  [2]

Draw a ray diagram to show the principal focus of a concave mirror.

Answer 1.
Guard cells are found on either side of the stomata on the surface of leaves. Stomata are small pores through which gaseous exchange and evaporation of water takes place. The bean shaped guard cells swell when water flows into them causing the stomata to open. Similarly when the guard cells shrink the pore closes.

Answer 2.
The large number of filtering units in the kidney are known as nephrons. Each nephron has two parts, renal corpuscle and renal tubule. The renal corpuscle consists of a bunch of capillaries called glomerulus present in a cup shaped structure called Bowman’s capsule.

Answer 3.
An alloy is a homogeneous mixture of two or more metals or a metal and a non-metal. It is prepared by first melting the primary metal and then dissolving the other elements in it in definite proportions. It is then cooled to room temperature. Alloying helps to get the good qualities of all the constituents. Some well-known alloys are brass, bronze, solder and amalgam.

Answer 4.
Yes, when we look at a lemon kept inside water in a glass dish it appears bigger than its actual size. This is because of the process of refraction. Light rays, as they pass from air to the water below tend to bend towards the normal at the point of interface.

Answer 5.
The roots of plants show trophic movements. Roots tend to move towards gravity and water so they are said to be positively geotropic and hydrotropic. Roots move away from sunlight and hence are said to be negatively phototropic.

When the object lies between infinity and the pole of the convex mirror the image is virtual and erect, between P and F behind the mirror and diminished in size.

Answer 7.
The strength of an electromagnet depends on the following factors:

Answer 8.
Acids do not show acidic behaviour in the absence of water. This is because the H+ions are produced only in the presence of water. The H+ ions cannot exist alone but they exist only after combining with water molecules.
If water is added to HCl the reaction occurs as follows:

The separation of H+ ions from the HCl molecule cannot occur in the absence of water. The process of dissolving acid in water is highly exothermic. The acid must be slowly added to the water with constant stirring, water must not be added to the acid.

Answer 9.
Carbon has the unique ability to form bonds with other atoms of carbon giving rise to large molecules. This property is called catenation. We can find compounds with long chains of carbon or even carbon atoms arranged in a ring. In addition carbon atoms can be linked by single, double or triple bonds. As carbon is tetravalent it forms covalent bonds with four other atoms of carbon or atoms of some other monovalent element. These bonds are very strong and so the elements are very stable. Compounds of carbon which are linked by only single bonds between carbon atoms are called saturated compounds. Compounds of carbon having double or triple bonds between their carbon atoms are called unsaturated compounds. No other element exhibits the kind of catenation seen in carbon. This is why we see such a large number of compounds with many carbon atoms linked to each other.

Answer 10.
Forests are called biodiversity hotspots because they support a huge variety of life forms. The range of different life forms like bacteria, fungi, ferns, flowering plants, nematodes, insects, birds, reptiles make up the forest biodiversity. The stakeholders in the conservation of forests are:

(a) Forests and wild life:

Answer 13.
The electronic configuration of an atom gives us the atomic number of an element as the number of electrons is equal to the number of protons in the atom. The atomic number of an element is a more fundamental property than its atomic mass. The Modern Periodic Table has 18 vertical columns known as groups and 7 horizontal rows known as periods. The elements present in a group have the same number of valence electrons. In other words groups in the Modern Periodic Table signify an identical outer shell electronic configuration. Similarly in a period, the atomic number increases by one unit as we move from left to right. The position of an element in the table tells us about its chemical reactivity.

Answer 14.
Plant hormones are chemicals that help to coordinate growth, development and responses to the environment. They are synthesised at places far away from where they act and simply diffuse to the area of action. Some of the plant hormones are auxins, gibberellins, cytokinins and abscisic acid.

Answer 17.
Ethanoic acid is commonly called acetic acid and belongs to the group called carboxylic acids. The melting point of pure ethanoic acid is 290 K and hence it often freezes during winter in cold climates. So it is also known as glacial acetic acid. 5-8% solution of acetic acid in water is called vinegar which is used as a preservative in pickles. Carboxylic acids are weak acids.
Ethanoic acid reacts with ethyl alcohol in the presence of an acid catalyst to produce esters.

They are sweet substances used in making perfumes and as flavouring agents. Esters react in the presence of an acid or a base to give back the alcohol and carboxylic acid. This reaction is called saponification reaction. It is used in the preparation of soap.

Answer 18.
Human beings are on top of any food chain. This means the maximum concentration of several harmful chemicals get accumulated in the human bodies. This is also called biological magnification. We have seen how water is polluted by different substances. Pesticides and some chemicals are used to protect crops from pests. These enter the soil and the water that flows on this soil. When this water is absorbed by the roots of plants it enters the plants. Similarly when aquatic animals drink water some chemicals enter their bodies too.

These chemicals then enter the food chain. As they are not degraded they are gradually accumulated in each trophic level. Finally all of them reach the human bodies. Food grains like rice, wheat, vegetables, fruits, and meat contain varying amounts of pesticide residues. It is difficult to completely remove them by washing. Hence any organism at the top of the food chain is likely to get a fairly large amount of the harmful substances that enter the food chain at every level. So the effect of the various pollutants is maximised in human beings.

Answer 19.
A rainbow is a natural spectrum appearing in the sky after a rain shower. It is caused by dispersion of sunlight by tiny droplets present in the atmosphere. A rainbow is always formed in a direction opposite to that of the Sun. The water droplets act like small prisms. They refract and disperse the incident sunlight, then reflect it internally and finally refract it again when it comes out of the raindrop. The dispersion of light and internal reflection make different colours visible to the observer’s eye. A rainbow is also seen on a sunny day when we look at the sky through a waterfall or through a water fountain with the Sun behind us.

Answer 21.
The different methods of contraception come under different categories:

Menstruation is the monthly cycle in the female reproductive system where the unfertilised egg is shed along with the uterine lining once in 28 days. The female germ cells or eggs are made in the ovary. One egg is produced every month by one of the ovaries. The egg is carried from the ovary to the womb through the fallopian tube. The egg lives for about a day if it is not fertilised. As the ovary produces one egg per month the uterus also prepares itself to receive a fertilised egg every month. So it develops a thick and spongy lining. This would help to nourish the embryo and fertilisation take place. When fertilisation does not occur, this lining is not needed anymore. It breaks and slowly comes out through the vagina as blood and mucous. The menstrual cycle lasts for about three to five days. Thus menstruation is necessary to get rid of the unfertilised egg and prepare the next egg and uterus for a possible fertilisation and pregnancy.

Answer 23.
The element has atomic number 6 and mass number 12. This means it has 6 electrons around the nucleus. Its valency is 4 so it belongs to the 4th period and 4th group.

Answer 24.
In human being sex is determined by the Y chromosome of the father. 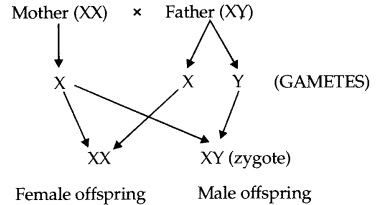 Answer 25.
When we chew bread it tastes sweet because the enzymes in saliva convert the starch in bread to sugar. Saliva helps in bringing together the chewed bits of food in the mouth and rolling them together into the bolus to be pushed into the food pipe. Saliva contains the enzyme salivary amylase that converts starch into sugar. 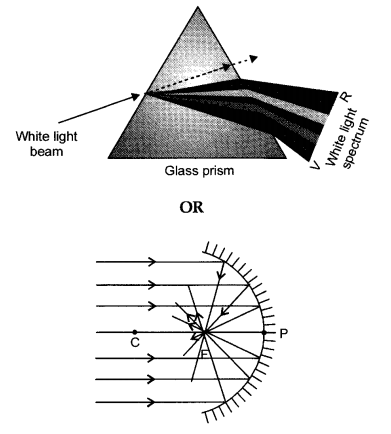